ToolGuyd > CNC Machines > My First CNC Router Project with a Shapeoko 3
If you buy something through our links, ToolGuyd might earn an affiliate commission. 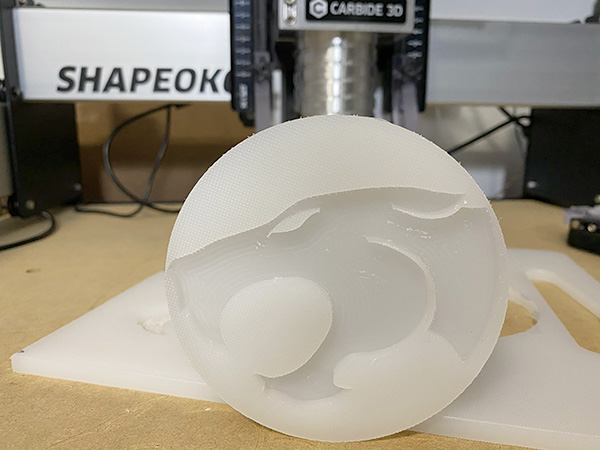 Voila, here’s my first CNC router project, a Thundercats emblem carved out of an Ikea cutting board!

I know, it’s not very glamorous or of any practical use, but it’s a start.

The Road to CNC Router Ownership

I wanted to buy a CNC router for quite a long time, and have been going back and forth for several years.

I flip-flopped constantly over this decision. A CNC router would help me build certain projects, and jigs such as router templates for use with handheld tools.

There are cheap CNC routers, affordable CNC routers, and higher quality “how much will that cost?!!” machines. The cheap ones are usually junk, requiring users to invest a lot of time into their machines rather than using them. The affordable ones have some limitations. Higher quality machines are more complex and much more expensive.

I’ve been holding out for a higher quality machine with sturdy framing and strong capabilities. But there is greater complexity – special spindles, specific software you are locked into using, and smaller ecosystems that could result in a steeper learning curve where I’d be mostly on my own. 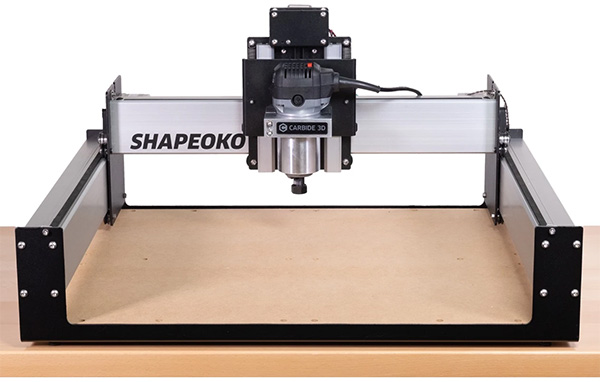 I ultimately settled on the Carbide 3D Shapeoko 3. I also ordered one of their smaller benchtop self-contained machines, the Nomad 883, because it more closely aligned with my needs and seemed more capable for higher precision work on smaller workpieces. I devised an elaborate editorial plan that justified it.

Here’s my rationale – the Nomad 883 could be an office machine, working out parts for ToolGuyd needs, and the Shapeoko 3 would live in the garage, doing all the larger workpiece 2D machine type of stuff.

I went with the Shapeko for two reasons – first, it seems more robust and thoughtfully designed than others on the market, and also because the inventor (now a part of Carbide 3D) left a very positive impression with me the few times we chatted via email a few years ago when I first inquired about an earlier generation machine.

I was offered an X-Carve machine for free a while back, but declined at the time due to lack of space. When I did have space, their PR changed and I was told they were out of samples. X-Carve vs. Shapeoko is a very common comparison when it comes to beginner CNC router machines, and Carbide 3D’s page on the matter sealed the deal for me. At the time of this posting, it doesn’t appear you can eve buy the smaller X-Carve 500 anymore, only their full-size model.

I opted for the smallest of their 3 sizes, figuring the smaller footprint and 16″ x 16″ working area would be enough. Maybe this would be all the CNC router I need. If not, I can upgrade to their XL or XXL kits in the future, as they do offer upgrade kits. Or, I could put that money towards a larger and more capable machine in the future.

I started assembling the machine more than a year ago, several months after I purchased it, and found that a rail was deformed and a v-wheel defective. They sent replacement parts promptly, but I struggled to find the time to take everything apart and swap things out. So, my partially-assembled machine sat on top of a large-enough tool box, and for a long time.

I finally got to getting my Nomad 883 and Shapeoko 3 operational these past few days, following two weeks of steady work cleaning and reorganizing my garage workspace.

I hit another snag, literally. The Shapeoko 3 doesn’t have much in the way of cable management, unlike the Shapeoko 3 XL and XXL machines, which have drag chains. I suppose for a machine this small, and with the electronics box located right behind the Z-axis, it’s not needed. But during rapid movement as I was getting to start on my self-designed tutorial process, the machine snagged and ripped the wires off the y-axis limit switch.

So, out came a soldering iron, where I quickly patched things up. I’ll likely have to redo this repair in the future with a little more finesse. But, it works and got me back on track.

Everything was also delayed because it turned out I was missing mounting hardware and custom brackets from a 3rd party dust collection attachment I ordered (from a different company) at the same time as the machine. I should have been more diligent in checking this when I first received it. I did see a hardware packet, but it turns out that only included the small clamps I ordered at the same time. An email to the company, and the missing “Suckit” dust shoe hardware was on the way.

You can probably tell, but I like things to be *perfect.* And when they’re not, my hesitation tends to become a firm barrier.

About Assembling and Running the Machine

Things aren’t quite perfect now – I need to build an enclosure, tame the wires a bit better, and find a way to support a dust collection hose so that I’m not hand-holding it the entire time – but the entire process did go smoother than I expected.

When I tried 3D printing for the first time, the machine I bought couldn’t print the test print, and I gave up. Here, despite the minor setbacks, the Shapeoko 3 assembly and setup was about as easy as I could have hoped for.

The first tutorial involved zip-tying a marker to the Dewalt router I clamped into the machine, and it worked perfectly.

Wow, was it really that easy??

Side note – Ben’s working on a Benchtop CNC Router Basics post, and so I’m deliberately avoiding going into too much detail here. He has one of the larger Shapeoko CNC router machines and far more experience with it. If you have questions, please ask away, and we’ll make sure they’re addressed here or in that post.

What to do next?

Getting the hardware up and running is Step 1. Next, I have to learn how to use the machine. There’s only so much you can learn by reading. I’ve read all about CNC router capabilities and shortcomings over the years, but this – actually starting a project – was new territory for me.

Oh, I have a lot of “this would be great for the CNC router!” projects in various stages of planning, but first I need to learn how to use the machine, as different factors can affect the 2D and 3D modeling processes and design approach.

Carbide 3D has their own software for modeling and machine control, called Carbide Create and Carbide Motion, respectively.

Rather than try to design something simple, I decided to find a logo to carve into an HDPE cutting board.

Actually, I started to work out my own simple 2D design first, involving concentric circles, but I quickly hit a roadblock when trying to work out the intent. All of a sudden, my circles turned into a bit holder and my desire to learn the machine started to require my also learning the design software instead. So why not start with something decorative? 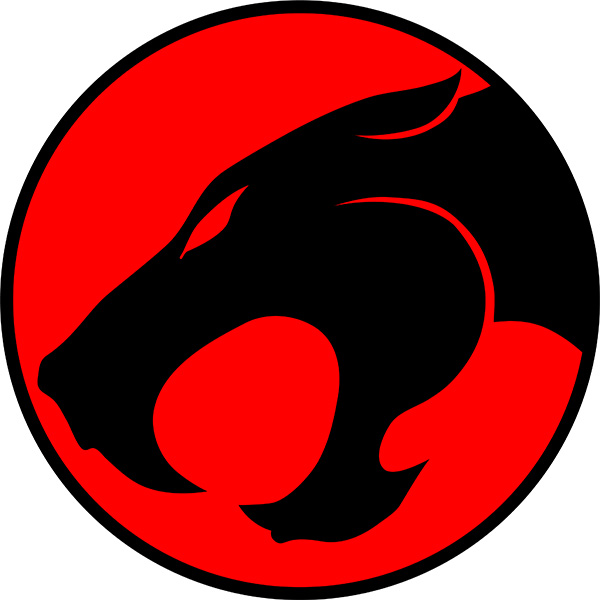 I conducted a Google Image Search for a Thundercats logo/emblem. If you click “advanced search,” you can opt for svg files. SVG files are 2D vector graphics, meaning they can be scaled and easily translated to machine code.

I could/should have simply done a similar carving with the ToolGuyd logo, but that would have required retrieving files from a different computer, rather than being able to do everything from the laptop I brought with me to the garage. If I went back in to another computer, I would surely have been distracted, pushing the project to another day. Future designs will likely be worked up and converted on a different computer, but for this tutorial-in-nature project, I went with the first “what I can do here and right now” idea.

You can create SVG files with free or paid software as well. Simply conducting a Google image search or general search for “keyword” and “svg” resulted in a mess of etsy listings and other marketplaces where they are selling such graphics. Opting for the Google advanced search where I selected svg as the file type brought up results where someone already did the hard work of tracing an image file into a vector graphic.

I did similar work in the past, when learning either Inkscape (free software) or Adobe Illustrator (paid software), and have all the files on a different computer somewhere. It’s not terribly complicated – you convert a jpg or other image file and then tweak nodes slightly if or where needed. But for this, I wanted an image that was ready to go.

Okay, so I had an svg file, imported it into Carbide Create, and scaled it down to fit in a 4″ x 4″ space.

The file had three shapes – the outer circle, the “cat” head, and the eye.

It then took some work with Carbide Create on how to figure out the toolpath commands. Ultimately, I realized selecting the cat head outline and the eye allowed me to pocket around the eye. 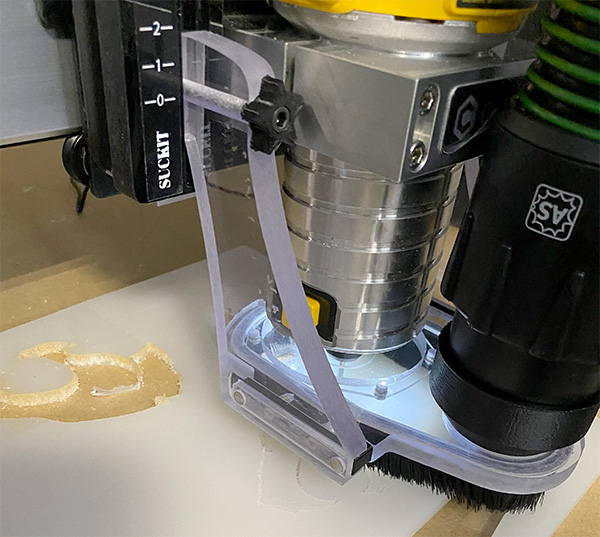 It took a few tries… 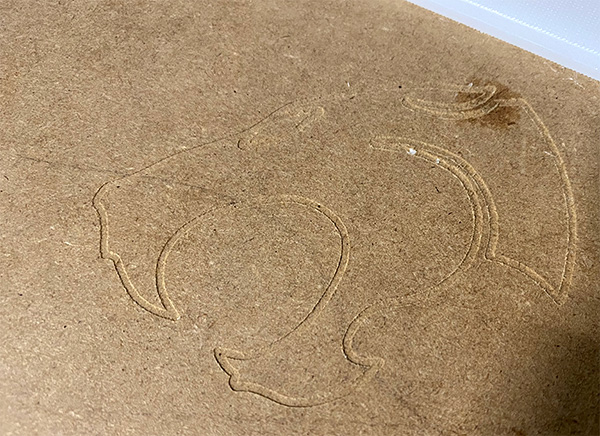 I also learned that I set my Z-axis off a little with the probe, resulting in a Thundercats symbol being engraved into my machine’s MDF support board.

The Ikea HDPE cutting board I was using (I have a lot of these, purchased for cheap jig, workshop, and project materials) is maybe 5/16″ thick.

I ran into trouble when I output everything as a single file, as there was no prompt for re-probing for Z-height zeroing between tooling changes. That could be a Carbide Motion limitation, or something I need to program in via G-code, which is output via Carbide Create for Carbide Motion to follow.

So, I used Carbide Create to output two files, Part 1 and Part 2.

This was done to create the shape for the eye, and for finer details for the cat head outline.

Much More to Learn

As with any tool, there is much more for me to learn.

But hey – this is a good start, right?

There is also much to do regarding optimizing the machine environment, such as adding in better user controls (such as a physical emergency stop), limiting dust, and lessening the noise output, but now that I have my first taste of what it can do, I’m not letting myself get hung up on small obstacles anymore.