ToolGuyd > New Tools > FLIR UltraMax is an Amazing Thermal Imaging Camera Resolution Enhancement Technology
If you buy something through our links, ToolGuyd might earn an affiliate commission. 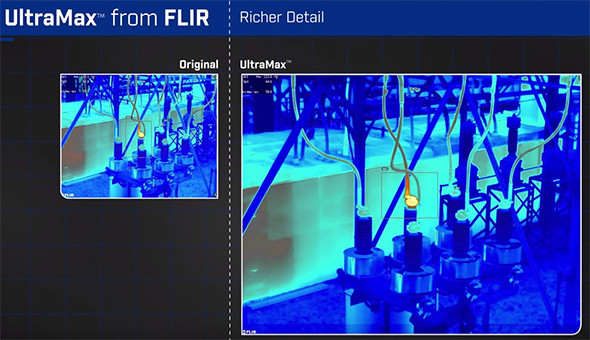 You get 4X the imaging resolution!

Not only that, Flir says you would get greater temperature measurement accuracy as well.

Right now this UltraMax feature is only available on the Flir T1K thermal imaging camera, but hopefully that’ll change and we’ll see this tech on more affordable IR thermal imagers.

Update: UltraMax is available on Flir’s other T-series thermal imaging cameras as well. In a comment, Adabhael said that they were able to have their older T-series imager updated with this feature, for a fee.

It seems to work in a very similar manner to Keysight Technology’s TrueIR thermal imagers. As you hold an UltraMax-capable thermal imager in your hand, and aim it at the target area, the camera will record a stack of 16 images.

No matter how steady your hands are, there will always be small motions and offsets. When you’re holding something, especially a weighty thermal imaging camera, your vibrations will travel to and into the object.

According to the UltraMax product feature video, all of this data is saved in the same file. When you upload the image stack to Flir Tools, it will enhance your image using the additional information.

Thus, split each pixel into 4 sub-pixels, fill those pixels with unique thermal measurement information, and voila – you have greater resolution than what your thermal imaging camera would otherwise be capable of.

Here’s a forward-looking thought. Because the image enhancement is done through Flir Tools, and not in the camera, there is the potential that we will see this on less expensive Flir thermal imaging cameras down the road.

Flir’s MSX thermal imaging enhancement is an in-camera feature, and so maybe the UltraMax resolution enhancement might eventually be built in-camera as well.

The key to being able to capture those multiple images in-camera, and in a very short time. Flir Tools likely takes the 16 frames and runs through some quick calculations to create an ideal simulated image with max “up to” resolution. I’m thinking that it maybe takes all of the captured thermal images to determine a best-guess approximation.

Okay, so I’m thinking it busts each pixel into 4 sub-pixels, with the original data as a starting point. Then, it uses the 16 images to adjust each subpixel with reasonably certain measurements. That makes more sense to me than if the software used some of the frames and discarded some or most of the others.

Regardless of how it works, all that matters is that it does work. What we need next is for someone to reverse-engineer this technology.

You could buy a Flir Lepton 80 x 60 px module for as low as ~$175 and a breakout board for as low as ~$40. Those are the prices at Digikey. Hobbyist experimenters were able to create a functional thermal imaging camera using a Raspberry Pi, a single-board Linux computer that’s available for $30 to $40, depending on the version.

Being able to create a 80 x 60 thermal imaging camera that could deliver 160 x 120 px imagery for $250 or so would be fantastic. It would be even better if the Flir E4 could continue to be user-enhanced such that its unlocked 320 x 240 px sensor could deliver 640 x 480 px imagery. You don’t want to know how much a 640 x 480 px thermal imaging camera costs, although it’s quite a bit less than the $40K the new Flir T1K with UltraMax is selling for.

Flir’s UltraMax tech sounds pretty good on paper, and I’m hoping to see it in action, either in my own E4, or a community-driven project of some kind. Hopefully Flir won’t limit UltraMax technology to their highest-priced cameras.

If you think my understanding of the new Flir UltraMax thermal resolution enhancement feature is wrong, please let me know and explain your views in a comment!

Oh, and watch this promo video. It looks like we finally have an “enhance” button similar to what you see in TV shows and movies. Someone says “enhance” and all of a sudden they can pick out details to resolve a blurry image or video frame.