ToolGuyd > Power Tools > Cordless > Price Drop: Fluke Visual IR Thermometers
If you buy something through our links, ToolGuyd might earn an affiliate commission. 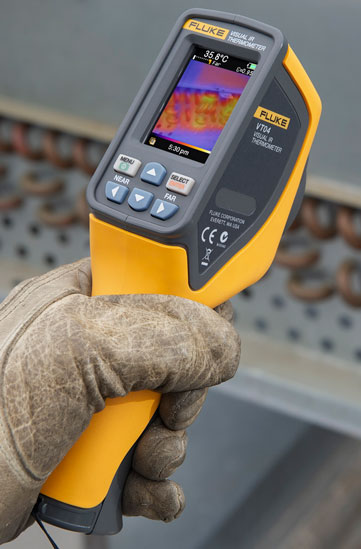 Visual IR thermometers are not quite as versatile as even entry-level thermal imaging cameras. For this reason I was very critical of Fluke’s recent VT04 visual thermometer and its $1200 pricing at launch.

Why buy a visual thermometer when Flir offers their “real” E4 thermal imaging camera for $995. And that’s without taking into account the E4’s ability to be software-modded for a boost in features and resolution.

A few days ago I was on the phone with a very friendly Fluke representative, and I don’t recall how, but we spoke for a moment about the VT04 and its pricing. I was in front of my computer, and was quite shocked to find that Fluke has slashed the prices of their visual IR thermometers.

While Fluke’s VT-series visual infrared thermometers are not quite full-fledged thermal imaging cameras, they are much more capable than single-measurement IR thermometers.

Fluke was right to reduce the pricing on their visual IR thermometers, as this makes their VT’s much more appealing than they were.