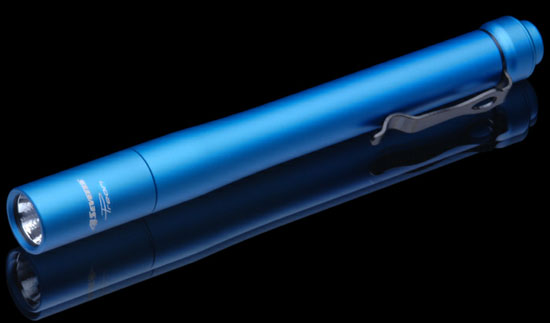 4Sevens, recently rebranded as FourSevens, is a small LED flashlight company that appears to be quite popular with enthusiasts. They’ve been on my radar for a while, and I finally bought a 4Sevens light at the end of 2011. A few hours after receiving my new Quark, I ordered a 2x AAA Preon 2 penlight.

Until now, Streamlight’s Sylus Pro has been my favorite EDC LED penlight. The only days I didn’t carry one was when I exercised my smaller MicroStream.

The Preon 2 is powered by a CREE XP-G R5 LED source, and features a lightly textured reflector and optical-grade glass lens with anti-reflective coatings.

Like other penlights, the Preon 2 throws a bright spot that is surrounded by wider and much lower intensity flood illumination. 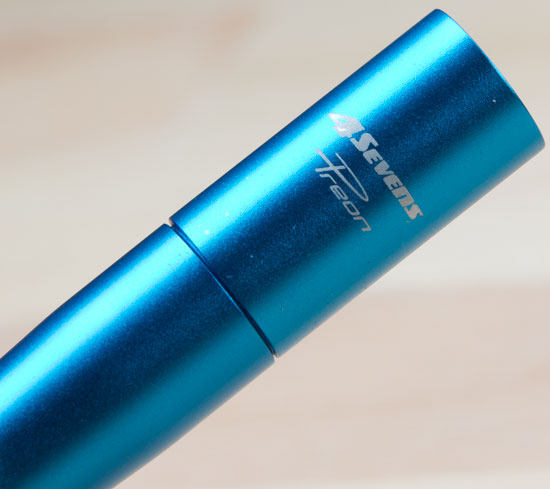 Everyone who I showed the Preon 2 to will agree – the finish on this is absolutely amazing. It’s difficult to capture in a photo, but the surface is smooth yet somewhat dazzling, if you know what I mean. I was caught off-guard by how well the anodizing really looks, and it’s quite durable to boot. 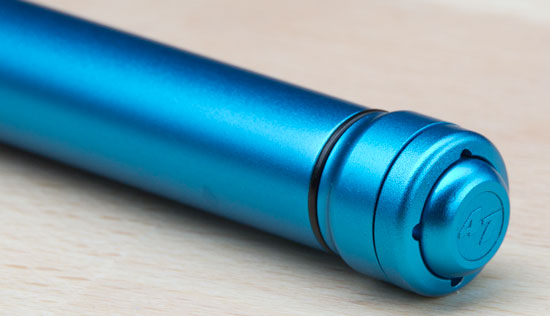 The tailcap construction is complex, as you’ll see in a moment, and is pressed to cycle through the Preon 2’s lighting modes. That black ring you see is the base of the free-rotating pocket clip. What impressed me is that rotating the pocket clip does not scratch, scrape, or damage the flashlight surface finish in any way.

Cycling through the lighting modes can be done via on-off-on-off presses, or via soft-presses once the flashlight is turned on. The settings go from low, medium, high, and then repeat. 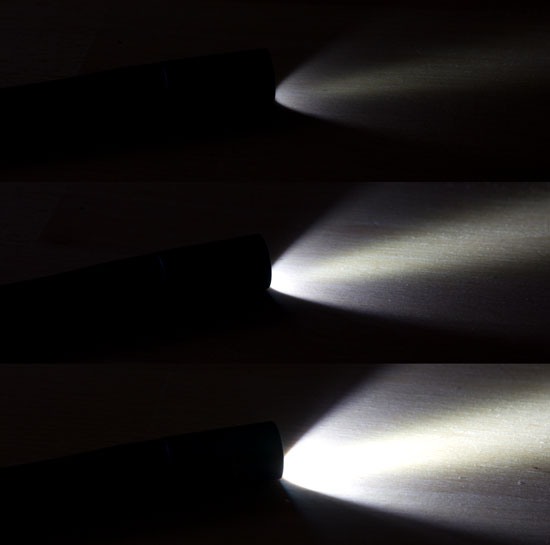 I locked in the camera exposure to show the relative intensities of low, medium, and high power modes. Runtime claims are presumably for the 2x AAA alkaline batteries that come with the flashlight. 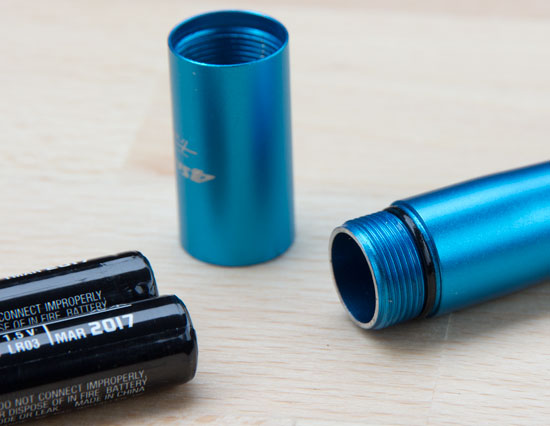 An O-ring keeps the front of the flashlight sealed against dust and the elements. The flashlight is rated to IPX-8 standards, which means it can be completely submerged in water without any ill effects. 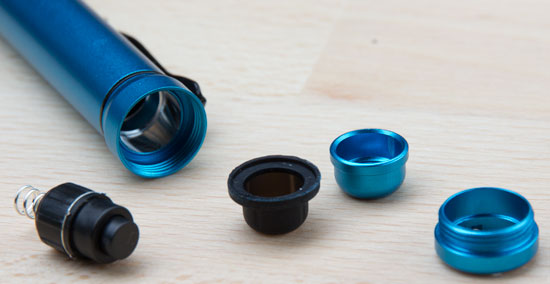 The tailcap assembly consists of a push-button switch, rubber seal, a plastic cap, and then a threaded piece that locks it all in. The threaded piece still attached to the flashlight can be removed as well – and is O-ring sealed – to access the batteries or swap out the pocket clip for a keychain attachment point (not pictured). 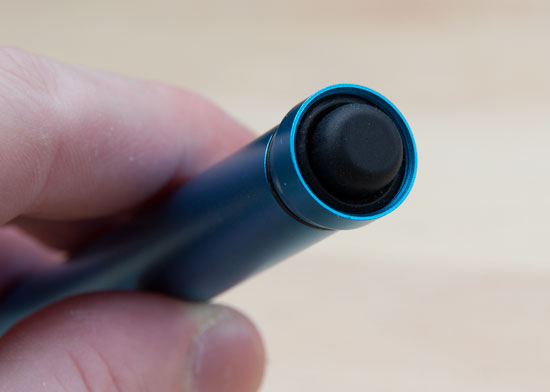 Putting the flashlight back together required carefully reseating the rubber seal.

In addition to the low, medium, and high power outputs, quickly cycling through the full settings twice brings up the “special” outputs: strobe, SOS, beacon (high), and beacon (low). Runtime for these settings are 1.6 hrs, 4.8 hrs, 8 hrs, and 40 hrs, respectively. The strobe and SOS settings are self-explanatory, and the beacon setting delivers 5 quick flashes followed by additional flashes every 10 seconds.

Quite a few of the flashlights I own feature SOS/strobe/signal modes, but I cannot remember ever needing to use them. It’s a good idea to have them available just in case, but they can be a nuisance to cycle-through. For example, the Coast A25 LED flashlight I reviewed a couple of months ago is a very nice model, but it’s annoying to have to cycle past high and strobe modes to get to the low-power setting. The way 4Sevens made such modes accessible via a secret menu is the way it should be done!

The Preon 2 has become my favorite EDC penlight is one of my favorite LED flashlights of any class. It clips to the side of my pocket without trouble, has a useful beam profile, and a set of batteries lasts a nice long time. It starts off in low mode, which is all I need for most applications, but the medium and high power modes are good to have and occasionally come in handy.

Operation is a cinch, and the tailcap push-button switch is easy to press without any difficulty. Some users might prefer a harder switch to avoid accidental operation, but the Preon 2 never turns on by itself in my pocket or bag.

Lastly, the flashlight looks amazing. I try not to factor in aesthetics in how I judge tools and flashlights, but it’s hard to ignore the Preon’s design and surface finish. It’s obvious that 4Sevens puts a lot of effort into the Preon’s appearance, and the result is a flashlight that is as beautiful as it useful.

The only downside to the Preon 2 is its $40-45 price, but for the price you get a bright waterproof LED flashlight with decent runtime and great looks.

The flashlight featured in this review was purchased at its full retail price ($43 via Amazon at the time).