ToolGuyd > Digital Fabrication > Free and Useful Things I Have 3D Printed
If you buy something through our links, ToolGuyd might earn an affiliate commission. 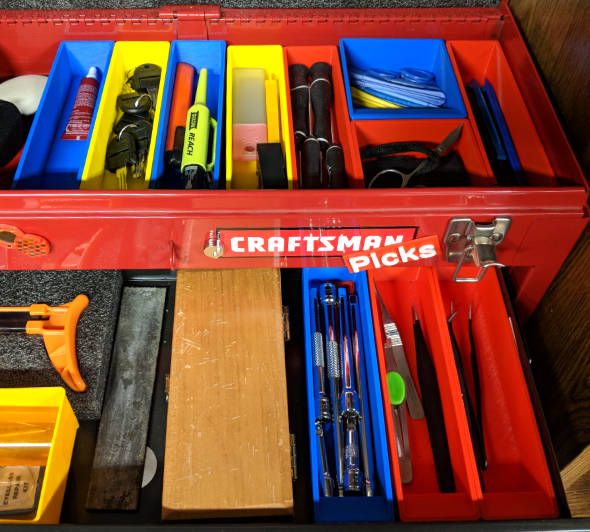 You don’t have to be a designer to make the most of your 3D printer. There are thousands upon thousands of free things you can download and print — and some of them are pretty useful.

I belong and contribute to a site called Thingiverse. It allows users to upload 3D models and download other’s designs for free. There are other places to find free designs online, such as YouMagine, but I believe Thingiverse is the largest, with respect to the number of both members and designs uploaded. They also allow you the ability to modify designs if the creator built the model in a language called openSCAD.

The discussion of what 3D printer to buy, what materials to use, and how to use and maintain it are beyond the scope of this post. What I wanted to show was some of the most useful things I’ve printed. 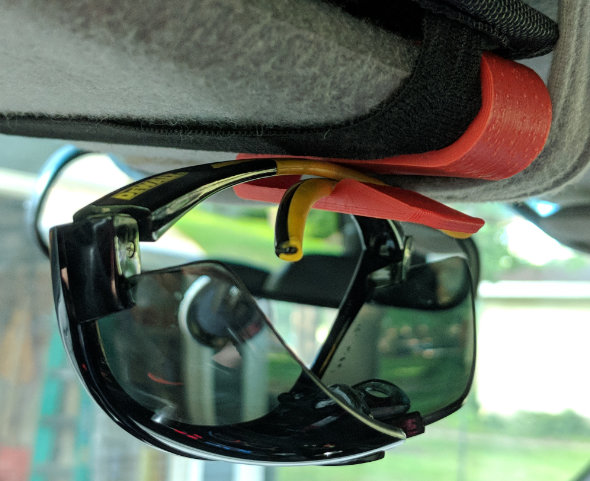 Let’s start up with a simple 3D printed object: a sun/safety glasses holder for your vehicle visor.

I downloaded and printed several different designs until I found this one. Each previous design I tried either didn’t stay on the visor very well or the sunglasses would fall out while I was driving. I didn’t like this design at first either, because it would slip off the visor when I tried removing the sunglasses, even though it held the sunglasses well. Much like the iPhone 4, I discovered that I was using it wrong.

I’ve had this clip in my truck for many months and it has kept my sunglasses securely all that time. I like the simplicity of the design and the fact that it prints very quickly. 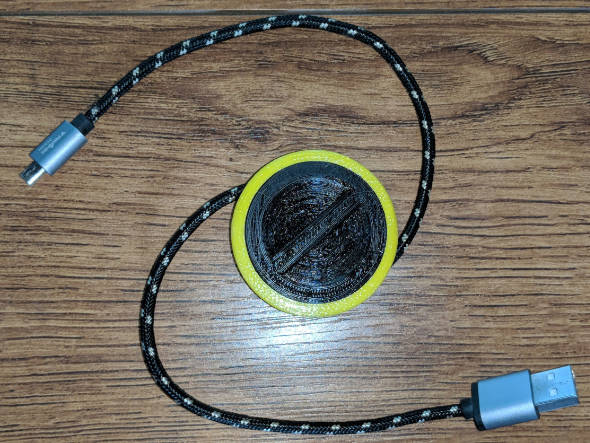 I found this cable reel many months ago and it’s been one of the most useful cord organizers that I’ve printed. It consists of three pieces: the outer shell and a 2-part spool created by screwing two end caps together. 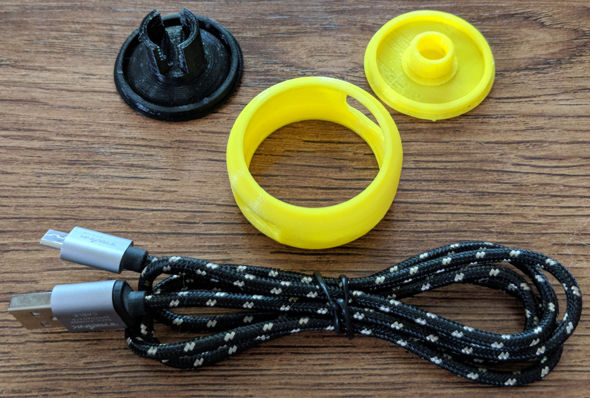 Assembly is easy; you simply slip the cord through the two holes in the outer shell, and then screw the two end caps together inside the shell to form the spool. The slot in one end cap captures the cord in the middle of the spool.

Once assembled, you twist the spool while holding the outer shell stationary. The cord winds up inside the wrapper for storage. When you need the cord you pull on both ends and only unspool what you need. 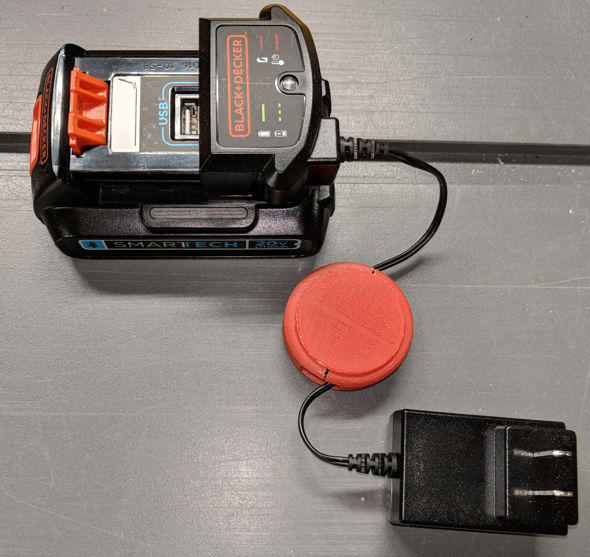 One of the cool things about 3D printing is that you can modify your prints, and if you break it, you can always print another one. I couldn’t slip the transformer of this Black & Decker charger through the outer shell, so I just cut some slots that allowed me to slip the cord into the shell. It made dealing with this charger cord much easier. 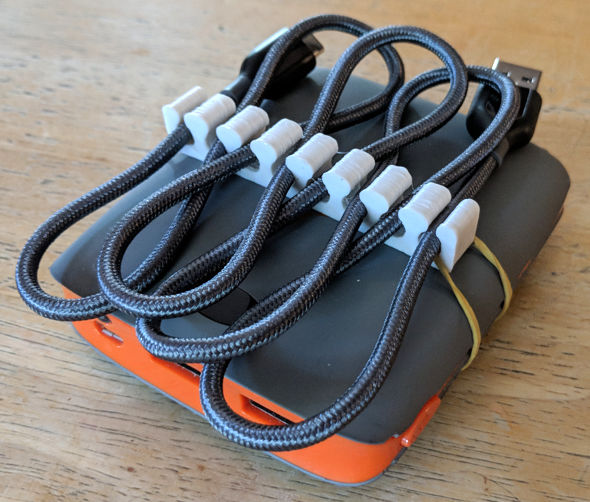 It is a series of “fingers” that hold the USB cable. To attach it to the power source or hard drive, you simply use a rubber band looped around the first and last finger.

The first time I printed this cable mount I used PLA, which is a common plastic used in 3D printing, but I found that the fingers were too stiff, and they wouldn’t bend enough to allow the cable to pass between them. So I tried printing it with flexible filament and it worked well — the fingers have some give and I can easily remove and replace the cable.

I’ve used this power bank with this cable holder at many different media events, and the cable holder has held up well and kept the USB cord tangle free in my pocket. 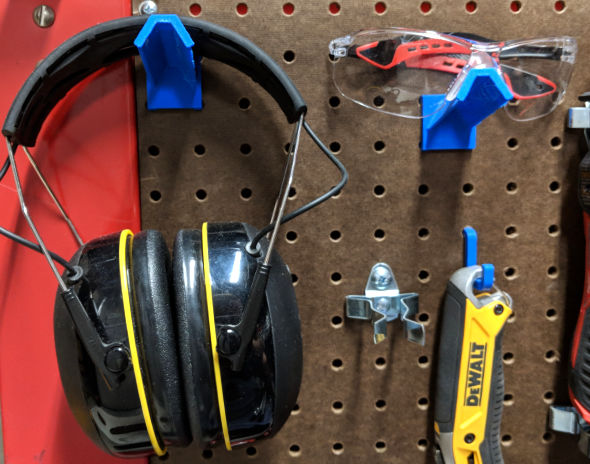 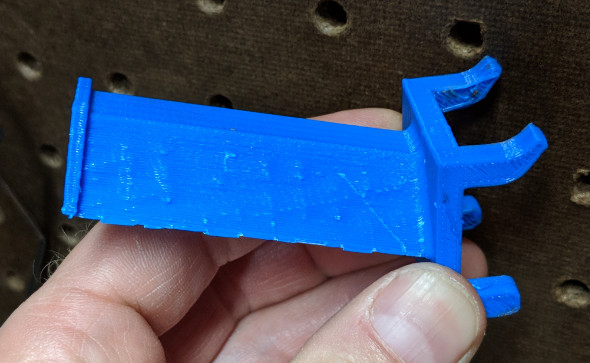 This glasses holder is made for 1/4″ pegboard. It has stubby legs that fit firmly into the pegboard. I’ve found that 3D printed accessories made for 1/8″ pegboard just don’t have tough-enough pins or legs and they tend to snap off — one of the disadvantages of plastic over metal.

The holder is designed to hold glasses by the nose pads, and while it looks like the glasses are just balanced on the holder, it actually holds them quite well. Plus it also makes a pretty handy holder for earmuffs and other hearing protection. 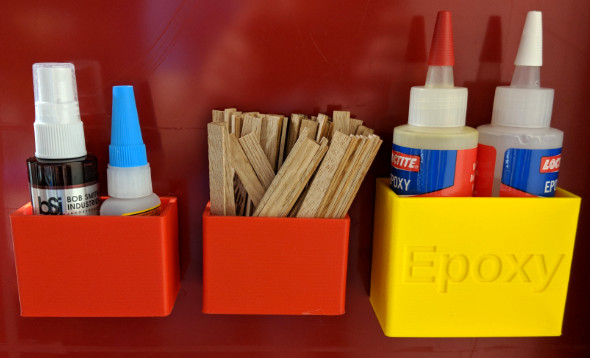 I find these customizable magnetic boxes handy. All you need are a few rare-earth magnets and they’ll stick to most metal surfaces (unless you have a stainless steel fridge). 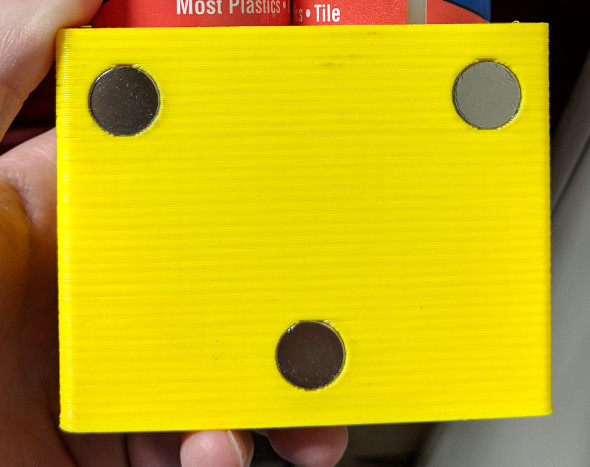 When you open the page for this thing you’ll find a link that says “open in customizer.” For this to work you’ll need to sign into Thingiverse. Once you’re there you’ll see a screen like the one below that allows you to change all the different parameters. 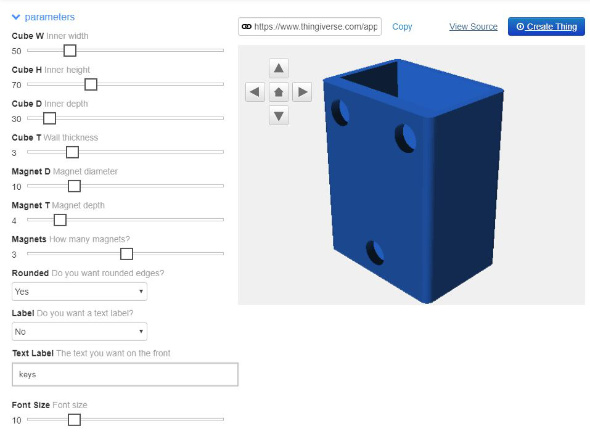 Most of the parameters are pretty self-explanatory and you can see the changes to the model you’ve made in real-time on the right. Once you are done, you click the “Create Thing” button in the upper right. It usually takes a few minutes and you’ll be notified that you can download your customized box file.

I really like these drawer organizing bins, and they are one of the designs that you can customize to fit your needs. For example, I have three different sized boxes, shown above. Besides the square ones, the ones in the top of the toolbox are longer than the ones in the drawers because the drawers are not as deep as the top. That’s the beauty of printing your own boxes, you can use all the space effectively.

Unfortunately, modifying these boxes is a little more advanced, as the author doesn’t have the customizer turned on. Rather, you have to download and install openSCAD and then download the boxes’ .scad file to modify the model. It really isn’t that complex, I can show you below. 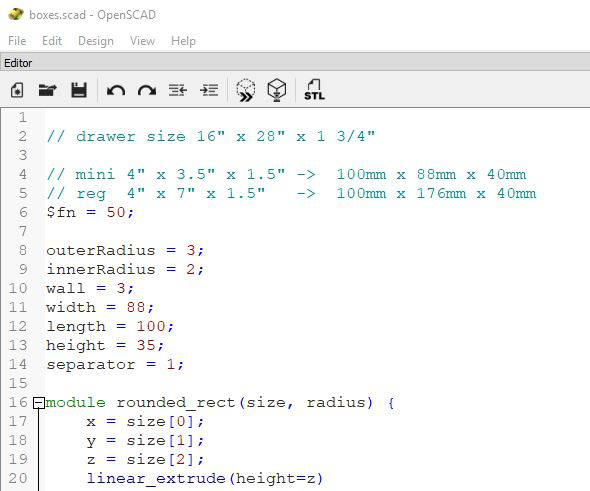 Most models have a bunch of variables that you can modify in the beginning of the file. In this case, the important variables are length, width, and height. Once you change the variables to the size you require, you simply click the render button (the cube with the hourglass), then click the STL button next to it to save the file to a format you can load into your printer. 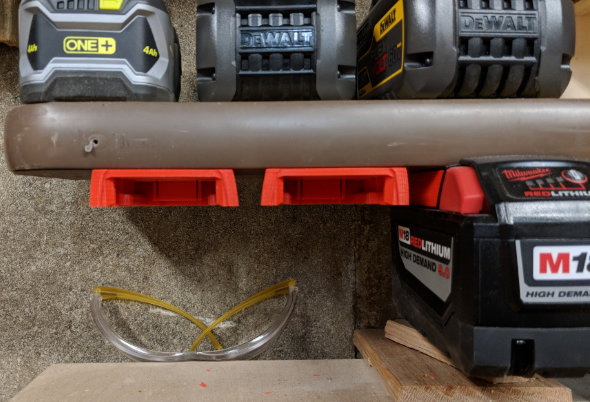 Finally, I wanted to show you these M18 battery covers I found that I repurposed into hangers for the batteries. Sometimes you don’t find exactly what you need and you might not have the skills to model something that will work. 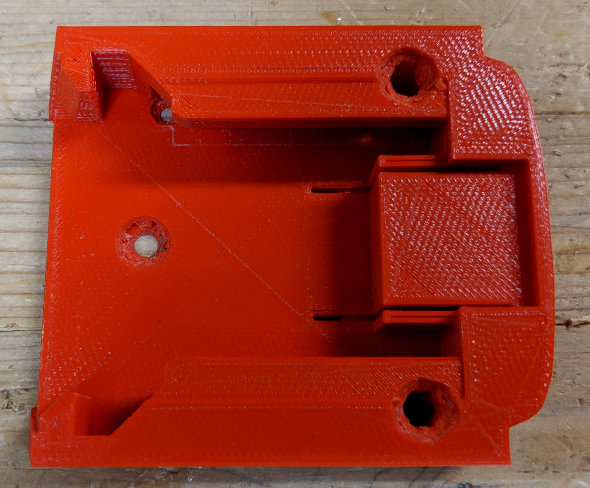 Here, I’ve repurposed a few holes by enlarging them and drilling my own. Then I counter-sunk them so the battery could still slide into the the cover.

3D prints are usually machinable, if you print them with enough infill. I printed this particular model with 50% infill. A lower infill is done to decrease printing time and to reduce the amount of filament used. Inside the counter-sinks, you can see that the internal structure has voids.

Talking about modeling skills, I downloaded and printed several battery covers until I found one that worked well. When I find really good models I will usually look at other things the designer has uploaded. This particular user — Simhopp — has models for other battery brands that I’ve printed, and they all work as well as the Milwaukee design.