ToolGuyd > DealGuyd > Freud Router Kit $130 via Woodcraft
If you buy something through our links, ToolGuyd might earn an affiliate commission. 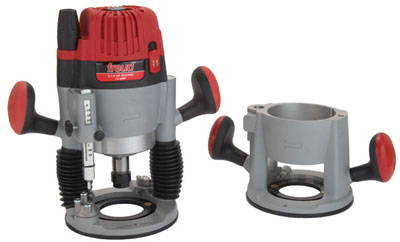 Major Ramifications, from the  GarageJournal forums, informed us that Woodcraft is offering a 2 1/4″ HP Freud router kit with a fixed and a plunge base for $130, shipped. The router comes with the two bases, the motor, 1/4″ and 1/2″ collets, an above-table adjustment knob, and a kit box.

The core components of this set appear to be identical or at least very similar to Freud’s FT1700VCEK fixed-base router, but with the addition of the plunge base. Taunton’s Tool Guide (2008 and 2009 editions) mentions that the runout is a tad high on the FT1700VCEK (0.005″), but they also praise the ease of changing bits, as well as the added convenience of being able to unlock and adjust the height of the motor from above a router table.

The Freud router kit will be priced at $130 via Woodcraft through February 27th, but “supplies are limited,” so you may not want to hesitate too much.  Woodcraft’s free shipping offer, for orders over $75, expires on January 31st. The average retail price of the router kit is $250.

One final comment – it appears that the router combo kit is available at Lowes.com for $100 + $5 shipping. However, there seems to be a bit of ambiguity since the given model number is the same as for the kit, but Lowes’ description only specifically mentions the plunge base.

Buy the Freud Plunge & Fixed Base Router Kit via Woodcraft

Additional References:
Similar Freud Plunge Router via Lowes
Similar Freud Fixed Base Router via Amazon (Customer reviews are mostly positive)
Product Information via Freud Tools (Woodcraft does not mention the exact product number of the kit, but this appears to be it.)

Again, thanks to Major Ramifications for the heads-up!