ToolGuyd > Hand Tools > Electrical Tools > From Outlet and Light Switch Replacement to Box Sizing Questions and More
If you buy something through our links, ToolGuyd might earn an affiliate commission. 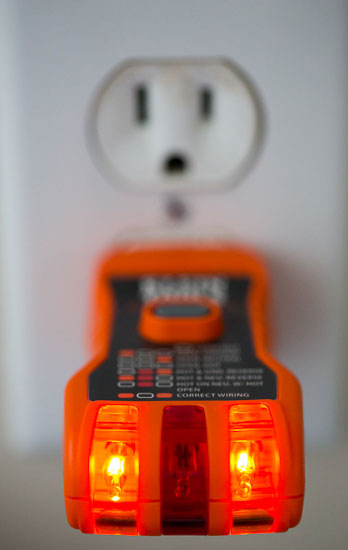 I was able to [finally] get some home electrical work checked off my to-do list. It wasn’t a lot, but a good start – I think. But it brought up some questions, and a bit of anxiety.

The first outlet was a little tricky. I don’t have a lot of experience with residential wiring, but it was the wires’ short working lengths that made things more difficult. Once that first outlet was done, I turned my attention to a troublesome outlet that was giving a “hot and neutral reversed” fault code.

Yup, the hot and neutral wires were indeed reversed, and the outlet was also connected via back-stab. The ground wire was a little corroded in some part maybe, or just dirty.

I bought an Amprobe tester last year, but still like using the Klein receptacle tester I reviewed a while back.

Side Note 1 – I bought a bunch of “unbreakable” cover plates, and they fit my new duplex outlets pretty poorly. They’re larger, but also flexible and deform a little when tightened down. Then again, some of the outlet boxes are a little crooked, exaggerating the effects. I guess I wouldn’t have the problem with “Decora” style outlets, or maybe that would be a different problem.

Then I tackled the outlet that used to be switch-controlled. Here’s where some questions and anxiety arose from.

The Situation: 1 Receptacle, Too Many Wires

There are 3 sets of conductors entering the outlet box. It’s in the middle of a run, and here is what was connected to the previous receptacle:

The outlet had 3 backstab connections and 2 were screwed down. There were 5 wires going to one receptacle. The bridges between top and bottom were NOT broken.

Some Context, if it helps:

This is in the living room. After we bought the house but before we moved in, we had ceiling lights put in. Previously, the light switch controlled this outlet. These are the 2 connections that have given me some anxiety after I cleaned up and turned the power back on.

In the family room, there’s still a switched outlet, in addition to new ceiling lights and another in-wall light switch. Both outlets of the same receptacle are controlled by the existing light switch.

Now, in the Living Room, the outlet is always-on, and the switch controls the ceiling lights.

My question is this: Are there too many conductors in the plastic box? I couldn’t see markings, and might need to check again, but I took some measurements (below). Is it counted as 6 wires (3 hot, 3 neutral), +1 for ground, +1 for the wire nut(s), +2 for the receptacles, for 10 total? The Romex-style wires have white outer sheathing, and so I’m assuming 14 gauge. Plus they’re on a 15A breaker.

Update: I measured the plastic box to have internal dimensions of ~3.25″ tall x 2″ wide x 2.5″ deep. So does that mean a cubic volume of at most 16.25 cubic inches? If so, that does seem to be way too small of a box according to the box sizing charts I’ve seen.

For all I am aware, these are original standard single electrical boxes from 40-50 years ago.

All I did was replace the outlet, with the wiring nearly exactly as it was before.

As for the nearby light switch, this was a new switch installed by a licensed electrician to control the new ceiling lights he installed at the same time. It was a dimmer switch. I replaced it today with a “smart” dimmer switch, more on that another time.

The light switch has:

Oh, There are More Concerns

To start, the wiring from the outlet to the switch does not seem to carry the ground over; I can see it terminated at the end of the sheath right where it comes into the light switch box. I can only assume that the ground from the switch to the lights is brought to another ground connection somewhere, maybe dropped down to one of the wall outlets. That seems feasible.

Also, one of the hot wires, and it looks like it could be the new wiring to the lights, has a tiny crack in the insulation at a bend near where it connects to the switch via wire nut, and I think I can see the copper within. Must I wrap with electrical tape, leave it alone, or cut it and try to work with the super shortened wire?

It’s not something I caused, but now that I noticed it, I figure I should probably act upon it, or at least mention it here. Many of you know a lot more about AC wiring than I do, and I trust you’ll forgive me if anything I’ve asked about has an obvious answer.

After removing the old dimmer switch, I connected the new light switch to the 2 hot and ground wires using the included wire nuts. I wasn’t very confident about the connection, so I checked and double checked it, and it seemed solid. The light switch has thin stranded wires, so I tried my best to wrap them around the wall wiring before tightening the included wire nuts. Twisting with pliers would have obliterated the small stranded wires.

Maybe some Wago Lever Nuts, or more preferably the new slimmer ones, or push-in nuts would have been better. I use those all the time in my DC wiring applications and love their ease of use. What are your thoughts on using these connectors for home/residential wiring in place of wire nuts?

The wires are all somewhat short and stiff, so getting everything back into the electrical boxes required a little pushing. I had to cram things in, not forcibly, because the wires were short to start with.

Is this too many conductors in the light switch box?

Thinking About That Converted Outlet Again

I started out wondering about the light switch box, but am much more concerned about the outlet box.

I’ve looked at building codes, but the answer doesn’t seem obvious to me when I consider a few other things. Surely the electrician who converted the outlet over to always-on (without replacing the outlet??) and added the ceiling lights and switch would have done something differently if the boxes were too small, right?

(Hmm, maybe he didn’t replace the outlet because it would have forced him to bring the box sizing up to code?)

It wasn’t very obvious what the “before” looked like, since I just see the “after.”

Update: The family room switched outlet and switch has minimal wiring, so that’s not much help. The light switch has a ground wire, but it’s not connected and only extends into the box maybe an inch, or two at most. So if anything else ever goes in there, how do I connect to just 1-2″ of ground wire to make an extension?! I would swear I saw a “19” at the back if that switch box, but it might not refer to volume..

Oh, and the copper wire is white underneath the light switch screws. It almost looks painted. If it was painted, would that mean white = both are neutral, meaning that the outlet is switched via neutral instead of hot?? I didn’t pull the outlet out yet, but with the switch off the hot wire triggers my non-contact voltage tester…

I figured that some of you electricians or savvier DIYers might have some ideas or advice for me. I’m primarily worried about the box sizing, but also…

Go Back and Go Long?

Should I go back in, add extensions using wire nuts or other connectors? That would make future changes or replacements easier, but also allow for easier folding of the wires. I couldn’t fold the wires in too easily, given their shortness. It took pushing and screwing the fixtures in to get everything settled the last distance.

With the outlet, I used a receptacle that allows for side wiring (traditional), or back-wiring (not back-stab, but where there’s a plate under the screw that clamps down on the wires). With 2 short hot wires and 3 neutrals, I connected a pair of the hot and neutral each to back-wire clamps, and used the side screw for the last neutral. I guess I could have used a new wire nut to group the neutrals together.

I have a feeling that I will start extending out the outlets I work on in the future. If so, the questions would be 1) how long should the extensions be?, and 2) wire nuts or push-in connectors?

I’m Out of My Comfort Zone

As you probably know, or can certainly tell, I’m the over-thinking type. I worry about everything from proper hook shape to wondering why I can’t fold wires back into electrical boxes with the same ease as they fold out.

In a fabrication or lab equipment where I wire things up from scratch, everything is controlled, and everything is by design. With these outlets and switches, some of the previous work simply confuses me. Having to cut out the back-stab connections is a frustration. But on that last formerly switch-controlled outlet? The 2 hooks I took out were soooo bad. I really hope that wasn’t by the electrician that worked on the ceiling lights and other parts of the house.

I didn’t add any conductors, or anything that acts as new “conductors” to the outlet box or light switch box. But then again, some of the outlets I replaced had back-stab connectors, and one had hot and neutral connections reversed. So I hope I can be forgiven for not completely trusting that things were perfectly to code before I took a peek.

If it’s not up to code, then that would likely mean at least 2 electricians ignored it.

Any advice would be most appreciated!

And once I’m ready to move to the next outlet or switch replacements, here’s what I have to look forward to:

I’m sure hoping that there are no more surprises.

1) Do you think the outlet box is over-capacity? If so, what to do about it?

3) Should I go back in the boxes and add extensions via wire nuts (or push-in connectors)? I’m not so much worried about future changes as I am about stress on the wires or insulation. As mentioned, one of the hot wires in the light switch box shows evidence of bending stress.

4) If I change anything about the switched outlet in the other room, how do I connect to the itty bitty ground? It seems like it would be easier to convert the outlet to always-on, cap the wires, and install a wireless remote wall mount that could control the smart light switch I might add in place of the current dimmer. This would essentially create 3-way switching, with a hard-wired switch at one entryway, and a virtual one at the other.

All I wanted to do was replace some outlets and a light switch, and while I did that, I also created a rabbit hole.

It brings up other questions too. Let’s say I have an outlet behind the TV, in the middle of a run, and so there are 4 conductors, plus 1 for ground, plus 2 for the device, and 1 for wire nuts. So that’s 8, and requiring 16 cubic inches if I’m understanding what I read correctly. Let’s say I want to add an outlet up the wall for the TV to be wall-mounted. Adding 2 more conductors to add a higher-up outlet might take the standard box out of code, unless the lower box is box covered up and the outlets moved for no net change in conductors.

How to Hold Big-Loop Electrician’s Scissors

How Often do Light Switches Fail?