ToolGuyd > Hand Tools > Pliers > Gear Preview: NWS Ergo Combi Pliers and Fantastico Plus Cutter
If you buy something through our links, ToolGuyd might earn an affiliate commission. 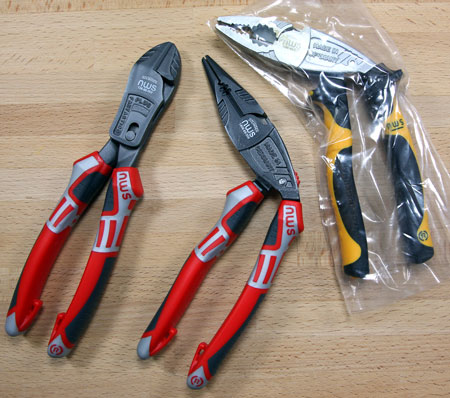 Yesterday I talked a bit out a few new LED flashlights I recently ordered. In the same spirit, here’s a preview about a few NWS pliers I just received. Of course a proper review will be in the works, but I couldn’t wait to share my excitement about these pliers with you.

If you’re not familiar with NWS, don’t worry, it’s not just you. While I may have heard a little about their pliers in passing, I have not really known about the brand until very recently.

NWS pliers are made in Germany and are apparently considered top-notch, with some users claiming that they top even Knipex in terms of quality. One look at NWS’s full line of tools, and I knew I had to try them out.

In the picture above, from left to right are: a heavy duty Fantastico Plus side cutter which can cut hardened piano wire, a Multi-Ergo pistol grip needle nose plier with stripper/cutter/crimper, and an Ergo-Combi pistol grip combination plier.

The Ergo Combi pliers is chrome-finished, and the other two feature NWS’s Titan Finish, which they describe as PTFE plastic coated. (PTFE is commonly known as Teflon.)

Also on the way is a standard combination plier and several screwdrivers. I’m always excited when I purchase new tools to try out, especially if they’re unique or from an unfamiliar brand. I paid about $35 each for the 3 pliers, but from what I can already tell, they’re worth it.