ToolGuyd > Hand Tools > Mechanics' Tools > Gearwrench Has a New “Brand Identity”
If you buy something through our links, ToolGuyd might earn an affiliate commission.

Gearwrench recently sent over a news announcement, introducing their new brand identity. They say that the new identity “embodies the brand’s renewed commitment to customers” and that it “better represents its expanded line of quality tools.”

The new Gearwench brand identity is said to include a new logo, tagline, colors, typography, and product design.

I don’t know what this means, and Gearwrench has not yet gotten back to be on some questions. This is what I asked:

How will this affect Gearwrench tools? For example, the cutters in the image look to be highly finished and polished PivotFroce pliers. Will they cost more? Will the dripped-grip version be discontinued? Will both dipped-grip and dual-molded gripped versions be sold alongside each other.

The tools shown in the New GEARWRENCH Brand Identity press release are concept renderings of tools using the new GEARWRENCH visual brand identity. All GEARWRENCH products will be updated to reflect this new look as soon as possible.

Does this explain the recent Armstrong and Allen factory closures? (Are any Armstrong tools still being produced and sold under that brand?)

The new GEARWRENCH brand identity has no relation to any changes with manufacturing facilities. The changes you are referring to were the result of consolidations to maximize production capacity at Apex Tool Group (ATG) manufacturing locations. ATG has made a strategic decision to exit the Armstrong business; tools are no longer being produced under that brand.

That screwdriver looks new; are there are other new tools that have underwent design or manufacturing updates?

Let’s talk a bit more about what the announcement said.

The new tagline will be Forge Ahead.

The new FORGE AHEAD tagline connotes the strength and power of the forging process combined with the forward-looking vision that has propelled the growth of the brand. “GEARWRENCH has had a reputation for innovation since the beginning,” added Smith. “The new FORGE AHEAD tagline will resonate with users in every market we serve, whether it’s automotive, industrial, commercial, or one of the many other places where you’ll find GEARWRENCH tools at work.”

I don’t really know what the take-away is here, but it does seem like a powerful and appropriate phrase.

They talk a little about what Gearwrench offers:

Since its introduction, the GEARWRENCH brand has grown to include not only wrenches, but a wide assortment of automotive and industrial hand tools, including ratchets and sockets, tool storage, torque wrenches, striking and struck tools, screwdrivers and nut drivers, pliers, and impact sockets. By the end of 2017, there will be over 4,100 different GEARWRENCH products.

Alright, that is an expanded lineup of tools. But will it be expanding further? 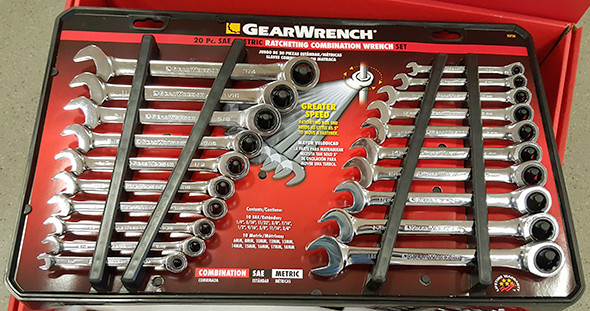 Here’s what the GearWrench logo looked like. It’s right at home on a package of ratcheting wrenches. 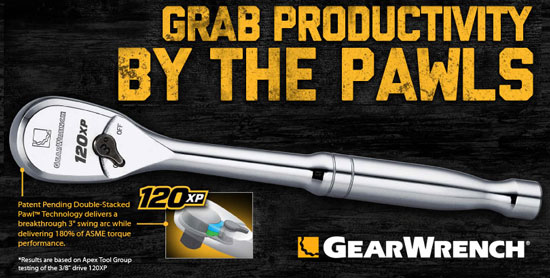 And again on a ratchet promo image. 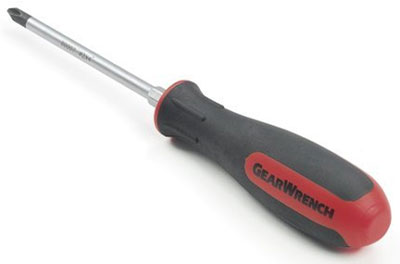 The logo on the older style of screwdrivers is a little bland.

A newer color scheme – read more about those screwdrivers here – is better.

And the green stood out a little more too.

And here’s the new look again. I have to say, the new logo looks amazing. It does look more modern, and the tools like great too.

The diagonal cutters in the image looks somewhat European, with the smooth lines and polished finish. If I didn’t know any better, and you asked me to ID these tools, my first guess would be that they were Beta tools. The dual-molded grip on those cutters and screwdriver look very thoughtfully designed.

On the older style tools, the design looks a little more utilitarian. It’s hard to tell by photos alone, but the new tools – at least those that were pictured in the press release – look to nicely mix form and function.

A substantial marketing investment in the GEARWRENCH brand is being made this year. It includes a partnership with NASCAR and Chip Ganassi Racing and a comprehensive multi‑media advertising campaign.

Hopefully we’ll see some new tools, and not just a push forward for marketing efforts.

I own a number of Gearwrench tools, and have a few test samples of a few others. Generally, I like the brand a lot. Their tools offer good quality and competitive features at reasonable pricing. Some of their tools are a little bland, and it’s hard to find the appealing when placed next to competitive tools.

The announcement didn’t really explain the question that sums it all up:

What does this mean for the tools? What does it mean for us users?

I have no idea. Yet? But the new look is refreshing, and I though it was worth sharing.