ToolGuyd > Hand Tools > Mechanics' Tools > Gearwrench Magnetic Extension Review
If you buy something through our links, ToolGuyd might earn an affiliate commission. 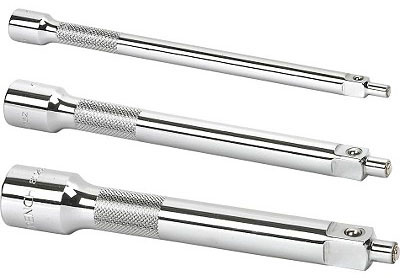 In this review, we put Gearwrench’s 6″ magnetic extensions to the test – read on for a detailed scrutiny, or skip ahead to the verdict.

Close-up of Knurling and Overall Finish

Examining the physical properties of Gearwrench’s 6″ magnetic extensions, we notice that the ball detent, knurling, chrome, fit, feel, and finish are all of the high quality we’ve come to expect from Gearwrench. As for their length, each extension measures approximately 5  5/8″ from one drive end to the other, with a stud protruding by an additional 3/8″ from the male drive end. 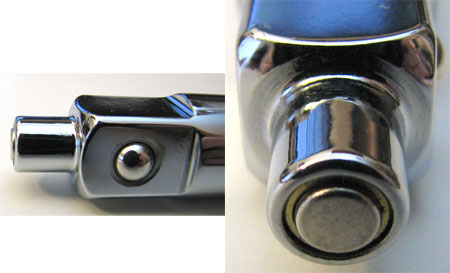 Examining the male-drive side of Gearwrench’s magnetic extensions, you’ll find a protruding stud with a neodymium magnet embedded at the tip. With the extension attached to a shallow socket, the magnetic tip passes through the drive base to connect with an inserted steel fastener, to hold it securely inside the socket.

To demonstrate their holding power, we took the 3/8″ extension, attached a 9/16″ socket, and used a 3/8″ bolt to suspend the extension in midair by its magnetic strength. 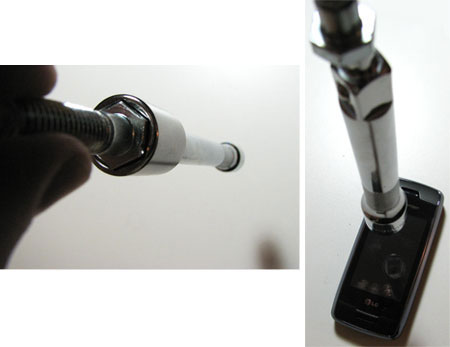 To take the demonstration a bit further, we then took the heavier 1/2″ extension and used a bolt to suspend it a few inches over a cellphone. You should now be as convinced as we are that these magnetic extensions are strong enough to securely hold most reasonably sized fasteners. Although we trust the holding power of these extensions enough to put our personal electronics in harm’s way, please don’t try this at home!

One final observation about the magnets: in our experiences, the use of these extensions did not impart nor induce any noticeable residual magnetic field in any of the fasteners or tools that they were used with. Your experiences may vary, of course.

Now that we have established that Gearwrench’s magnetic extensions have some serious holding power, it is time for the nitty-gritty: how well do these extensions work under realistic conditions? 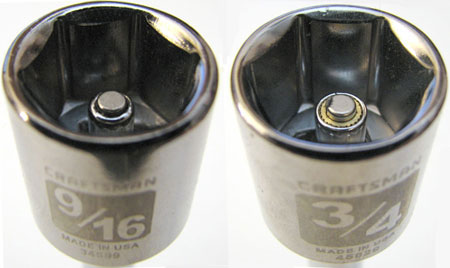 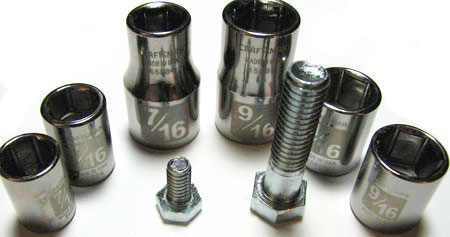 For a demonstration of socket-fastener engagement, we collected 1/4″ and 3/8″ bolts and the corresponding sockets in all three drive sizes. The sockets are Craftsman, and the bolts are zinc-plated, low grade, and sourced from a mass-merchant home improvement center.

The following tests involved attaching the Gearwrench extensions to the appropriate sockets before inserting the corresponding bolts. In the photos of both 1/4″ and 3/8″ bolt tests, only the 1/4″ and 3/8″ drive setups are shown; the complications involving the 1/2″ drive setup will be discussed shortly. 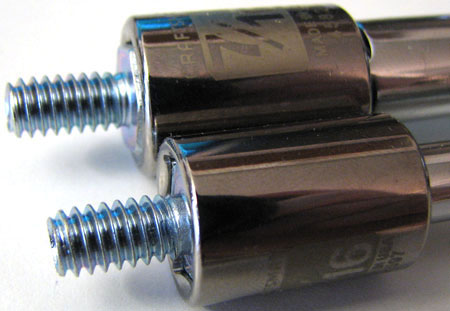 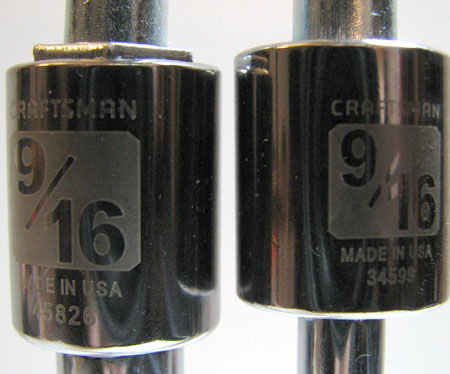 This time, the extensions were attached to 9/16″ sockets into which 3/8″ bolts were inserted. As you can see, there is a slight loss of fastener engagement with respect to the 3/8″ drive socket (left), whereas the bolt head is completely engaged in the 1/4″ drive socket (right).

A slight loss of fastener engagement should not be too much of a concern, except possibly for final tightening or high-torque applications, at which point one can switch to a standard extension or possibly a deep socket. To allay unforeseen setbacks, it might be prudent to anticipate a slight loss of fastener engagement when using these extensions with new or unfamiliar socket and fastener sizes. It is also very important to remember that these extensions were designed to help decrease the time and effort required to initially place and drive fasteners. 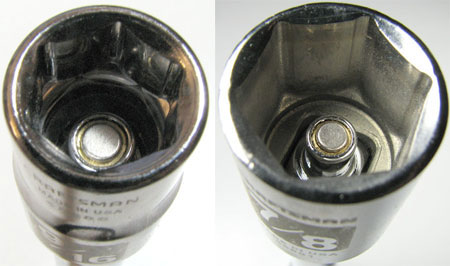 Above, the 1/2″ extension is shown attached to a 9/16″ socket (left), and a 7/8″ socket (right). What you should be able to infer from the first image is that the distance between the drive-end baffle and fastener stop in the socket is greater than 3/8″, and so the magnetic tip cannot contact an inserted bolt. The same observation was made for even smaller sockets, which is why the 1/2″ drive extension failed both aforementioned bolt tests.

Below is another photo of the 1/2″ extension attached to a 9/16″ socket to better emphasize the depth mismatch incompatibility. We are using the term “incompatibility” for any situation where an extension’s magnetic tip cannot reach a fastener. Such conditions result when a socket has an internal barrier greater than 3/8″ in length as shown above, or in the rarer case where a socket’s baffle is narrower than the diameter of the extension’s stud.

Although it may seem serious, this “incompatibility” is actually rather insignificant since 1) it requires an unlikely matchup of drive and socket sizes, and 2) if by chance it does become an issue, there are numerous workarounds that can be employed. One such workaround would be to switch to a smaller drive size, either entirely, or with the use of 1/2″->3/8″ or 3/8″->1/4″ adapters.

As with many of their innovations, Gearwrench designed their new magnetic extensions to shave off some of the time, effort, and frustration associated with a particular task. To be completely honest, we initially questioned the utility of these extensions, but decided to give them a try anyways. Well, it only took a few uses before we discovered just how handy they could be.

Much of our affinity for these extensions did not come from the time that we saved, or the effort that we conserved – for us, it’s mostly about the fasteners that weren’t dropped on the floor, those that didn’t ricochet into unreachable compartments, and those that didn’t bounce off of our heads!

These magnetic extensions won’t be replacing our standard ones – nor were they designed to – but they will most certainly be seeing a lot of use. Although in theory we would be happier if these extensions were universally compatible, our experience with them has been overwhelmingly positive. With that said, we highly recommend Gearwrench’s magnetic extensions.

Finally, thank you to Gearwrench for providing the magnetic extensions at no cost.