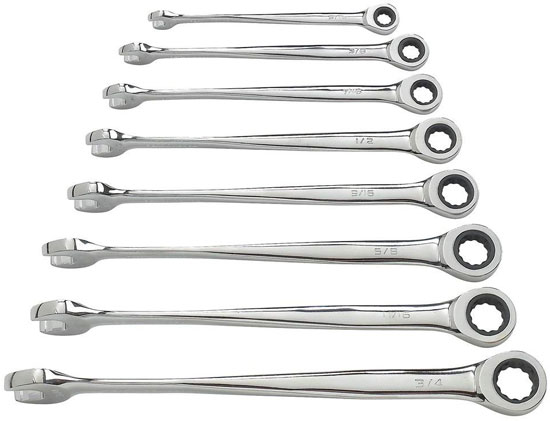 Back in late 2011, there was a Gearwrench sale: 7-piece Gearwrench XL X-Beam ratcheting wrench sets for $24 each. The sale was too good to pass up, so I purchased both inch and metric sets for just under $50.

The X-Beam profile means you are always pressing down on a wide part of the wrench. Gearwrench X-beam wrenches are fantastically comfortable to use, and I have a few non-ratcheting versions that I love using.

The box end ratchets in one direction, which makes it easier to quickly turn fasteners, especially in areas of tight clearance. But there is no reversing switch, so caution should be used when using the ratcheting box ends in areas where you could lock the wrench in place without the ability to remove it.

Gearwrench also offers ratcheting X-Beam wrenches with reversible box ends and flex-head box ends, and I believe those wrenches might have been much better suited for me.

The zero-offset non-reversible ratcheting box end is the part about these wrenches that doesn’t quite mesh with my preferences and usage habits. As mentioned, I really like the twisted X-Beam handle style of these wrenches, and it’s just the ratcheting design of this specific style of wrench that I don’t favor.

In the nearly 3 years since then, I used the wrenches a couple of times. I would say I got my money’s worth, but there are a few reasons why I don’t use them more often.

First, these are long wrenches. Because of this and the wrenches’ X-Beam shapes, they take up too much space in my wrench drawer and so I keep them in a different box. Out of sight, out of mind. My standard combination, X-Beam combination, reversible ratcheting, and flex-end ratcheting wrenches are still kept in my toolbox.

The longer lengths also mean that these wrenches are great for higher torque tasks. However, most of the time my standard-length wrenches work just fine. I suppose in a pinch I could also use a breaker bar, crowfoot wrench, and dead blow hammer.

Now that you know why I only used these wrenches a handful of times in the past 3-1/2 years, here are a few words about the wrenches’ quality, fit and finish.

Quality: Pretty decent. I haven’t run into any issues or failures thus far.

Fit: Sizing is accurate and spot-on. I could whip out the calipers, but there’s no need to. A 1/2″ wrench perfectly fits a 1/2″ fastener, and I haven’t noticed any corner rounding or other types of fastener damage with any of the wrenches.

Finish: Decent, but there are a few cosmetic issues. The chrome plating is mostly good, but there’s some discoloration on the 9/16″ wrench’s open end. I haven’t noticed any peeling, chipping, flaking, or any other major issues. The chrome is very bright and shiny, and is easily wiped clean.

If I could go back in time, I would leave a note to myself to NOT buy these wrenches. They’re well made, work nicely, and are a pleasure to use, but the wrenches’ zero-offset non-reversible ratcheting mechanisms often make the wrenches less useful than other styles of wrenches.

These wrenches don’t satisfy any of my wrenching needs, except for the highest-torque applications. At those times, the twisted wrench geometry makes it so much easier and more comfortable to push down with ungloved hands, and the longer lengths mean less effort is needed than when using shorter wrenches.

I thought these ratcheting wrenches would complement my others, seeing as how they had the X-Beam wrench geometry I was fond of, and so I ignored my known preference against zero-offset non-reversible wrench styles. The non-reversible zero-offset ratcheting box end is just not as convenient to use as I hoped for when I first purchased these sets and gave the style a good try. These are good wrenches, but they’re wrong wrenches for my needs.

Gearwrench’s 7-piece sets aren’t widely available anymore, but there are 8-piece and higher-count sets available through Amazon and other dealers.

Ultimately, I think Gearwrench did a nice job designing and building these wrenches, but I let great pricing compel me into buying wrenches I didn’t really need and couldn’t really use to full advantage. I am convinced I would have been a lot happier with Gearwrench’s reversible or flex-end X-Beam ratcheting ratchets instead of these zero-offset ones.