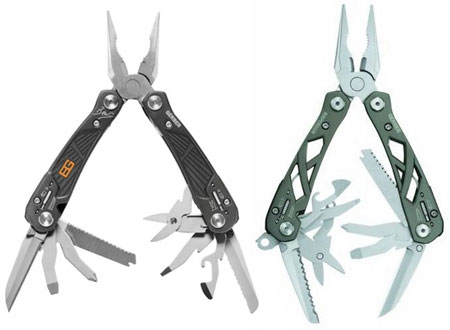 Yesterday we mentioned that Gerber is coming out with a whole slew of new Bear Grylls-branded survival gear. Taking a closer look at some of these offerings, it seems that they might not be that “ultimate” after all.

For at least some of the new tools and knives, it looks like Gerber is just modifying existing products, slapping on Bear Grylls branding, and raising the price tags. For example, take a look at the above comparsion photo between Gerber’s Bear Grylls Ultimate Multi-Tool and their Suspension multi-tool.

With all of the same tool components and the same plier geometry, the only striking difference between the Bear Grylls Ultimate Multi-Tool and the Suspension is the former’s rubber grip and slightly different handle. Oh, and the Bear Gryyls version costs $45 compared to $27 for the Suspension. So that’s an $18/67% premium for slightly different handles and Bear Grylls branding. Unless of course I’m missing something. 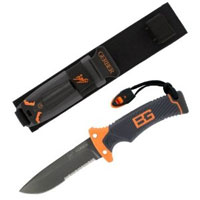 User reviews for this Ultimate Survival Knife are mixed with a quite a few negative comments about the knife’s quality and durability. This knife was released well ahead of the 2010 winter holiday shopping season and appears to have sold exceptionally well.

Compared to Gerber’s other fixed-blade knives, mainly the slightly more expensive LMF II and much cheaper Prodigy, the Bear Grylls Ultimate Survival Knife blade is said to be made from a cheaper steel and has a short tang instead of a full-tang. This information comes from unhappy reviewers, but I couldn’t find any official mention of the type of steel used in the knife to be able to confirm or dismiss these claims.

At this time, I wouldn’t buy any of these Bear Grylls-branded Gerber knives or tools until more info and user reviews are out. My recommendation would be to find the cheaper non-Grylls Gerber or comparably priced but better quality Gerber knives and tools instead. The additional bells (e.g. the Ultimate Knife’s fire starter) and whistles can be purchased for cheap elsewhere..

Edit: Here’s a good review of the Ultimate Survival Knife on the BladeForums.