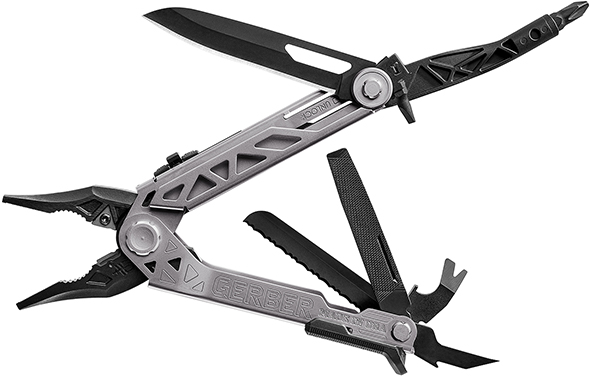 Gerber just announced their new Center-Drive multi-tool, and it looks like they’ve got some Leatherman tools in their sights.

This is what it says on Gerber’s microsite for the new multi-tool:

Second best is nothing to strive for. To trump the multi-tools that preceded it, the Center-Drive had to be real, tough, innovative – and it is. In the inevitable tool to tool showdown, there is no contest.

They also link to a comparison YouTube video, embedded below.

For your interest, here’s a look at some of our past Leatherman multi-tool reviews:

I also reviewed the Gerber Flik multi-tool which, like the Leatherman OHT that came after it, features a one-handed pliers opening mechanism.

That Flik was decent, but I prefer the Leatherman OHT.

Let’s take a look at what gives the Gerber Center-Drive multi-tool the potential to be as great as they make it sound to be.

Some of the specs are a little uncertain. The only Gerber product pages I can find seem to be focusing all their efforts and information on comparing Center-Drive features against the features of a few different Leatherman tools. But, I can see enough to be excited about. 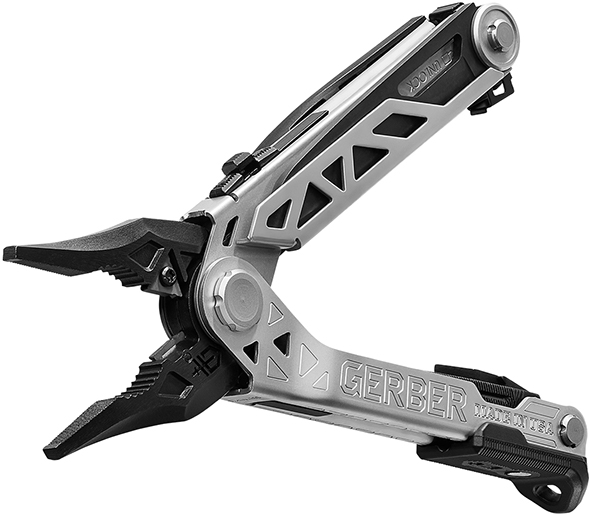 First, look at those pliers! They open not just with one hand, but with one finger. The one-thumb-opening pliers look to deploy and close quickly and easily. Plus, they’re spring-loaded, a feature I’ve really grown to appreciate in multi-tool pliers.

And are those user-replaceable and potentially user-sharpenable wire cutting blades? That’s a very nice feature to have in heavy-use multi-tool pliers.

One cut of too-hard wire, and standard jaws are permanently deformed. Damage these cutter blades, and you should be able to replace them for a small cost.

Yep – Gerber says these are rotatable carbide wire cutters. The rotatable part is nice, and the carbide composition should give them long life.

Here’s the main feature of the Gerber Center-Drive multi-tool, or at least its namesake feature. A centered 1/4″ hex bit screwdriver!

It can use standard screwdriver bits – yay!

And it’s also centered, so you can twist the closed tool as you would any regular screwdriver. If you’ve had to tighten or loosen long screws with a standard off-centered multi-tool screwdriver, you’ll likely appreciate this feature even more so than the standard sized bit holder.

I’m crossing my fingers that it can lock in at a right angle as well, for fastening applications that requite a little more torque.

Gerber says that the screwdriver deploys with the flick of a thumb. Sounds good to me, as digging out a multi-tool screwdriver by its nail nick is no fun, especially with recently trimmed nails.

They boast about the full-size knife being 30% longer than the competition. I think I saw somewhere that the blade is 3.25″ long,

It also has a “reverse thumb support,” designed I guess to give you a more comfortable grip. 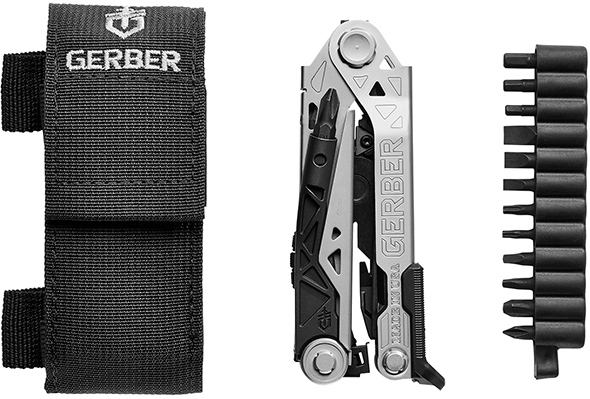 The tool comes standard with a dual-mount sheath and an add-on bit set is optional. As mentioned, you can use the Gerber Center-Drive with standard 1/4″ hex bits.

And the icing on the cake: it’s made in the USA.

Here’s the Overview and Comparison videos:

This looks to be a big step forward for Gerber multi-tool designs. I’m surprised, optimistic, and eager to be impressed.