ToolGuyd > Hand Tools > EDC, Pocket, & Multitools > Gerber Flik Multi-Tool Review
If you buy something through our links, ToolGuyd might earn an affiliate commission.

Every single multi-tool I own or have used in the past are of the type that must first be folded open before the pliers can be used. Both opening and closing the pliers is therefore a two-hand operation no matter how quick.

I spent the past few months testing out a Gerber Flik multi-plier tool as part of my EDC rotation. It didn’t win me over, at least not completely, but I have to say – it proved itself a hardy and capable tool. 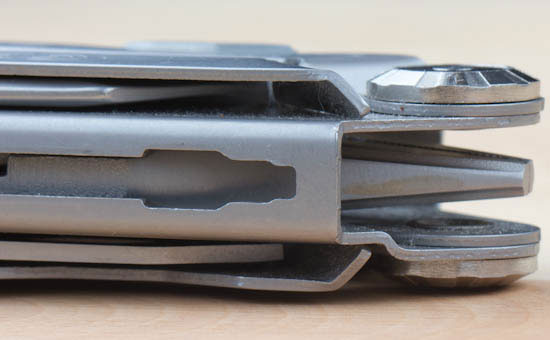 The tool is solid-feeling when closed, and it’s pretty obvious which end the pliers slide out of. 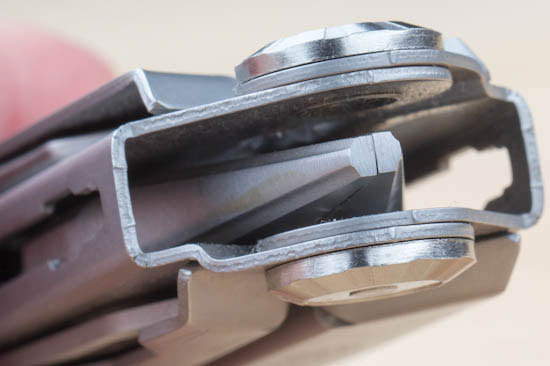 Nothing needed adjustment out of the box – a plus for any mass production knife or multi-tool.

The Flik isn’t too dust-prone, but you’ll probably want to keep it in a sheath seeing as how there’s no belt clip. I misplaced (tossed aside) the nylon sheath it came with and couldn’t find it for photos.

How to Deploy the Pliers

It takes a few minutes to become familiarized with the Flik’s one-handed pliers deployment. You grab the tool, flick it downwards, and the pliers slide right out with their own inertia. 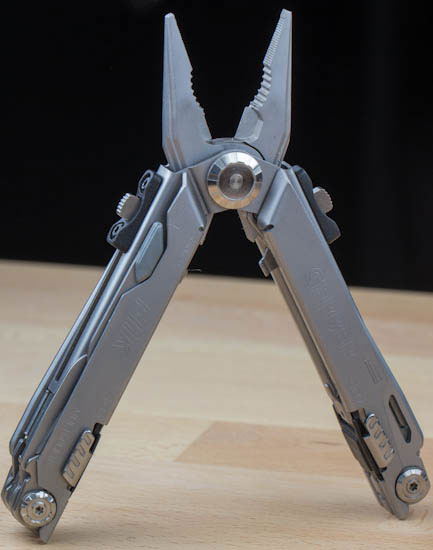 Next, spread the handles all the way to prep the pliers for use.

Close the handles again and the pliers are ready to use.

To return the pliers inside the tool, squeeze the two buttons on the handles and then slide them back. A certain finesse is required, and you will fail to retract the pliers the first few times, but once you figure out the proper sequence of motion you won’t forget it.

Since the Flik features a one-hand sliding pliers mechanism rather than a fold-open design, all tools are outside-accessible. The four primary tools – both knife blades, the saw, and scissors – have little engravings that help you locate and open the tool you need on the first try.

The plain edge blade has a cutting length of about 2-1/4″. It’s straight with a pointed tip that’s great for precision piercing and scoring. It’s an average blade – nothing special but without major faults.

The serrated blade is also average with no major faults. Serrations are ground into one side of the blade, which should facilitate sharpening. I didn’t use the serrated blade enough to where it really needed sharpening or honing.

It is unclear why the saw blade is pointed, but it should come in handy for piercing through foam and drywall. 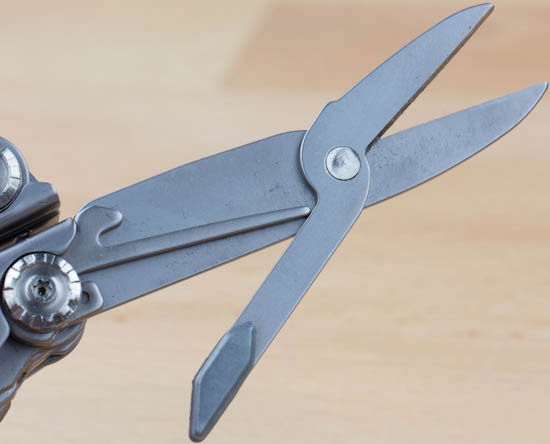 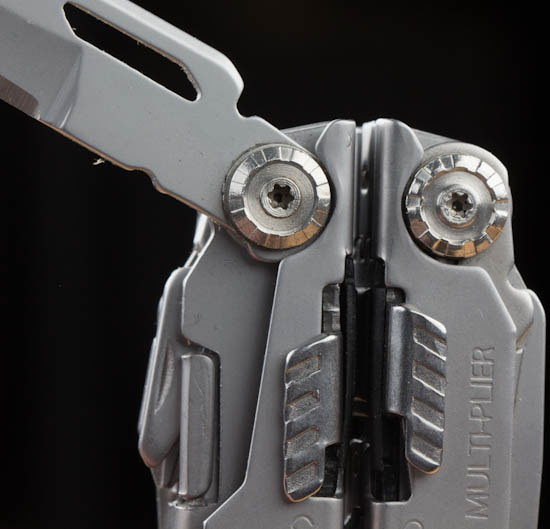 The locking mechanism is not as smooth as I would like, but I cannot see any way to improve upon it. The most important thing is that it securely locks onto open tools and never disengages by accident. 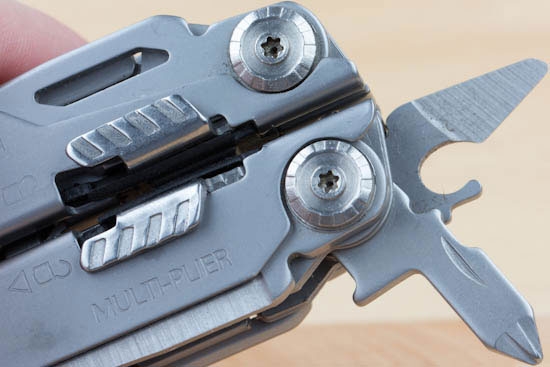 On one side you have a can opener and Phillips-style screwdriver. The screwdriver could not be made any better unless it was more three-dimensional, but that would have to be at the expense of the can opener. 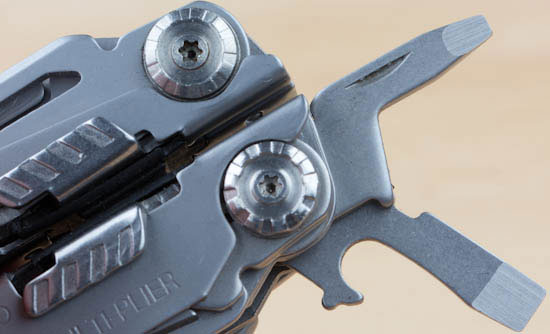 On the other side you have a bottle opener and slotted screwdriver bits. The bits are ground on both sides and are fairly stout. If you have to use them as mini pry bars every now and then, they probably won’t mind, but it might void your warranty. 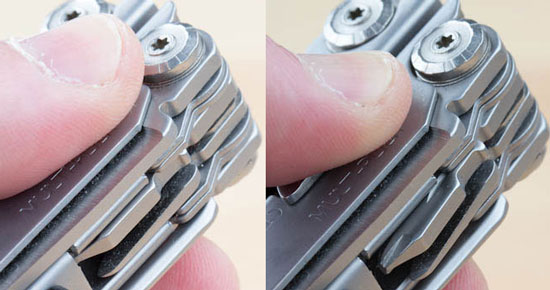 Gerber added in a very subtle open-assist mechanism. The small tools are a bit hard to reach, so Gerber made it so that sliding the locking mechanism pushes the tools outwards a bit, just enough to expose the nail nick.

I never had difficulty pulling out the smaller tools, even after trimming my fingernails. 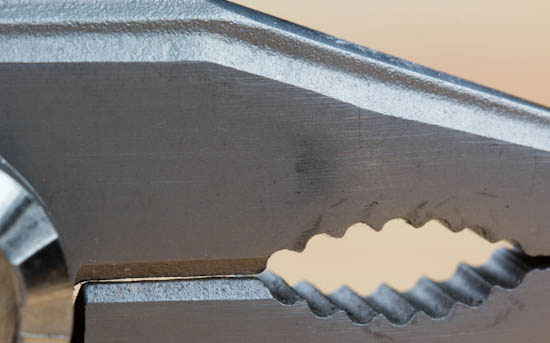 The v-shape wire cutters are nothing to sign praise about, but they work as advertised. These are not for cutting hard wire – that is best done with multi-tools that have user-replacement blades, such as the Leatherman Rebar.

Overall, I was fairly pleased with the Flik pliers. They’re not exceptional, but they’re usable and with a versatile shape. I was pleased with how accurate and fine-toothed the needlenose portion of the pliers are.

The Gerber Flik has a neat one-handed flick-open plier deployment that I have really grown to like. Retracting the pliers is not as easy as deploying them, but there are few re-dos after the initial learning process.

In terms of tools and features, the Flik is about average. There are no gimmicks, but I do wish the knife blades were easier to open one-handed. The blades on Leatherman’s new OHT (one-handed tool) don’t look any easier to open, so it seems to be a design compromise rather than a cost-cutting measure.

Overall, the Flik’s quick pliers deployment won me over. It’s not perfect, but it works reasonably well and leads to more positive than negative feelings. With the Flik you get a versatile assortment of essential and most-used tools and features.

If you want a glamorous all-in-one multi-tool, look elsewhere. If you want a robust tool that won’t let you down, the Flik seems to be up to the task.

Thank you to Gerber for providing the review sample unconditionally. Review samples are typically given away, donated, or retained for benchmark and comparison purposes.