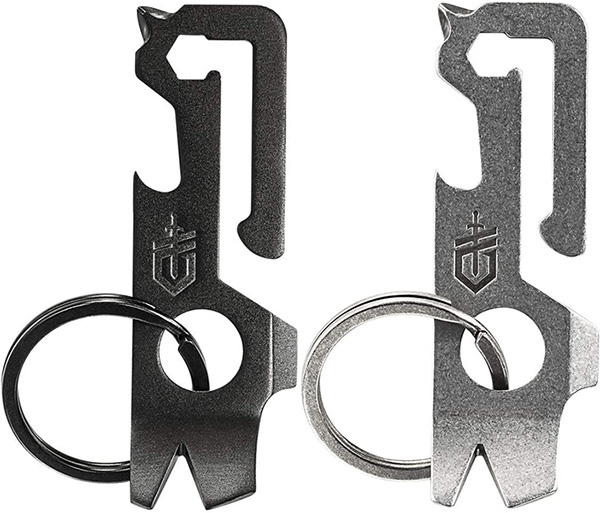 This is the Gerber Mullet, a keychain-sized mini EDC multi-tool, available with a silver stonewashed or black finish.

While not new, the Mullet is new to me.

The Gerber Mullet is said to be travel-friendly, as it doesn’t have a knife blade or scissors. It also sports versatile carry options, and can be clipped to a keychain or belt loop. I suppose you could also potentially remove the keyring and add a lanyard if you were so inclined.

The Mullet has 9 tools and functions:

The 1/4″ hex screwdriver bit wrench is so cleverly placed that I missed it at first.

Gerber describes the Mullet as being able to handle the demands of the work day and also as a post-work wingman.

I do like the motto though – Problems aren’t scheduled in advance, but solutions can be planned for.

Gerber doesn’t explicitly mention the construction, but retailers say the Mullet is made from stainless steel.

I’ve been looking at some other Gerber multi-tools and EDC tools recently, and negative reviews have kept my interest level fairly low. But the Mullet? It looks fairly bulletproof, a design that’s hard to get wrong.

There are some negative user reviews, though, but mostly on carrying discomfort. Someone on Amazon complains that they’re not suited for women’s pants, as the tool pokes their leg and belly when they sit down.

On a keychain, yeah, I can see that it can be a little pokey, but probably no more so than my keys. The belt loop slot looks very convenient, and I like that it would allow the tool to be carried in different locations for either better comfort or convenience.

This looks like something I’d buy to finish up a gift card, or if I needed a “filler” to take advantage of a promo of some kind. I can’t think of anything recently that I would have used it for, but I’d bet that I’d find lots of uses for it if it were at my side.\

Is there any reason not to buy something like this? It’s looking very versatile to me, and for $10 shipped (via Amazon or slightly less at BladeHQ with a higher free shipping threshold), it’s not a big risk.

Years ago I bought a one-piece multi-tool and it was great. Then another brand bought the company and came out with a cheaper version that felt as cheaply as it was priced. With the Gerber Mullet, it’s inexpensive and looks to be relatively simple to make. As long as there are no sharp edges where you don’t want them, it looks like a low-risk acquisition.

At this time, I’m trying to think of a reason not to buy it, but am coming up short. Thoughts?