ToolGuyd > Hand Tools > Precision Tools > The Giaco Whatever Screwdriver YOU DON’T NEED
If you buy something through our links, ToolGuyd might earn an affiliate commission. 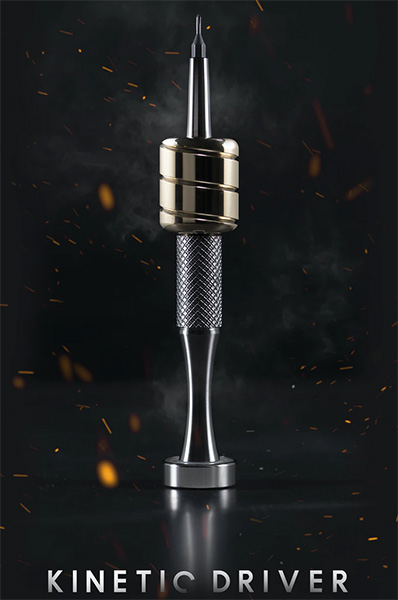 Giaco Whatever, a maker and YouTuber, has come out with a new Kickstarter for his Kinetic Screwdriver.

I’m going to tell you right away – this is the first Kickstarter product I have ever backed, and for it’s a tool that I really don’t need.

A lot of Kickstarter tools and products these days aim to convince you why their doodad is a game-changing problem-solver, and some of them are.

But here, Giaco emphasizes that you don’t need his Kinetic Driver.

I backed the project because the screwdriver looks neat and because Giaco says this will be the only opportunity to get one. It’s kind of like Woodpeckers’ One Time Tool designs, where it’s now or never.

Since Giaco successfully delivered on their “Maker Knife” campaign, that and his reputation has me feeling comfortable that my pledge will result in an actual product being delivered. 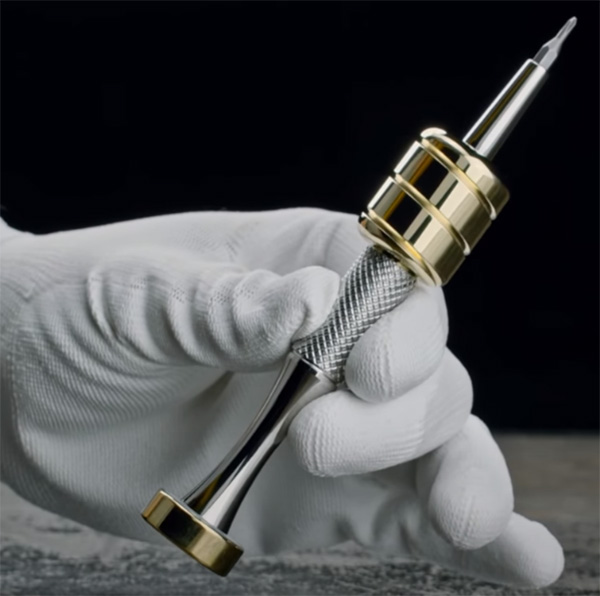 With all that out of the way, what exactly are we looking at here?

Basically, this is a precision screwdriver bit driver.

There’s a ball bearing end cap, which allows for smooth and effortless finger-twirling of the screwdriver. But, the biggest feature is the brass cylinder located close to the bit holder. This creates a very low center of gravity and a “flywheel effect” where you can quickly spin small fasteners as you install or remove them.

The ball bearing end cap gives you speed. The brass cylinder gives you mass. The low center of gravity gives you stability.

The effect should be quickly-turned fasteners.

With traditional precision screwdrivers, there’s too much friction and too little mass to gain momentum.

Here’s Giaco’s Kinetic Screwdriver summed up in one image:

I suppose you could think of this as a tall spinning top with a screwdriver bit holder at the bottom.

Giaco’s marketing angle repeats but you don’t need that as he describes the screwdriver’s features. He’s perfectly right.

This isn’t a must-have tool. Maybe it will provide some usage advantages, and there could be downsides as well.

I worked with small fasteners over the weekend, and the kind where I just had to deal with how slow the process was. The fasteners were too small for use with cordless power tools, and there wasn’t enough friction where a ratcheting screwdriver could have helped with anything. I am very confident that this Kinetic Screwdriver would have saved me some time and effort.

I probably wouldn’t have purchased one if not for ToolGuyd, though. I find the design curious, and wonder how well it actually works. I’ll let you know in a few months, after the Kickstarter screwdrivers are made and delivered.

There’s nothing wrong with tools being fun to use, or designed to inspire their users.

The way I see it, Giaco designed the screwdriver as a fun tool for himself, and is making more for the rest of us to enjoy.

Not to mince words, this is a screwdriver for folks who have money to burn on non-essential tools. As mentioned, if not for ToolGuyd’s encouraging me to explore new and novel tools, I’d probably have more tool needs to put the same money towards.

To me, this is for makers and hobbyists who want a fun connection to their work, or have lots of small low-torque fasteners to turn. Or, if you’re a tool reviewer compelled to explore new tools with a small budget dedicated to “interesting but non-essential” tool sample purchases.

This is a pricey screwdriver with an almost toy-like top or fidget-spinner-type appeal.

What I find appealing about the design is that it seems to aim for a 50:50 form-to-function ratio.

It looks good, but it also looks like a good tool to use as well.

I couldn’t pass it up – I need to check this out.

Each screwdriver comes with a kinetic driver, 24x precision screwdriver bits, and an organizer case.

You can choose between a brass and stainless steel bearing ring.

At this time, the Kinetic Driver will be made in Italy.

It Costs HOW MUCH? Alternatives

Here are some lower priced alternatives: 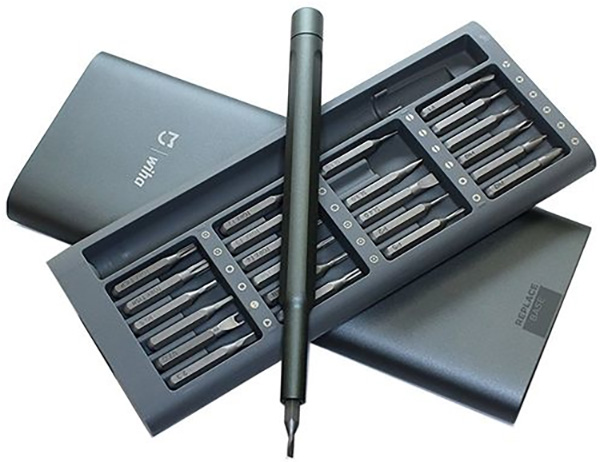 This Xiaomi precision screwdriver set is made by Wiha and is priced at $25-30. 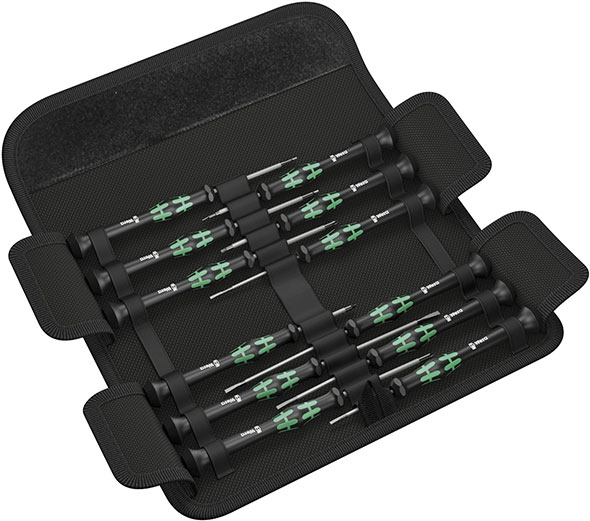 This Wera Kraftform Micro screwdriver set is a good buy with stellar reviews. I own quite a few and think they’re fantastic. 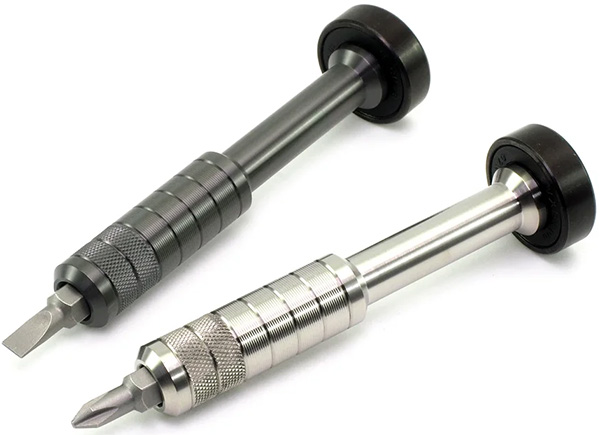 If you want a premium screwdriver that sports a more traditional design, Scout Leather makes a small 1/4″ hex bit screwdriver with spinning end cap. The titanium model (right) is priced at $85. Copper, brass, and zirconium (left) models are also available.