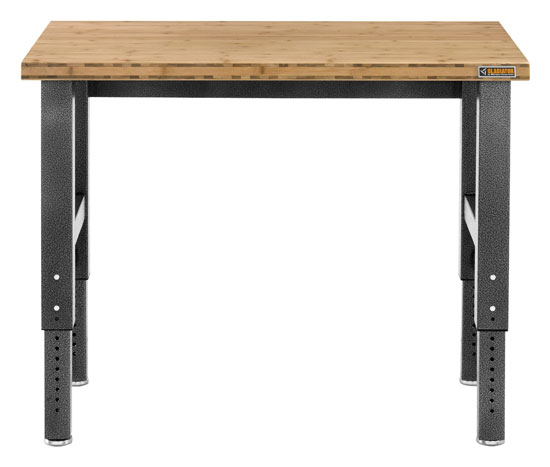 A reader wrote in with some questions and big concerns about Gladiator workbench quality based on some user reviews they found.

Zach (thank you for writing in!) said the following:

I went shopping for retail workbench tops today, first at my local Home Depot, then online, and I noticed something interesting:

Gladiator no longer gives any details about what their workbench tops are made from! I guess their brand is strong enough that they feel they can simply say “hardwood”, and people will trust the quality. Giving them the benefit of the doubt, this allows them to experiment with different materials (acacia, etc.), without complicating their supply chain or having to update their published specifications, but it also gives them significant leeway to quietly cut costs.

One reviewer on their site is accusing them of doing exactly this (screenshot below). He says that his top arrived warped, and, rather shockingly, that they’re using a hardwood veneer.

The imported “hardwood” workbenches aren’t anything new, and I’m not aware of any recent changes, and guess that either the user’s review is representative of lower quality that is cause for concern, or they were unlucky and experienced random defects that can plague any brand.

Here’s what I know, or rather I knew:

The made-in-China workbench uses metric hardware, and despite the instructions being the same, there was some washer/spacer placement confusion that remained unresolved.

Personally, I found the imported version easier to assemble.

The final function of the USA-made and imported workbenches were similar, and although there were distinct differences in the finish of the legs, not to mention the wood tops, they appeared comparably well-made. That was also a few years ago.

I’ve had some problems with the Gladiator workbenches. One of my bamboo tops developed a crack and delaminated in one area. The other developed a damaged/defective foot weld. One of those bamboo-topped workbenches doesn’t have the backplate fully secure either, as one of the fastener heads sheered off during assembly and I haven’t used an extractor or replaced the fastener yet.

I also had problem with a mobile workbench sample that I would have sent back if it were a purchase, where the foot weld, for the threaded stem casters, is crooked and leads to binding when the bench is moved and the caster tries to swivel. But, that could have been a fluke incident, although it’s one I hadn’t forgotten about yet.

My understanding at the time was that Gladiator’s Premier series adjustable workbenches were USA-made, with your choice of maple or bamboo tops, and the “hardwood” workbenches were imported. If there was a special retailer promo, it was usually on the imported version.

I can’t verify it, but I have the notion that Gladiator’s “hardwood” workbench top was made of rubberwood or similar, apparently a mid-density hardwood. They’ve used rubberwood on their “starter series” workbenches in the past. Without knowing the species, we could only guess. I could only tell you it didn’t look like maple, beech, or oak.

Looking on Gladiator’s website right now, I only see “hardwood” adjustable-height workbenches in 4′, 6′, and 8′ sizes, and with dark grey or white frame colors.

The absence of bamboo and maple options does suggest that the USA-models are gone and the imported models are the only ones you can buy right now.

When I first ordered Gladiator workbenches online, they arrived in terrible condition from Amazon and I had them returned. I then ordered directly from Gladiator and if my memory serves correctly they were truck-delivered and the drivers brought them in for me.

Where can you buy Gladiator workbenches these days? Sears used to be a big Gladiator partner, and they’re hardly around anymore. Home Depot might stock some online SKUs, but in-store they’re understandingly much more interested in selling their Husky-branded products.

Zack provided a copy of a user review he read that complained about Gladiator’s worktop being veneered hardwood. I don’t know how representative that might be of Gladiator’s entire line of workbenches. The product photos show a butcher block-like worktop, and that’s what I received in the past. It’s possible that the user received a bad worktop or one with flaws that the manufacturer tried to salvage and still use.

So, I guess this is B, B+ performance as a brand? I’d love if a Toolguyd reviewer could get one of these new “hardwood…just hardwood” tabletops and do an in-depth comparison to their old, highly-reviewed maple tops.

Incidentally, Grizzly sells a competitively priced “hard maple” tabletop, and even quotes the species of maple. If I could get it without the $100 freight charge, I’d go that route in a second (does anyone in the northeast carry these in a retail context?). Edsal also sells a maple tabletop, but doesn’t say whether it’s “hard” maple or not, and the difference is meaningful, hard maple is about 50% more dent resistant, based on the Janka hardness scale. I’ve reached out to Edsal asking if they can specify.

Both Grizzly and Edsal often have solid recommendations. There are other options too, such as buying a set of industrial workbench legs, or building heavy duty mlegs via DIY methods, and buying a quality butcher block-style maple worktop. That’s a pricier approach, though, but it does give more control over the final setup, such as if you want a thicker top or specific type of work surface.

I don’t think Gladiator is experimenting with different hardwoods, it’s just that “hardwood” is a good catch-all and descriptive enough. I assumed that “hardwood” was more consumer-friendly than “rubberwood,” which is a hardwood, but doesn’t sound like it to anyone who hasn’t looked it up on Wikipedia yet.

Gladiator still describes their workbenches as being made from solid hardwood, and the tops definitely still look to feature butcher block-like laminations.

Speaking personally, as someone who has had good and bad experiences with purchased Gladiator products and no-cost review samples, I would be hesitant to consider Gladiator favorably against like-priced competitors, but would definitely still be open to shorting-list them if they or a retailer offered much lower pricing.

Their quality has been great in the past, and although there are some complaints, most recent user reviews seem to be positive.

Any brand can have quality fluctuations or suffer from defective components.

I gave away two of the workbenches last year, but still have two in-use.

I can’t say that the USA-made and imported workbenches are indistinguishable. The imported one was easier to assemble (despite some confusion over hardware differences), and the final appearances were similar. The hammertone metal finish was different in appearance but not quality, and the wood finish was smoother on both sides of the imported version.

I would have purchased that imported workbench, at fair pricing.

Looking online, the “hardwood” version is selling for more than I paid for my USA-made bamboo workbenches. My two benches came out to be $328 each, including freight shipping ($75 for the order).

Maybe the USA version became too expensive to produce. Maybe the quality of the imported version was so close that it became unnecessary to maintain two product lines.

I can’t tell you much about the current workbench offerings or the context around them. It is possible that the quality went down, but unfortunately there’s no way to know without further reports or user reviews.

I moved away from Gladiator workbenches, not because I wasn’t happy with the quality, but my needs changed over time. I don’t know if they would be my automatic go-to these days, but I also don’t think I would dismiss them based on one review of a warped and defective worktop.

Have you had had any recent experiences with Gladiator workbenches?

Reader Question: Best Pliers? What About Your Favorites?