ToolGuyd > Adhesives, Sealants, & Lubes > Gorilla Tape To-Go is a Smaller and More Portable Roll of Super-Duty Duct Tape
If you buy something through our links, ToolGuyd might earn an affiliate commission. 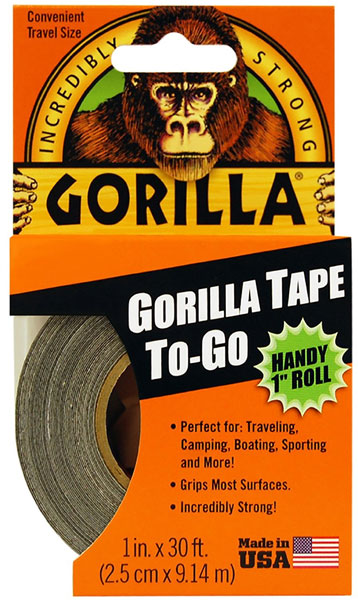 Gorilla Tape, for those of you not quite familiar with the brand, makes some really tough and sticky duct tape. It’s great stuff, except for the initial outgassing smell of the adhesive, that works far better than duct tape in heavier duty applications. Gorilla Tape is rugged, weather-resistant, and holds up against temperature extremes and UV damage. Its tough adhesive makes it easier to stick to rough or uneven surfaces, and also makes it a lot harder to remove.

But, as far as I’ve seen, Gorilla Tape is only available in gigantic rolls. It’s tough to fit a full-sized roll of Gorilla Tape into a toolbox, and even harder to pack it into a smaller tool bag or portable tool kit.

Gorilla Tape To-Go is a smaller 1-inch roll with 30ft of tape. 30 feet instead of 35 yards is a lot more manageable. This tape isn’t exactly teeny-tiny, but it’s much more portable and easier to stow into a tool bag. Or you can wrap a smaller core with a short length of tape for emergency use. It’s easier to unwind a 1-inch strip of tape than a 1.88″ length.

It’s worth pointing out that Gorilla Tape To-Go looks a lot like electrical tape. On the back of the package, it specifically reminds users to not use it in place of electrical tape.

How Milwaukee Hole Saws are Made