ToolGuyd > Made in USA > Hands On: Woodpeckers X-Mat Assembly System
If you buy something through our links, ToolGuyd might earn an affiliate commission. 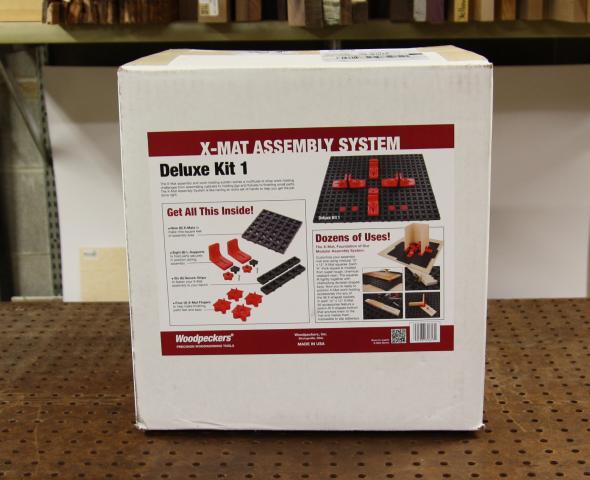 Back in June, I previewed Woodpeckers X-Mat Assembly System. Thanks to the folks at Carbide Processors, I was able to get my hands on the X-Mat Deluxe Kit 1, which comes with 9 X-Mats, 8 L-supports, 6 secure strips, and 4 fingers.

You should check out my X-Mat preview for deeper discussion, but to sum it up, the X-mat Assembly System consists of modular base mats and attachments for creating custom assembly jigs.

The Woodpeckers X-Mat system is built around 1′ x 1′ mats that feature a grid of X-shaped sockets. There are various X-Mat accessories, with X-shaped plugs on the bottom, that insert straight into the X-Mats. The mats can be arranged in a variety of configurations and lock together with dovetail keys. 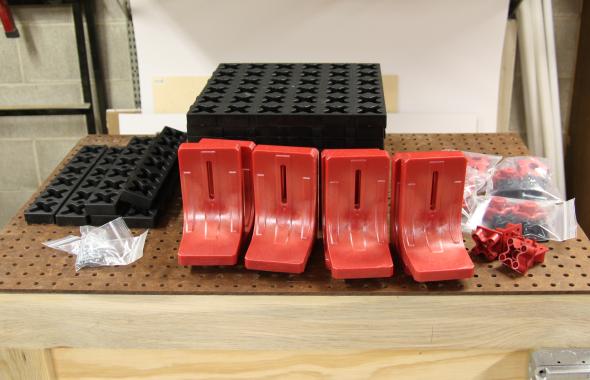 There are also special 2″ by 12″ “secure” strips which also lock into these same keys. These secure strips have holes so you can mount the entire X-Mat System onto your workbench.

You’re probably asking yourself, “in what situations would the X-Mat System be useful?” That’s a really good question. In fact, when I first previewed the X-Mat System, I thought it was comparable to Rockler’s T-Track table. I’m not sure if it was my misunderstanding of Woodpeckers’ webpage, or a lack of distinction between assembly and clamping in the description and pictures on said page, but it’s completely different.

Related: Make Your Own T-Track Table!

To further clarify the difference between a clamping system and an assembly system, let’s give an example: I would use a clamping system to hold face frame together while I was driving pocket screws. Then I might use an assembly system to support and align the rest of the box and face frame while I glued them together. Then I could either use a nail gun or clamps to hold the box together while the glue dried. 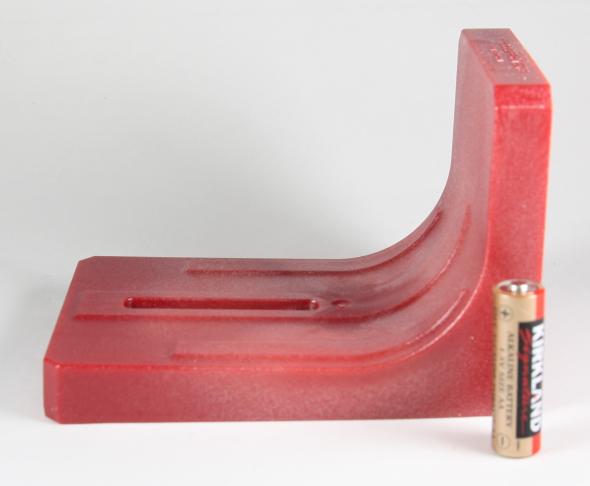 When I opened the box and started unpacking the contents, I was surprised at how large the L-supports were. Woodpeckers says the supports are  3-1/2″ wide, 5” long and 4” tall and you can see the relative size in the photos, but when you hold them in your hand they seem much larger. 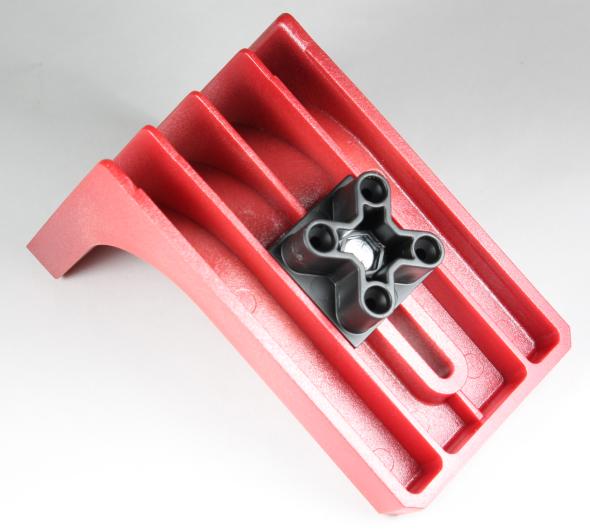 The X-Mats fit together solidly. The dovetails in the sides of the mat lock the X-Mats together so the entire configuration of X-Mat squares is, for all practical purposes, one piece. The X-Mat squares are molded from plastic, and have a textured surface. If you flip one of the squares over you can see you can see it is pretty much hollow except for the support ribbing. This ribbing is enough to make the individual squares pretty rigid. 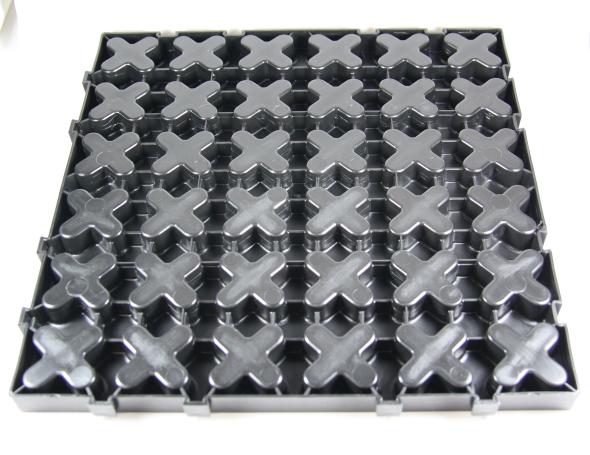 While Woodpeckers claims the X-shaped holes and plugs have a “piston” fit, this doesn’t mean there isn’t any play. In fact I was surprised at how much play there was when I plugged in an L-Support. In the next section I’ll show you just how much a support can move.

My mother gave me an oak buffet that had been in our family for years. It was taking up too much space in her house and we had the room to give the piece a nice home. The buffet needed some repairs though. For instance, the doors didn’t close correctly.

I removed the doors and discovered the hinges on one of the doors had been replaced with the wrong type. Consequently, from years of being forced closed, the core of the door had split between the veneers. 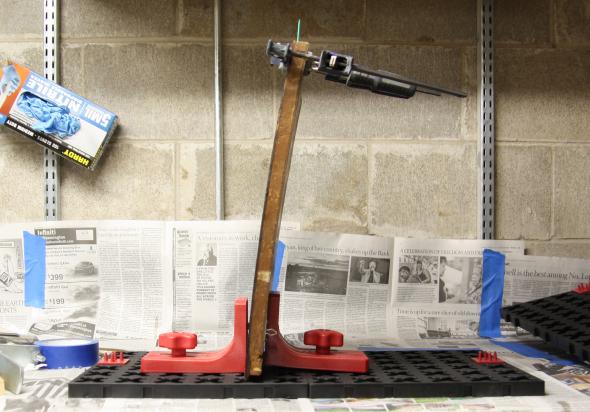 To fix the door, I squeezed glue into the split and filled in the enlarged hinge holes with wood plugs. So the glue wouldn’t run out of the crack and get all over the door, I tried propping the door upright using some L-supports. At first I tried using just two L-supports to hold the door up, but as you can see above the L-supports started lifting up out of their X-shaped holes. 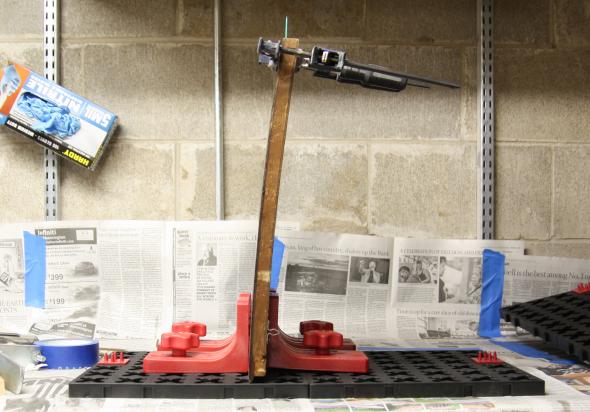 After adding two more L-supports, the door looked a bit more stable, but the supports still were still lifting out of their holes a bit. Woodpeckers claims one of the uses of the X-Mat System is for “assembling large cabinets.” If it takes four L-supports just to hold up this door with two clamps on top, how many L-supports will it take to hold the side of a large cabinet?

These are designed as vertical supports, but they don’t seem to handle off-centered loads very well, at least not in the same way that clamps might. 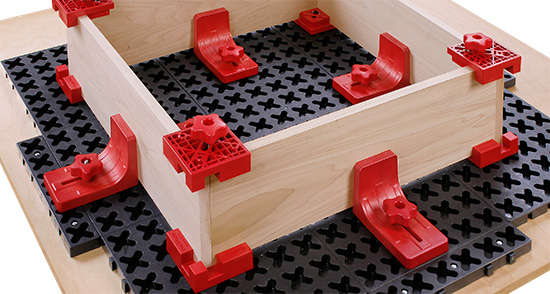 If you look at Woodpeckers’ product usage image, they have 4 pairs of L-supports holding up the sides of a cabinet or very large drawer. It seems that the L-supports in this case were used to hold the sides up for easier attachment of the corner clamps.

Another Woodpeckers product image shows L-supports being used in conjunction with corner clamps to support taller cabinet sides, and a pair of supports opposite each other vertically supporting a shorter board.

Finishing with the “Fingers”

Using the X-Mat system for finishing would be overkill if you didn’t already own it for assembly. The fingers only support the work piece at a few points, minimizing the contact with the finish, somewhat like painter’s pyramids ($6+ for 10 at Amazon) or Rockler finishing “points”.

Unlike painter’s pyramids, the fingers stay exactly where you put them and don’t slide around because they are securely locked into the holes of the X-mat. 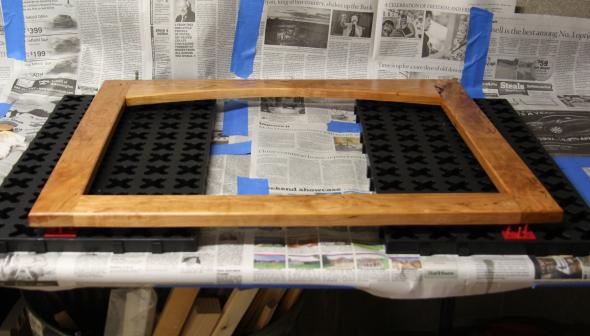 I used the fingers to support the cherry mirror I built in the Delve Square Review while I was applying the tung oil finish. They held the mirror pretty securely against my wiping motions until I turned the mirror upside down. As I applied tung oil to the back side, the wet tung oil on the front was enough to lubricate the fingers and cause the mirror to slide around.

This sliding really isn’t a knock against the X-Mat fingers, I haven’t really found any plastic product that keeps a wet workpiece from moving. The only thing I have found that stops wet finished from sliding is a bed of nails.

My wife and I have had an ongoing battle with the summer sun — it wakes us up way too early in the morning. Part of the solution was for my wife to make some curtains lined with black ultra-suede to block out the light, but some light still leaked in through the top of the window. So I decided to make some valances to cover the tops of the windows and block those sneaky rays.

My idea was to build a box out of red oak plywood and decorate it with some molding. I needed to make two identical valances so I thought this would be a good project to test the assembly system. I could set it up the X-Mats to assemble the first box and then use the same setup to line up and assemble the second box. 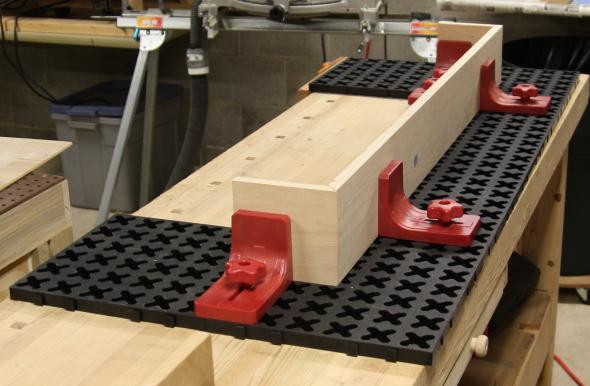 Once I had the pieces cut, I assembled some of the X-Mat squares into a 5′ by 2′ “C” shape, using only 7 of the 9 squares I had available — a real win for the versatility of the squares. Using four L-supports for the middle and two L-supports for each side, I was able to quickly make a jig for assembling the valance box.

When I was ready to glue the box together, I removed one of the box sides from the X-Mat jig, spread glue on both joints, and popped the piece back in place.

The jig didn’t hold the valance box together perfectly. I still had to align the pieces by hand as I shot some pin nails into the joint to hold it together while the glue dried, but I only had to make micro adjustments with my fingers. The jig saved me from having to support both workpieces with my hands while somehow also aligning and firing a pin nailer.

I did get glue all over the top of the X-Mat squares, but it wiped off easily with a wet paper towel.

Once I had glued the first valance box and let it sit for 30 minutes, I pulled it out of the jig and put the pieces for the second box into the jig. I was able to pull the assembled box straight up out of the jig and have all the L-supports stay in place. Putting pieces back into the jig wasn’t quite as easy, sometimes I had to separate two of the L-supports with my fingers to get the side to drop into the jig. Once I got all the pieces aligned, I assembled the second box just like the first. 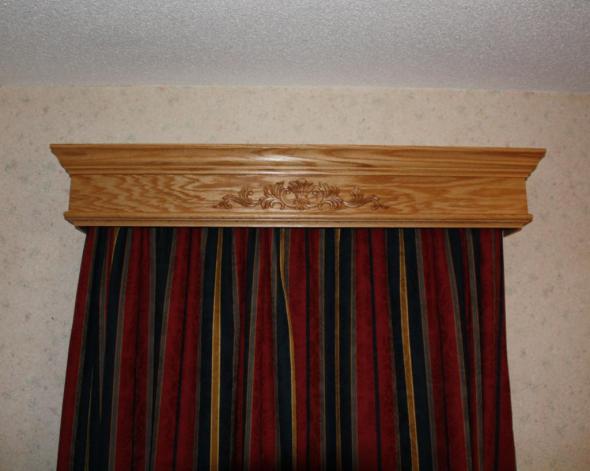 Using the X-Mats was just a small part of the valance project, but I won’t go into the rest of the details here. You can check out the full project in my workshop blog.

This was by no means a comprehensive review of the X-Mat Assembly System, I just tried to incorporate the system into some of the projects I tackle in my shop. While I definitely didn’t need the X-Mat System for any of the tasks I showed above, having it did make some of the tasks a little easier.

There were a few things about the X-Mat System that I was disappointed with. The L-supports have some play in them which is going to cause trouble holding larger pieces in place and the play also made sliding in new pieces a little tricky when after you build an assembly jig.

After working with the X-Mat System, I think a major unstated premise is that this system is designed to work in conjunction with Woodpeckers box clamps and not really as a stand alone system. Using these clamps to support the corners would make assemblies much more stable, especially larger ones.

One of the pros to this system is that it’s very configurable, you’re not just stuck with an X by Y configuration. I didn’t make any custom accessories in this review, but that’s another area where the system seems like it would be very versatile.

I also didn’t feel the necessity of securing the X-Mats to my bench with the secure strips, but if you are working on something larger, say a cabinet, I can see where they might come in handy.

In the end, this after using the X-Mat System, I found it wasn’t something that I would have purchased myself, although I can see the utility in the system if you assemble a lot of medium sized boxes, or if you are already invested in Woodpeckers box clamps.

If you wanted to buy this exact kit you’d pay $150 at Woodpeckers or $137 at Carbide Processors. There are a couple of other package options, and you can also buy all of the components separately.

Thank you to Carbide Processors for unconditionally providing the X-Mat Deluxe Kit 1 to review.