ToolGuyd > Power Tools > Cordless > New Harbor Freight Hercules and Bauer Cordless Heat Guns
If you buy something through our links, ToolGuyd might earn an affiliate commission. 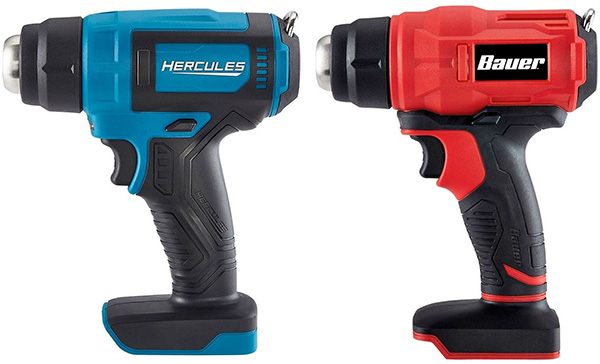 Harbor Freight has recently come out with two new cordless heat guns, one under their Hercules 20V Max cordless power tool system, and one under Bauer 20V “Hypermax.”

It’s not as simple as one of the new Harbor Freight cordless heat guns being blue and the other red, despite their identical $54.99 pricing.

Harbor Freight suggests that their Hercules cordless heat gun “compares to Milwaukee” and the Bauer “compares to Ryobi.”

The top marketing point about the Hercules is that it is compact and goes where corded model [sic] can’t. It’s said to be 35% more compact than a corded model. The Bauer is said to deliver the power and speed of cordless [heat] guns.

How long did it take before Milwaukee to come out with a cordless heat gun? Dewalt followed around a year ago. Then came a Craftsman model.

There are several interesting things about the new Harbor Freight cordless heat guns, aside from users having more options.

The Hercules line is still relatively new, and although there are quite a few tools so far, I wouldn’t have expected a cordless heat gun to come before many of the other types of tools missing from their lineup.

A good-better-best system doesn’t work so well, or rather it starts to get confusing, when “better” and “best” options – or similar – are priced exactly the same.

What might be different between these tools? The Bauer is said to have a slightly lower operating temperature than the Hercules. Is that it?

The Hercules is said to be more compact that corded tools, and reaches operating temperature in 5 seconds. The Bauer is said to be portable and versatile, and with the power and speed of corded heat guns. The tools are practically the same length, given Harbor Freight’s published specs.

I can’t help but feel a bit confused with how the tools are marketed.

Harbor Freight recommends using the Bauer with at least 3Ah batteries for longer runtime. The Hercules cools within 6 seconds of powering off, to improve element life. With the Bauer, there’s a “6 second automatic cool down mode that improves tool life.”

Granted that Hercules and Bauer are two different ecosystems, but if I didn’t know better I’d think they were competing against each other. Is the marketing language different in attempts to target different types of users? Or is it different enough to force greater distinction between two very similar and identically-priced tools?

Regardless of the why now, and what’s different questions that remain, more tool options are always good. I’m happy to see Harbor Freight pushing forward – keeping competitors on their toes benefits everyone.