ToolGuyd > Power Tools > Cordless > Harbor Freight Hercules Cordless Power Tools are Sold Out, LOTS More are Coming Soon
If you buy something through our links, ToolGuyd might earn an affiliate commission. 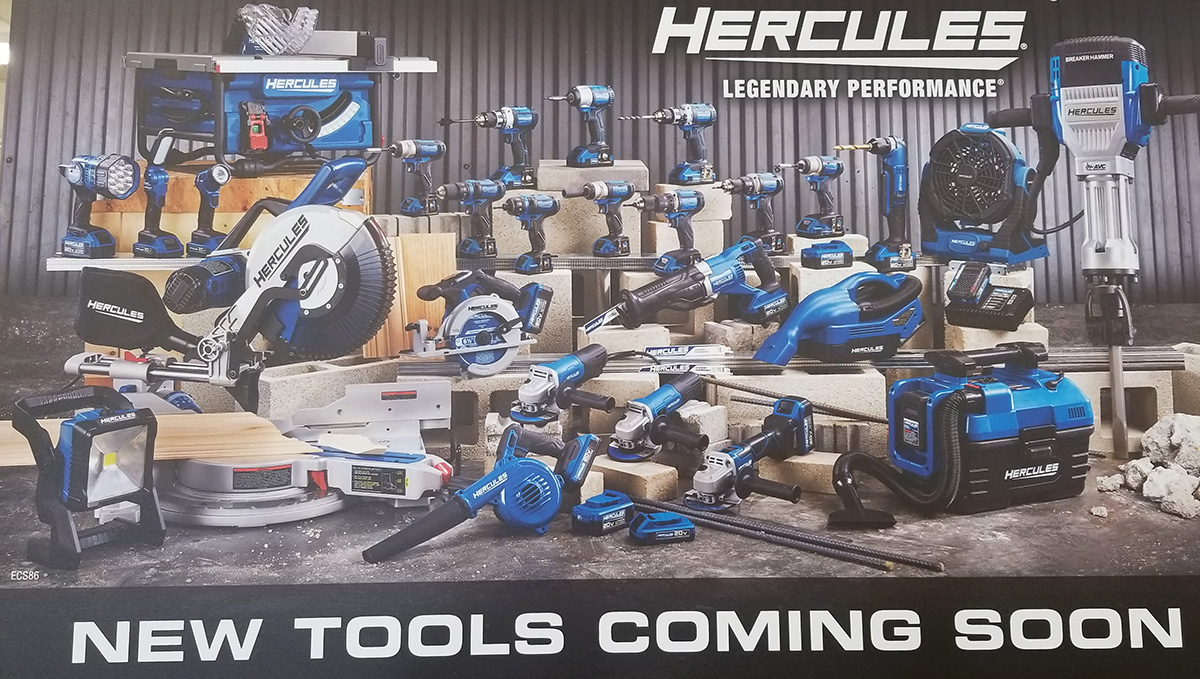 As mentioned in my recent “field trip to Harbor Freight…” post, I unsuccessfully sought out Hercules 12V cordless drills at two separate store locations. Actually, both stores were sold out of all of their Hercules cordless power tools, except for their newly launched reciprocating saw and blower.

So what’s going on at Harbor Freight? If you look online, the product listings for Harbor Freight tools tell you to check stores. In-store, there’s nothing there.

One store manager told me that distribution has halted, and an associate at a different store told me that the entire cordless platform was being revamped.

To get to the bottom of things, I spoke with Wes Harmelink, Harbor Freight’s VP of quality and product development. I spoke to Wes two years ago when they were beginning to push into the Pro Tools market with their Hercules line.

In the two years since then, Harbor Freight launched a new line of Fortress quiet air compressors, new US General tool boxes, more Hercules tools, and they are in the process of kicking off a new line of Icon professional hand tools and tool storage.

So what’s going on with Hercules? The entire cordless platform is being revamped, with the changes being mostly cosmetic. All Hercules cordless power tools and batteries will remain compatible, with the differences being in the styling and visual distinctions.

From the in-store signage above (it’s clickable if you want to zoom in), there are new Hercules LED worklights coming, a vacuum, a grinder, circular saw, more drills and drivers, and even a heavy-duty demolition hammer.

I’m told there will be new batteries, new charger options, and even some brushless cordless power tools.

There will also be more a la carte purchasing options, so that users can piece together kits of their choosing. Batteries will be priced “fairly.” Checking Harbor Freight’s website, their Hercules 20V 2.5Ah battery is priced at $25, and the 5.0Ah battery is $40. I’m told that these batteries “use the same Samsung Li-ion cells as other top brands.”

I have been to Harbor Freight stores two times in the past week, which is more times than in the past 5+ years combined. There are some changes, and I’m hoping to see more.

It continues to be interesting to watch Harbor Freight’s journey. Their goal at the moment is to maintain the “good” offerings that customers know to expect, while expanding upon “better” and “best” options.

This is actually a very refreshing stance in my opinion. One of my biggest frustrations with the Craftsman tool brand, from back when it was still owned by Sears, was that Sears seemed to have lost sight of “better” and “best” tool options, instead focusing on “good” tools that seemed primarily aimed at gift-givers and impulse buyers.

The new Craftsman tool brand, under Stanley Black & Decker, has launched a lot of tools in the past year, but I’m still not seeing many “better” or “best” options for more demanding users like myself. The current tools seem primarily aimed at homeowners, with some exceptions.

So what Harbor Freight is doing now is well-aligned with what I had wanted Sears to do with the Craftsman brand a few years ago. They’re striving to make better tools, and then an even higher tier, while maintaining their more entry-level options.

Harbor Freight has expanded their in-house talent pool, and although they seem to have gone through some growing pains, they are now pushing into new tool development territories. The need or desire to revamp the Hercules cordless platforms, for instance, results from a developing roadmap of new tool launches. Oh yes, there is a roadmap, and I’m actually quite excited at the potential it holds.

Is Harbor Freight a professional tool company now that can butt heads with brands such as Dewalt, Milwaukee, or Snap-on? I think that in many areas they have a ways to go, but they do already have some formidable tools.

Harbor Freight said they were looking to make a serious push into the pro tool market. My experience with Hercules 20V cordless power tools is that they’re closer than they’ve ever been before, and they’re working to launch even better tools.

Although the selection was limited at my local stores, I was quite impressed with the new Icon breaker bars. The pricing is higher than you would think for Harbor Freight tools, but if they truly compare well against Snap-on tools, they could possibly compete against other mid-priced brands, such as Gearwrench.

But, I do know that Harbor Freight is expanding their Hercules cordless power tool lineup. They wouldn’t do this if it weren’t supported by sales and customer popularity. I’ve been told by store managers and associates that the already-launched Hercules tools have been very popular, and customers have been asking for them by name.

Harbor Freight is making good on their promise to push into the professional cordless power tool market. It still remains to be seen how well they will compare, and whether they will be a serious player. Are they ready for the big leagues? They seem to think so.

I would say that Harbor Freight has their work cut out for them, but they do seem to be putting serious effort into their Hercules cordless power tool lineup and many of their other still-new brands.

The first new Hercules cordless power tools should be available in a couple of weeks, and you can expect more tool launches to follow.