ToolGuyd > News > RECALL: Stop Using These Harbor Freight Pittsburgh Automotive Jack Stands!
If you buy something through our links, ToolGuyd might earn an affiliate commission. 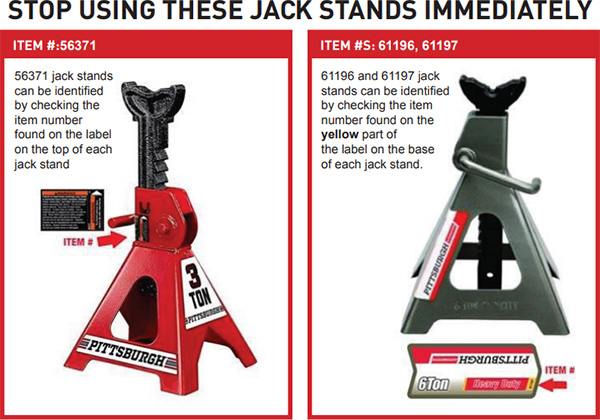 Harbor Freight has recall several models of jack stands for the potential to shift under weight and fail suddenly. Thank you to everyone who has sent this in!

There are 3 affected models:

If you have any of these jack stands, stop using them and return them to a Harbor Freight store (once COVID-19 pandemic stay-at-home orders are lifted) for a gift card valued at the retail price.

These are especially urgent recalls because of the severity of the potential consequences. Users can be seriously injured or even killed if jack stands fail while they’re working under a car. It is unclear as to whether there have been any injuries.

Harbor Freight says that they have been evaluating ALL of their jack stands.

An estimated 454,000 model 61197 Harbor Freight jack stands were recalled in March of this year, with an estimated 5% failure rate, as described in National Highway Traffic Safety Administration recall number 20E-016.

For certain units, the ratchet teeth on the jack stand lifting extension post may inconsistently engage the pawl to a sufficient depth.

And this can lead to:

Under load, with a potential shift in weight, on certain units the jack stand pawl may disengage from the extension lifting post, allowing the stand to drop suddenly, with potential to injure people near or under a lifted vehicle.

In other words, affected jack stands can give out during use and fail with potentially harmful or even fatal results.

What’s interesting is how this first recall came about:

Ongoing quality testing on the jack stands as manufactured, as well as analysis of, customer feedback, Quality Assurance review of product returned to Distribution Centers, and review of online social media content raised a potential safety issue on January 21, 2020. HFT initiated an investigation to conduct additional internal quality maintenance testing on each of its SKUs of jack stands.

See – brands and companies do pay attention to what you say online.

If you own these jack stands, you should discontinue use and return them to Harbor Freight for a gift card equal in value to the shelf price.

An estimated 5% of jack stands are thought to be affected by the defect, also caused by inconsistent product quality.

After ongoing quality testing, inspection and assurance reviews of 3 Ton Heavy Duty Steel Jack Stands manufactured by Jiaxing Golden Roc Tools Co., Ltd (exported by Shanghai Shen Da Import and Export Co Ltd.), it was determined that product quality was inconsistent due to aging of the tooling and inconsistent location indexing of the pawl armature hole.

There is a staggering number of these jack stands that are in the field and affected by this recall.

All jack stands imported from this manufacturer as part number 61196 and 56371 are included in the recall population. Although we believe this issue arose in more recent production batches, because we are not able confirm that earlier production units do not have this issue, out of an abundance of caution we are recalling all units prior to the recall date.

This makes sense. Newer jack stands are thought to be affected, but just to be safe Harbor Freight is recalling earlier models as well.

The risk of failure is the same as for the 6-ton model recalled earlier. Basically, the jack stands could fail when under load (i.e. holding up a car while you work under it), and with a potential shift in weight.

In all, Harbor Freight is recalling more than 1.7 million 3-ton and 6-ton automotive jack stands.

You can contact Harbor Freight for more information via [email protected] .

Harbor Freight has Extended Their Recall of Pittsburgh Jack Stands