ToolGuyd > Power Tools > Cordless > Harbor Freight Looks to Make Serious Push into Pro Tool Market
If you buy something through our links, ToolGuyd might earn an affiliate commission. 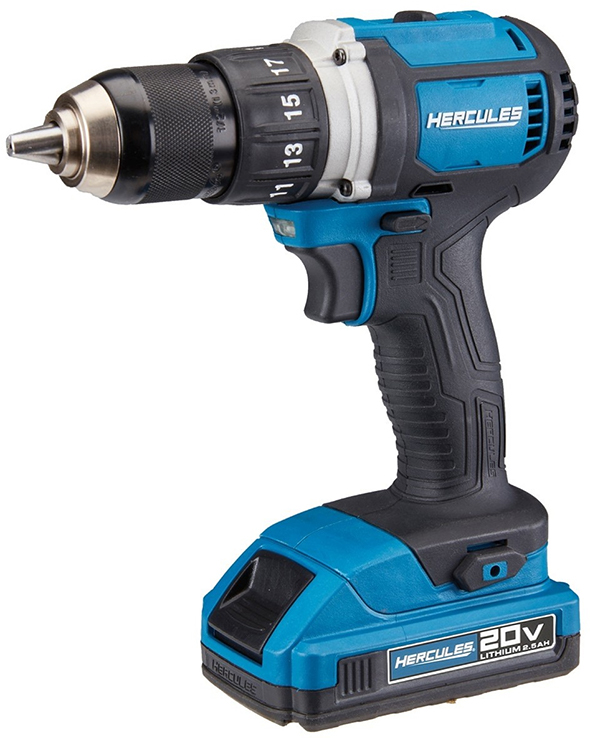 When I posted about the new line of Harbor Freight Hercules cordless drills and impact driver, I was curious but also skeptical.

Prompted by your responses to that post, as well as my growing curiosity, I wanted to reach out to Harbor Freight, wanting to know more about the Hercules tools, their development, and what it all means going forward.

They reached out first. (I had actually forgotten who reached out first, with the initial unpublished draft of this post inaccurately indicating that I had emailed them, wanting to know more. That’s how much my curiosity has grown; my eagerness to learn more led me to forget that they were faster in initiating the discussion.)

Yesterday I spoke with Wes Harmelink, a VP at Harbor Freight Tools’ Global Quality and Product Development department. It was a rather open-topic conversation, touching upon quite a few different areas.

I learned some things directly, such as there being are more tools on the way, but I also gained a sense of the culture, motivations, and happenings at Harbor Freight Tools as a whole right now.

Looking for More Tool Coverage? Subscribe to Our Newsletter

You won’t find a lot of existing Harbor Freight content on ToolGuyd, and in a storage bin you’ll find a tool or two that I purchased over the years, for research purposes. I don’t recall ever buying any Harbor Freight tools for personal use.

There’s a reason for that. I learned a long time ago that I didn’t have time or money for junky tools. I was more interested in tools that would serve me well for years. And most anyone will tell you, Harbor Freight tools, at least many of their offerings, were considered disposable. They were suitable for a quick non-critical job or task, and cheap enough that you didn’t care if or when they failed.

It’s a harsh generalization, but sums up how a lot of people feel about their tools.

A few years ago, discussions of “Harbor Freight tools worth buying” cropped up on a couple of enthusiast forums.

These new Harbor Freight Hercules cordless power tools – they’re the tip of the spear of what’s to come. With new developments these past few years, Harbor Freight discovered that users are willing to spend more for higher quality tools.

It was quickly obvious, speaking to Wes, that he is proud of the new tools, and of Harbor Freight’s direction. I do believe that the new Hercules tools, and some of the products we talked about, are about offering good quality and highly capable tools at affordable prices lower than typical pro brands can offer through their traditional retail channels.

Right now, I stand pretty convinced that they are currently working towards validating that slogan. Actions speak louder than words, and they’re taking all the right actions.

Harbor Freight has hired new talent, such as experienced tool designers, engineers, and experts. They’re testing their tools over time, ensuring they meet their performance and quality standards. They’re investing in quality components, such as name-brand chucks, motors, and other sub-components that many power tool manufacturers don’t produce themselves. They’re investing in change, and I’m told that we’ll see changes coming to stores as well.

I still have more testing to do, but the Hercules drill and impact driver that I bought – they’re not bad. They’re not perfect either, but I am impressed.

As mentioned in this off-topic post about fear of failure, the only way to avoid failure is to not try at all. While the new Hercules tools aren’t perfect, they’re a good effort as a first attempt at good quality pro-grade cordless power tools.

As even well-seasoned professional power tool makers have learned, getting tools produced and out in the hands of users is the only way to know what needs to be improved.

While I only spoke to one person at Harbor Freight Tools, Wes seems to be in the driver’s seat, helping to steer the company towards their new direction. And that new direction should scare other tool brands and manufacturers.

They believe in the changes they’re making, and the new tools that they’re coming out with were designed with quality and performance in mind. They’re investing in and working towards the concept that you can have tools that offer high performance, good quality, and affordable pricing.

This new push has been a couple of years in the making, and is way bigger than I had anticipated.

Upon learning of the new Hercules tools, I was very skeptical. Take a fresh look at my Harbor Freight Hercules cordless powers tools preview post for a reminder. I said things like:

It’s hard to take these tools seriously, first given Harbor Freight’s reputation of cheap throwaway tools, but second because these look to be heavily copied designs.

When a professional tool brand comes out with a new tool, thought has gone into each component. Every design aspect results from a deliberate decision.

These new Hercules tools, as it turns out, are deliberately designed. These tools are an attempt to make high quality tools that would serve even pro users’ needs.

I honestly didn’t expect that, given Harbor Freight’s history and reputation.

I always assumed that their Chicago Electric tools were slapped-together designs using readily available components and basic housings to hold them all together. Whether I was right or not, things are not that way with the new Hercules tools.

Harbor Freight is doing airflow modeling, simulations, and testing to improve motor fan designs. They’re optimizing the grease for their impact driver mechanism. And working with top-shelf brands to build their Li-ion battery packs. Among other things.

These are signs that they’re undergoing a transformation. What do you think all this new in-house experience will amount to? Perhaps better and better tools.

I am very excited to see where things are headed. My expectations have been raised, and I’m hoping that I won’t be disappointed.

On the phone call, we talked about a few recent products that were similarly designed with quality, performance, reliability, and other such good things in mind. The new breed of cordless power tools is a big push along that same path.

These examples make it easier for me to feel optimistic, but more than that, the sense of pride at Harbor Freight is what convinced me.

When you talk to someone at Harbor Freight who genuinely seems proud of the new and upcoming tools they have a hand in developing and steering, it’s hard not to be convinced.

It’s going to be very interesting to see what Harbor Freight does next. I am now not so much skeptical as I am cautious. Cautious, interested, and optimistic.