ToolGuyd > Hand Tools > Screwdrivers > Hart Now Makes Screwdrivers, Including a Unique Double-Ended Multi-Bit Driver
If you buy something through our links, ToolGuyd might earn an affiliate commission. 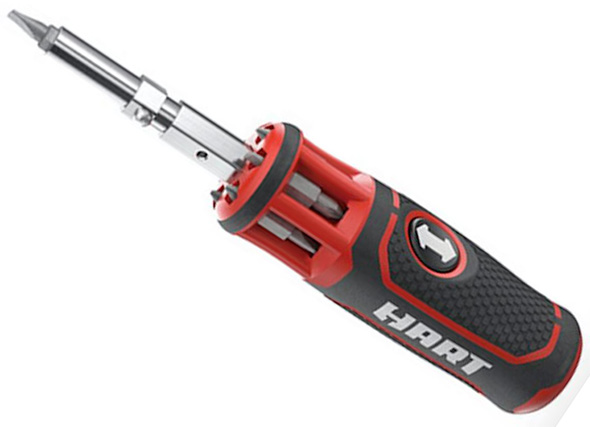 Hart, a TTI brand, makes some interesting hand tools, such as quick-adjust c-clamps, hand clamps, and interchangeable handle system tiling tools. The brand is historically known for their hammers.

Now, Hart has come out with some new screwdrivers, including a rather interesting-looking double-ended multi-bit driver.

The Hart double-ended screwdriver (HPTS01) has a quick-access button, which when pushed, allows the bit-holder shaft to slide through the handle. Their product images don’t show this very well, but the inside of the screwdriver handle is hollow. So, the shaft protrudes from one end, and with a push of the button and one-handed action, the front end becomes recessed, and the opposite end is now exposed.

Yes, it sounds a little gimmicky, but it could perhaps be a problem-solver for certain users or applications.

The Hart multi-bit screwdriver also has a built-in wire stripper and bender that’s sized for wire up to 12 gauge.

The driver is $10 at TTI’s Direct Tools factory outlet. 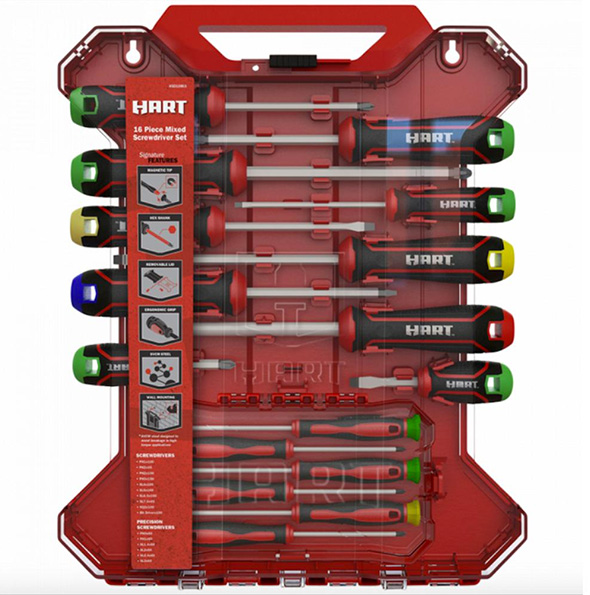 Hart also has a 16pc variety screwdriver set, with a little of everything, HSD16MIX. It comes with a mountable screwdriver storage rack.

They don’t actually tell you the sizes, but it looks to have Phillips, slotted, and maybe square screwdriver styles, as well as a 6pc mini driver set.

TTI’s Direct Tools factory outlet has it for $20. 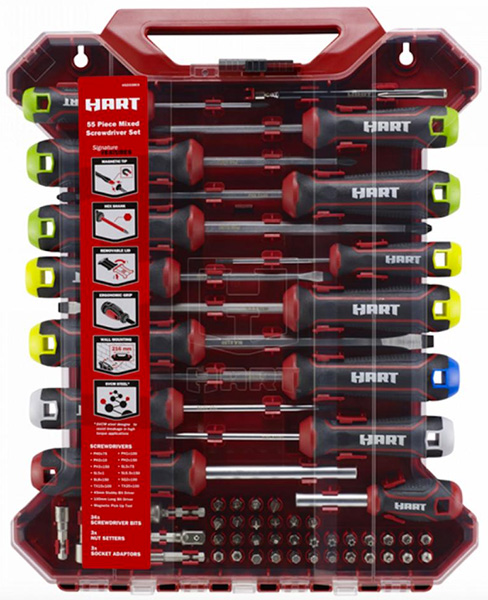 The larger Hart screwdriver set looks to come with 12 screwdrivers, 2 bit-holding screwdriver handles of different sizes, and a whole lot of insert bits and bit adapters.

It also looks to have a magnetic pickup tool, or something that looks just like that. The case is mountable, as with the 16pc set.

TTI’s Direct Tools factory outlet has it for $30.

The Hart double-ended multi-bit screwdriver caught my attention with its unique design. Yes, it does seem a little gimmicky, but I figured it was worth posting about, just in case it’s *exactly* what someone might need.

The other Hart screwdriver sets look to have some appealing aspects, such as their wall-mountable storage cases that have handles and keyhole slots, and the color-coded handles.

I wouldn’t have expected to see Hart screwdrivers, but then again, neither did I expect to see a Ryobi tape measure. Ryobi also now has a couple of hammers, and that might be a post for another time.