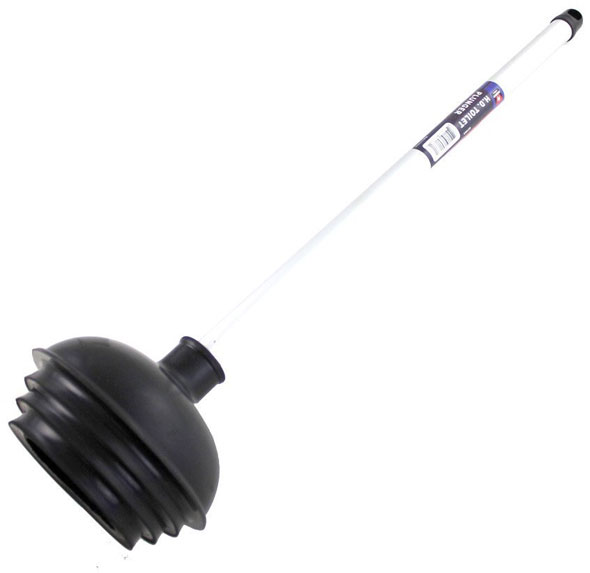 A reader wrote in, asking for a couple of heavy duty toilet plunger recommendations. The ones they’ve been trying to use for heavy doodie unclogging applications keep breaking.

I have never broken a toilet plunger, but can imagine that plastic-handled ones might be less robust than wooden-handled ones. But I can also understand the hesitation for wood plungers, as wood is more porous and could be more difficult to clean and sanitize.

Right now, we’ve got an Oxo plunger that my parents got for us as an apartment-warming gift ($23 via Amazon). It’s only been used a couple of times to clear up mysterious clogs, but I can’t imagine how it might break.

I came across a “heavy-duty” aluminum-handled plunger ($23 for two), one that comes with a “how to poop like a pro” E-book ($15 via Amazon, and I wish I was kidding about the book), and a bunch of others that look only slightly different from each other. Amazon’s best-selling plunger has a steel handle ($15 via Amazon).

There’s nothing wrong with having to unclog a toilet – it happens. Drains sometimes need to be unclogged with a plunger as well. At my old research lab a custodian decided to wring out a mop in an already-slow-draining laboratory sink, which required a lot of plunger use to unclog. There was so much hair – where did it come from!!?

Breaking 1 plunger doesn’t seem like a big deal. But 2, 3, 5? That’s an indicator that it’s time to buy an auger, power plunger, or some other kind of drain-clearing accessory.

The reader indicated that different people in their household have been breaking the plungers. Seems to me that a sturdy metal-handled plunger is the right way to go. But even then, the reader says most of their plungers have failed at the point where the accordion or flange cup meet the handle.

So… which plunger would you recommend for the type of user that has broken every type of consumer plunger that they sell at big box stores? I would think that the steel-handled one on Amazon might be good, as it looks to have a solid cup-handle joint and many positive user reviews.