ToolGuyd > Power Tools > Cordless > HOT Hitachi Impact Driver Deal!! (12/2018)
If you buy something through our links, ToolGuyd might earn an affiliate commission. 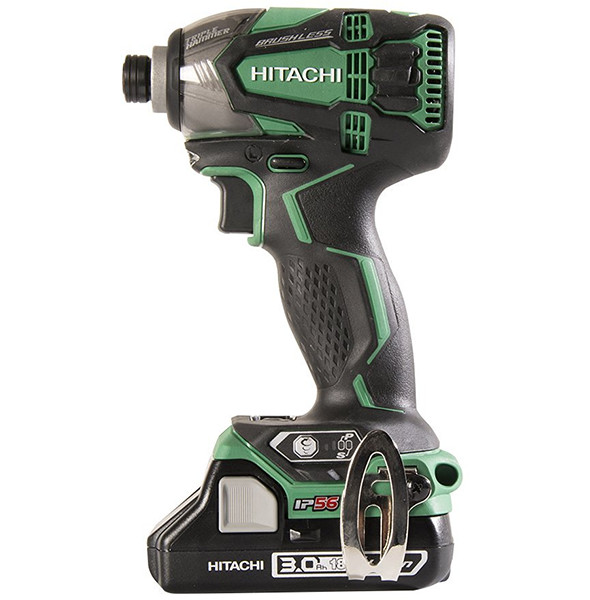 Steve wrote in with a tip (thank you!), describing how he was able to score a Hitachi 18V brushless triple hammer impact driver, (2) 3.0Ah battery packs, and a charger, and for just $139.

Update: Thank you also to Robert for the tip!!

Update (2:40pm ET): It looks like the deal reached its limit.

I believed him, but… I had to see it for myself. And, HE’S RIGHT!

Over at Acme Tools, they have the Hitachi triple hammer impact driver, reviewed here, for $199. That’s the bare tool. Thru 12/31/18, it’s eligible for an instant $60 discount, which is automatically applied to your cart. Okay, great, $139 for the bare tool. But there’s another promo it’s also eligible for, where you get a starter kit, with (2) 3.0Ah compact batteries and a charger, for FREE.

I’ve been using a review sample since the triple hammer impact driver came out, and it’s by far my favorite impact driver. Others are pretty good, even almost as good, but this one’s my favorite. It’s hard to recommend at times, though, because the kit costs $369! (Price check via Amazon.) How can I recommend a $369 impact driver kit when there are other really good impact drivers that cost a lot less?

Right now, you can buy an M18 Fuel impact driver kit for $149 as part of a holiday season promo. The M18 is a very good tool, even excellent, but I prefer the Hitachi. But at more than double the price for the kit? Eh…

For $139, though? This is a great impact driver at a great price. A superb price.

As Steve mentioned in his comment, you’re basically getting the $369 kit, except for the carrying case. To save $239 compared to the price of the kit? I can live with having to source my own carrying bag or tool box.

The bare tool is regularly $199, before $60 instant discount, and they say that the 2 battery and charger starter kit has a value of $119. So technically you’re saving $179 with this deal. Amazon has the bare tool for $154 at the moment, but they’re not participating in the free starter kit promo.

Promo: $139 for the bare tool, plus a free (2) battery and charger starter kit

Update (2:40pm ET): It looks like the deal reached its limit.

All of the discounts show up automatically in your cart before checkout. Shipping to the 48 contiguous states is free. Fine print.

P.S. The deal’s so good I just had to buy one for myself. Yes, even though I still have a test sample that I’ve been using. This way, the impact becomes *mine*, and I can donate or give away the other one locally.

Thank you Steve for the heads-up!