ToolGuyd > Power Tools > Saws > Hitachi Jig Saw Magic – 2 New Models with Interesting Features
If you buy something through our links, ToolGuyd might earn an affiliate commission. 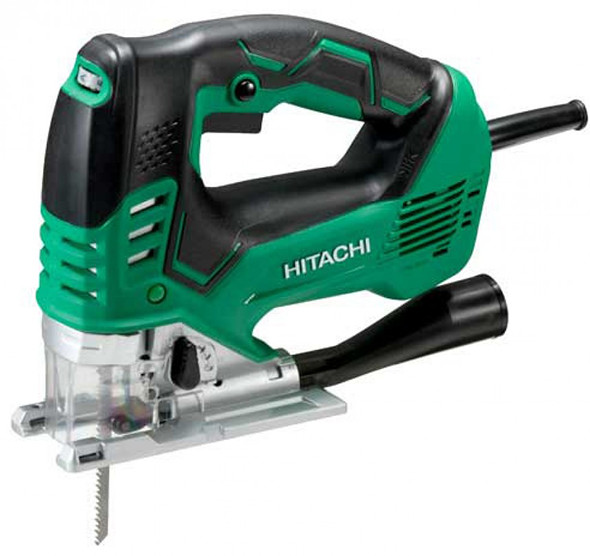 Hitachi has come out with two new corded jig saws, one with a D-handle grip (CJ160V), and another with a barrel grip (CJ160VA). Most interestingly, the new saw feature an auto mode that starts the saw in slow speed – similar to what their new cordless brushless grinder offers.

When engaged in auto mode, both jigs operate a lower no-load speed, 1,400 SPM which means lower vibrations and more control. Once you start a cut and the motor begins to experience a load, the speed kicks up to a full 2,800 strokes per minute.

Hitachi says that the auto mode will reduce vibrations at the start of a cut by approximately 50%, compared to if you were to instead start a cut at full speed.

In auto mode, once the tool reaches it full operating speed after a cut is started, it maintains that speed until the switch is turned off. 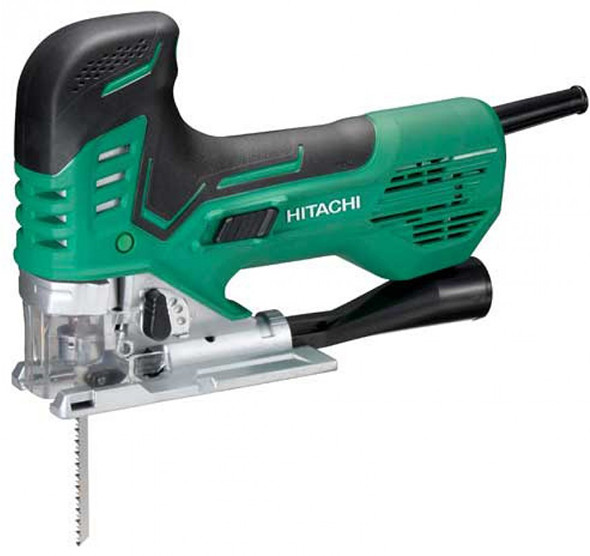 Both of the new Hitachi D-handle and barrel grip jig saws offer the same features and specs. The choice is a matter of preference, with a lot of woodworkers preferring barrel grips for the lower gripping position and enhanced control. 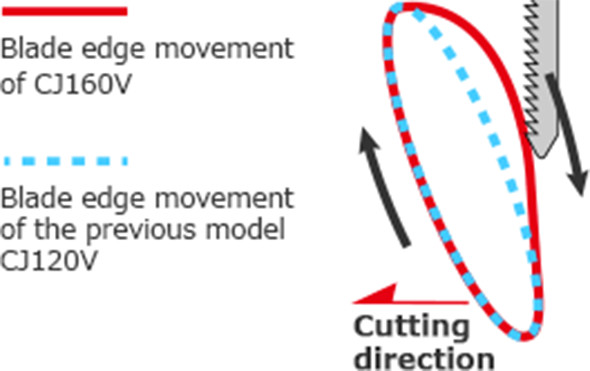 This image, grabbed from Hitachi’s product page, shows the new orbital blade path of the new jig saws. They say that orbital operation can be adjusted to suit the work material for smoother cutting.

It looks like the jig saws pull the blade further back, but takes the same bite out of workpieces as before. They say that this new orbital path can be adjusted for smoother cutting, perhaps with the new path facilitating chip clearing?

In addition to the standard (non-marring?) base, the saws come with a sub base that’s meant to be used for cutting curves. The short sub base greatly reduces the contact area between the base plate and workpiece, leaving a gap between the back of the base, which isn’t covered by the sub base, and the workpiece.

Hitachi says that this eliminates any snags that might occur between the rear of the base and work material, which should result in easier curved cutting.

It has been a while since I was excited about a corded jig saw. While the 2 new Hitachi offerings won’t have me jumping up and down giddily, I do find myself quite enthusiastic about them.

First, there’s that auto speed mode again. They built this into their cordless brushless grinder, and now it’s in these jig saws. And it makes perfect sense. With a tool like this, you start the tool, and then engage a workpiece to start the cut.

It can be a challenge at times, to start a cut with a power tool running at full speed. With the auto mode, the motor starts at half speed, and accelerates to full speed once there’s a load on the motor. You should get approximately 50% less vibrations, which should make it easier to start the cut with greater precision.

And if you don’t like this feature or need a slower cutting speed, simply use the saw at any of its manually-selected speeds.

You get a slew of other user-friendly features, such as the LED worklight, blower function (for clearing debris from the cut line for greater visibility), orbital settings, and a dust collection port.

That dust collection port is the biggest clue that these are European models. Most brands often leave out these things from USA models. When I asked another brand about it, they said something about how it’s not something American users ask for or require. But you know what, I bet more people would use them if it came with their tools. Hopefully, if Hitachi releases these saws here, they’ll supply ’em with the same dust collection port. I’d definitely use it.