ToolGuyd > Compressors, Air Tools, Nailers > Hitachi and Lowes Announce an Exclusive Partnership
Happy New Year!
If you buy something through our links, ToolGuyd might earn an affiliate commission. 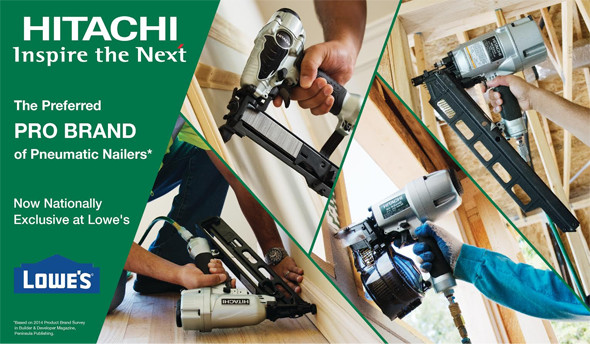 There seems to be an emphasis on Hitachi’s pneumatic nailers, nails, and other related fastening accessories. The press release also says that new power tool displays will start appearing in stores this month.

Exclusive arrangements are nothing new in the tool and home improvement industry. Some are announced, such as Klein and Home Depot’s arrangement, most are not. Some are contested, such as in Ace Hardware’s 2013 lawsuit against Home Depot, Makita, and Milwaukee.

Some brands switch exclusivity or near-exclusivity between Home Depot and Lowes, such as what we have recently seen with Irwin.

There are several things to be on the lookout after an announcement like this hits. 1) Which stores will Hitachi tools disappear from? And the less obvious question: 2) Will any brand be squeezed out of Lowes stores or be otherwise de-emphasized?

And so it seems this is just an in-store partnership. There aren’t many nationwide tool and home improvement retailers, mainly Home Depot, Lowes, and Sears. Did Home Depot and Sears ever sell Hitachi power tools or air nailers in-store, or only online?

I think that the second question is a more interesting one to consider. Which brand’s place will Hitachi take? Lowes always offered a selection of Hitachi power tools, but this partnership seems to signal an expansion.

Or maybe Lowes is looking to replace their Kobalt 18V and “improved” 20V Max tools. Kobalt upped the battery pack capacity and changed branding to relaunch the older Kobalt 18V cordless power tools as “20V Max” ones. But they haven’t really added any new tools to the lineup since the 18V family was originally launched.

Hitachi, on the other hand, has been steadily updating and adding to their cordless product line. They just recently came out with a new brushless oscillating multi-tool.

Back to the point – you’re going to see some increased Hitachi promotion at Lowes stores starting this month. What do you think about this new arrangement?