In response to my post on Hitachi’s affordably-priced compact 18V 3.0Ah battery pack, Matt asked: Have you read about the “multi volt” platform they are releasing in little under a year?

The answer is yes, but I’m still not sure what to think about it. From their promo video, it seems that Hitachi does plan on bringing the MultiVolt platform to the USA, but I haven’t heard any official ETA or details yet.

Hitachi MultiVolt will feature a new 36V battery pack that’s the same sizes as the existing 18V 6.0Ah battery pack. It will presumably weigh around the same.

The front part of the battery pack looks a little different – perhaps that’s to fit new mechanical or electronic components.

I couldn’t find any information about how the 36V to 18V voltage switching is done.

I saw mention of the 36V battery being physically locked out of 18V fans. 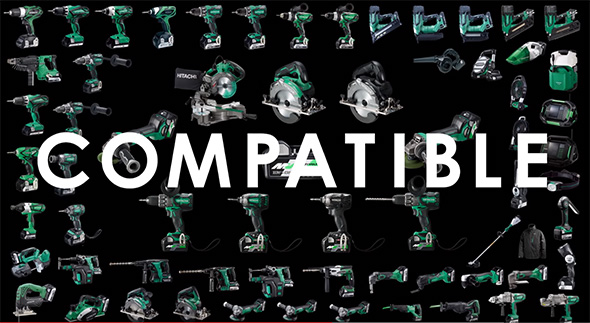 In this screen-grab from Hitachi’s promo video, you can see that the MultiVolt battery is expected to be compatible with a wide range of 18V cordless power tools, outside the initial launch of 36V tools.

I would presume that you can NOT use 18V battery packs in the new 36V tools. That’s why it seems to be a FlexVolt-like system to me, but with some differences.

Here’s where things might get a little complicated… there are what look to be 18V-sized tools included in the 36V launch. But you can NOT use 18V battery packs with them.

While the same is true for Dewalt’s FlexVolt tools, you’re unlikely to mistake any FlexVolt tools for 20V Max tools, except for maybe the 7-1/4″ circular saw if you have both FlexVolt and 20V Max versions.

The new 36V tools have an important notice on their product pages: 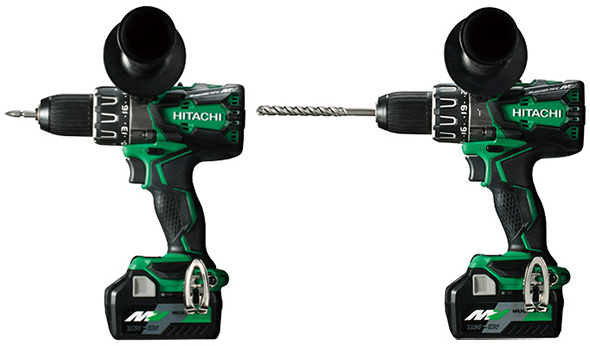 There will be a new heavy duty cordless drill, and also a hammer. They’re said to be significantly faster and more powerful than Hitachi’s leading 18V brushless drill.

If a sudden load is applied to the tip tool and the rotational speed of the motor drops rapidly, the output is stopped before the tool main body is swung, and the load on the operator is reduced.

They also mention that RFC is not guaranteed to work in all kinds of work scenarios or situations. 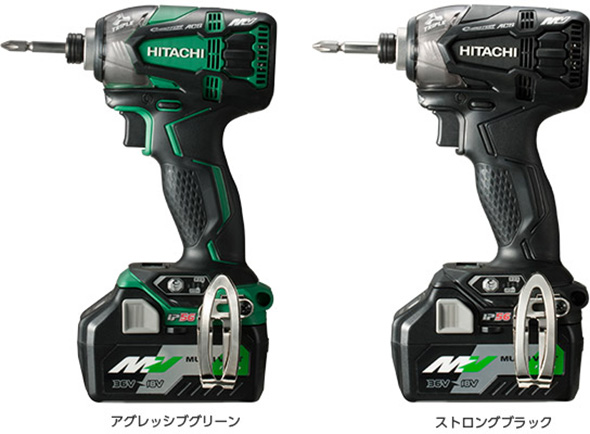 As with the drills, Hitachi emphasizes the ability of the new tools to withstand continuous heavy duty use.

By increasing the voltage of the lithium-ion battery from 18 V to 36 V, the temperature rise of the motor part is suppressed and even when working continuously, it becomes harder to stop than the 18 V product.

In other words, the motors should be slower to overheat under very demanding applications. 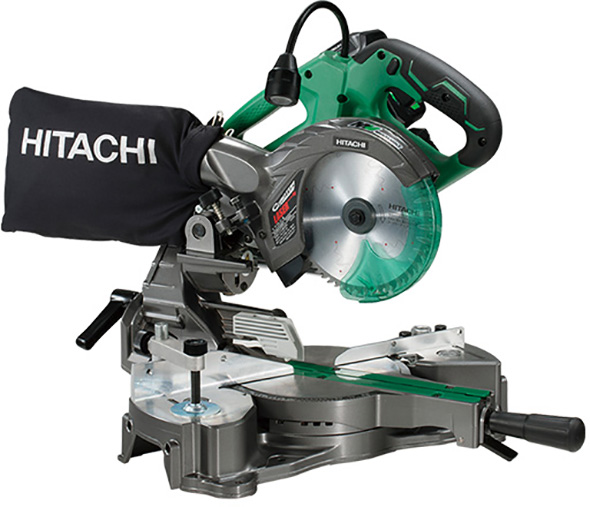 There’s a new cordless sliding miter saw. Sorry, it’s NOT a hybrid saw. That dongle at the top is an LED worklight, not a power cord adapter.

It has a brushless motor, compact and lightweight design, and works with blades 155 to 165 in diameter with a 20mm arbor hole. I’m guessing the USA version will have a 6-1/2″ blade size.

That’s surprising; I would have thought they’d at least have went with a 7-1/4″ blade size. But on the bright side, it weighs under 22 lbs with battery pack installed.

Cut capacity at 90° is 40 x 182 mm, or ~1.57″ x ~7.17″. You could cut slightly thicker (but narrower) workpieces, but not without risk. The translation makes the reason unclear, but they say there’s the risk of the saw head coming into contact with your work.

The sliding mechanism is fixed to the rear, with the saw head sliding forward. This is why the tool has a smaller footprint, allowing for wider cutting without requiring lots of clearance behind the saw. 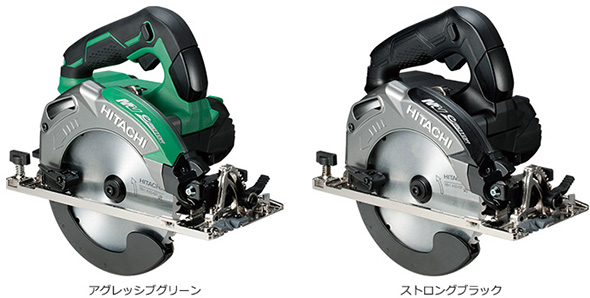 There will of course be a new higher performing circular saw, available in “aggressive green” or “strong black” colors. You can see the MultiVolt saw in action in the promo video at the end of the post.

Its design makes it easy to change blades, and the saw also features a “quiet mode” that reduces the speed and lowers operating noise by 5 dB.

In silent mode, the tool will automatically switch back to power mode when the load requires it.

If all that wasn’t enough, there’s kickback mitigation, which will drop the motor speed if the blade is pinched. 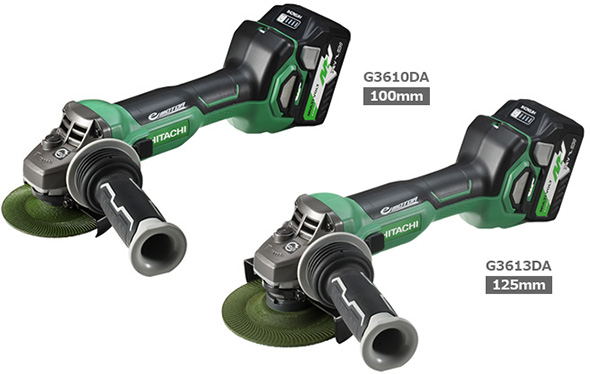 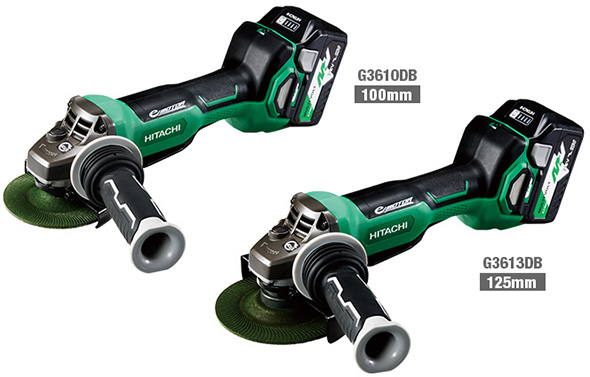 I interpret this as saying that the new MultiVolt grinders can pull and deliver greater power than Hitachi’s existing corded and cordless tools.

Hitachi claims some of the same as for the other tools, that these new grinders will perform faster and endure heavy duty work conditions for longer.

The grinders have variable speed motors, and an auto mode that switches from 5,000 to 10,000 RPM when the tools sense the work conditions require it. 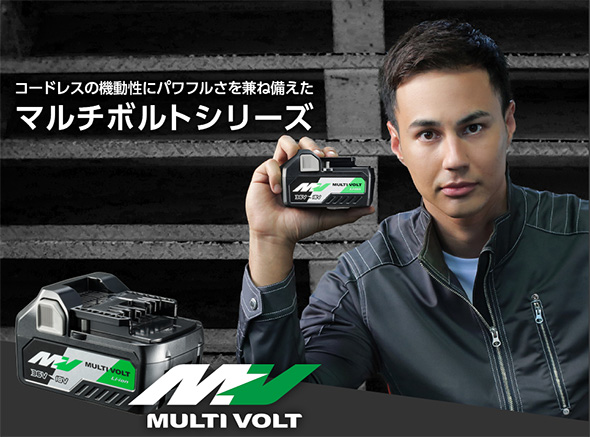 Did you notice that it doesn’t say Hitachi on the new battery packs? The new 36V MultiVolt tools do sport Hitachi branding, though.

Some have reported that the sale of Hitachi and Metabo to KKR has started a countdown as to how long Hitachi Power Tool can use the Hitachi brand name. I haven’t seen official mention of this anywhere, but it’s something I have wondered about.

The new Hitachi MultiVolt system looks good – on paper. But does it have enough future potential to compete against Dewalt’s FlexVolt lineup, or whatever Milwaukee has cooked up for their next-generation push?

I would guess that Hitachi has Makita as the biggest competitor in their sights. Would you rather have a 36V tool with 2 batteries used one at a time, or a 2x18V tool that needs 2 batteries connected at the same time? Working with 1 battery tends to be more consistent. And what if you can use that 1 battery on your 36V tools or your 18V tools?

I think I would be a lot more WOWed if it wasn’t for Dewalt’s FlexVolt line setting the bar and certain expectations.

Everything sounds great, but why do I feel like something’s missing? Maybe an 18V to MultiVolt adapter that allows for 2x Hitachi battery packs to be used? Such an adapter might be clunky, but maybe it would help everything feel a little more complete.