ToolGuyd > DIY & Home > Home Automation – Do You Have a Smart Home? Connected Lights? Other Devices?
If you buy something through our links, ToolGuyd might earn an affiliate commission. 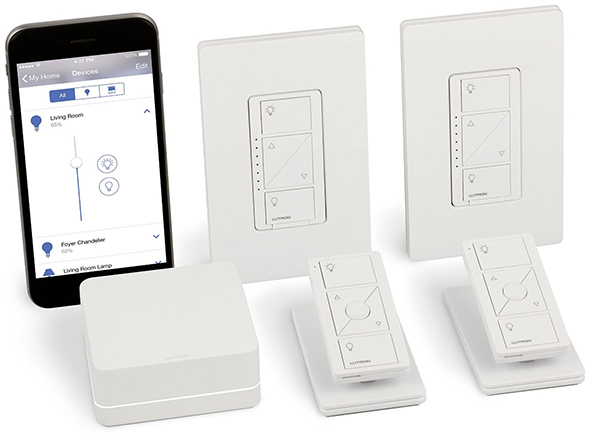 Yesterday, as part of Amazon’s Prime Day deals, their Echo device was on sale. I had mulled over buying one, and then took the plunge. (Thanks, Ben!)

The Echo can play music, but its big selling point is the Alexa voice-activated controls. It can tell you the weather and spit out other information, but it can also work with various brands’ home automation products.

Shown above is Lutron’s Caseta light dimmer kit ($190 via Amazon), an example of “smart” connectable devices.

I like the idea behind what these products can do.

We have one room where there’s a light switch in a stupid place. I’ve been meaning to put in a 3-way switch on the other side of the room, but there’s an existing switch there controlling a wall outlet. It’s dumb. The Caseta dimmers are appealing even without the Wireless Smart Bridge, as it means I can attach the wireless dimmer remote to make the light switch behave like a 3-way.

Our upstairs hall light is also a bit dumbly designed. There’s a switch downstairs, which is good, but the upstairs switch is in the middle of the hallway. It would be better placed at the top of the stairs. Using a Caseta wireless dimmer kit, I could in theory add a 3rd control point, for 4-way-like lighting.

I could also add a sensor for turning on the light whenever someone is in the hallway.

With more advanced control, I could perhaps set the upstairs hallway light to turn on when it detects movement after say 6pm.

There are now connectable:

A few years ago we went to Las Vegas, staying at the Aria for a short night before driving to Zion National Park in Utah. Everything was automated, and it was slow and clunky.

In the meantime, is your home connected? Smart? Pseudo-automated?

Do you have any recommendations?

What kinds of things would you want us to test out?