ToolGuyd > Power Tools > Drills & Drivers > From Devils to Demons: Is Home Depot Switching from Bosch Spade Drill Bits to Diablo?
If you buy something through our links, ToolGuyd might earn an affiliate commission. 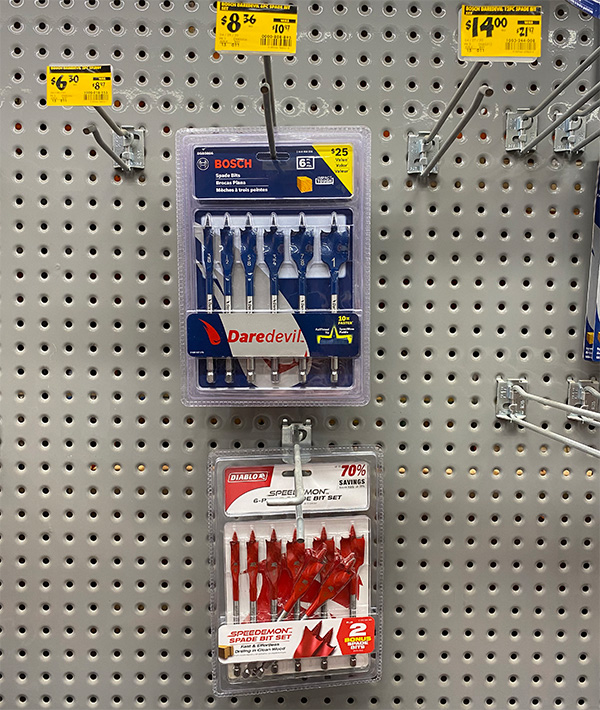 Over at Home Depot, it looks like they are replacing their selection of Bosch Daredevil spade drill bits with Diablo SpeedDemon spade bits.

All of the Bosch Daredevil bits and sets are marked down, and a sole Diablo set appeared on the shelf, a touch of red where there used to be a sea of blue.

The 6+2 bit set didn’t have a price tag, but is advertised as saving you up to 70%, presumably off the full retail prices of all 8 individual bits. It’s priced at $10.

Given that Diablo is a Bosch-owned brand, and that these new SpeedDemon spade bits look identical (at least without microscopic scrutiny), could they simply be Bosch Daredevil bits in Diablo-red color?

We have not seen any press releases from Diablo yet, and so there are few official details or insights to draw from.

From Home Depot’s website, it looks like there will be different sets, individual sizes, stubby bits, and 16″ bits in some sizes.

The product listings say that the bits can be used in corded or cordless impact and drill/drivers, which was also true for Bosch Daredevil bits.

A store associate commented that the Diablo spade bits are all priced lower than the Bosch spade bits they seem to be replacing. But while the $10 for 8 bit pricing seems decent, Home Depot’s past Bosch promo displays were far better. During promo seasons, we’ve seen a similar 6+2 spade bit set selling for $5, a 10+2 set for $10, and an 18pc set with case for $20.

If the individual bits are priced lower, that’ll be great. I have found it to be cost effective to stock up on promo sets rather than just 2 or 3 bit sizes, leaving me with a very uneven number of spares.

Do these Diablo Speeddemon drill bits offer any benefits over Bosch Daredevil bits? Maybe that’s why there hasn’t been any press releases or official launch information from Diablo?

WHY is Home Depot seemingly shifting over from Diablo to Bosch for spade bits? Given the Diablo dominance in circular saw blades and sanding pads, and the split presence in reciprocating saw blades alongside Milwaukee, this could very well be done for as part of a greater consistency or brand unification effort.

It seems like a small move, to go from Bosch bits to Bosch-owned Diablo bits that appear to be identical aside from the blue vs. red color scheme, but changes like this are extremely impactful when it comes to branding and user recognition.

It also seems like “savings” is a big part of the marketing as well. For instance, there’s a 9pc set on Home Depot’s website, and similar to the prominent “up to 70% savings” blurb for the 8pc set, that 9pc set advertises “up to 60% savings” as one of its key selling points.

The comment from an associate that said Diablo bits are priced lower than Bosch’s leads me to wonder: Are these Bosch Dardevil bits in Diablo red colors, or is there something else that’s different about them? Will they offer more performance? Lower? Greater durability? Less?

Have you seen any changeover at your local Home Depot yet? It could be that they’re testing things at certain stores, or this could be a nationwide rollout.