ToolGuyd > DealGuyd > Home Depot Holiday 2016: Tool Storage Deals
If you buy something through our links, ToolGuyd might earn an affiliate commission. 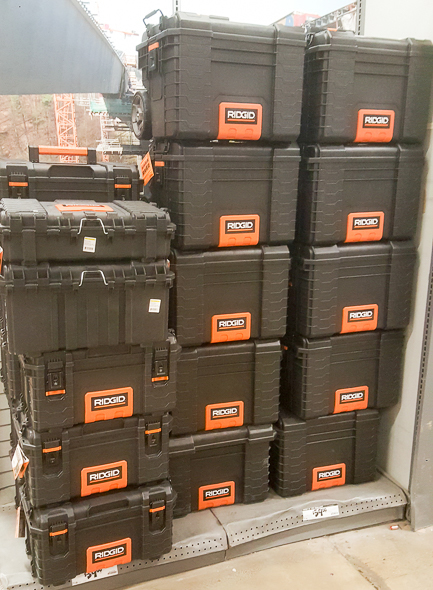 This is a great time of year to upgrade or add to your tool storage!

Home Depot had a nice spread of Husky tool bags in their deals center, but none of them appeared to be on sale. Yet? There will probably be a tool bag bundle pack or something similar once Black Friday rolls around.

If you’ve taken advantage of some of Home Depot’s hand tool deals, you might need a new place to put them.

Or maybe, like myself, you look forward to this time of year to expand your tool storage system for as little coin as possible. 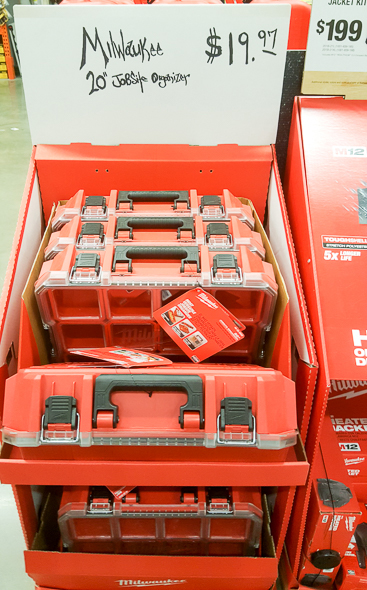 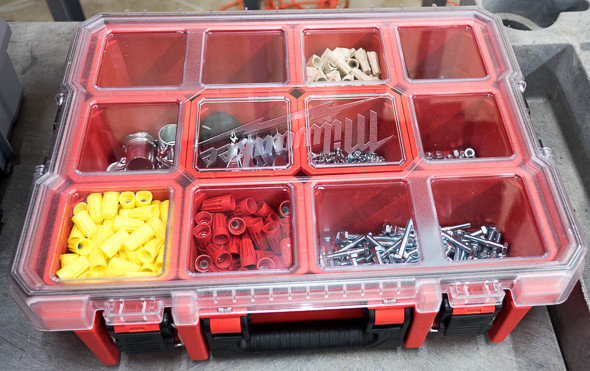 Milwaukee’s 10-compartment organizer is awesome! They’re normally priced at $25, and stack together nicely. The best part is that you can still open an organizer that’s attached to others.

This organizer is better suited for larger parts and fasteners, such as wire nuts, construction screws, and nails. Very small parts, such as #2 washers, will be lost in the large-ish removable bins.

You get 2 double-length bins, and 8 square ones.

I’ve got maybe 5 of these, 2 of them Milwaukee-provided samples, the others purchased during past years’ holiday season pricing. 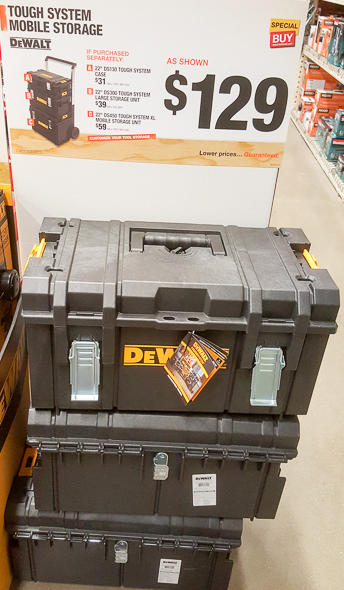 Home Depot is providing special pricing on a trio of Dewalt Tough System tool storage boxes, including a rolling tool cart, a new lesser-frilled but still awesome small tool box, and a large Tough System box that is on sale for $39 at Amazon and Home Depot.

It’s my understanding that the price of the large tough system box was slashed to drop the total cost of the 3-box rolling tool box combo. But hey, a discount is a discount.

I haven’t seen the rolling cart in stores yet, but am told that they should be arriving mid-month.

If you ask me, the large Tough System tool box is the star of the show, but I’m also eager to check out the rolling tool box once available. 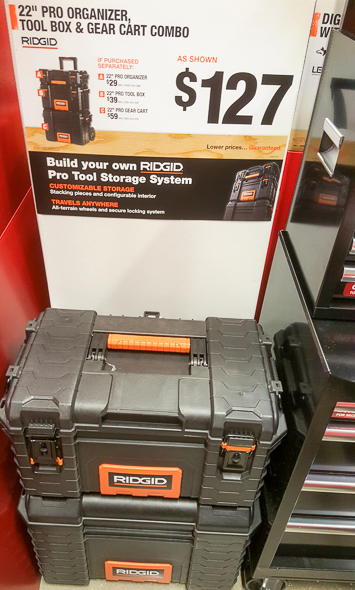 The Ridgid 3-box combo has been a recurring holiday season deal a few years in a row, now.

The Black Friday deal pricing will likely go like this: Buy the cart at $59 and large tool box for $39, and get the small tool box for free ($29 value). The total cost for the 3 box combo would then be $98. 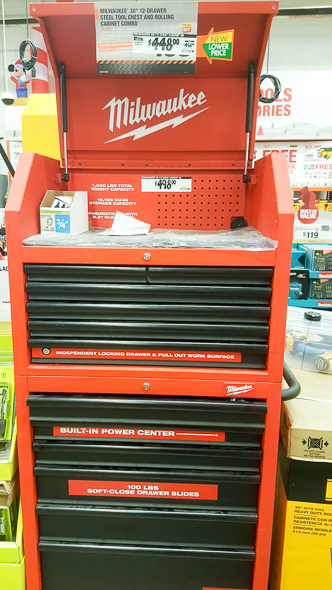 $448 is a great price for what you get – check out our review of the Milwaukee 30″ tool storage combo. Ben and I both have had great experiences with this combo. 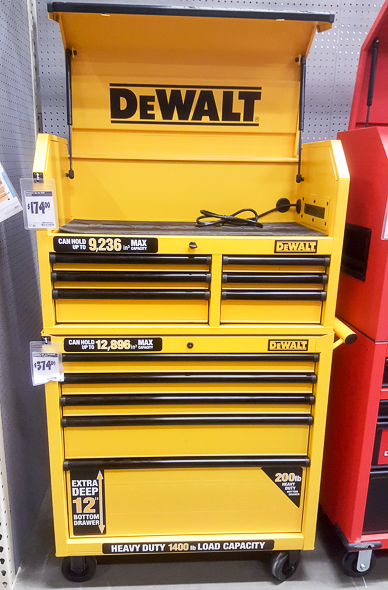 I don’t have any experience with Dewalt’s 36″ tool storage combo, but it seems to have nice reviews. It looks like this is the same combo that first came out in May of 2014. 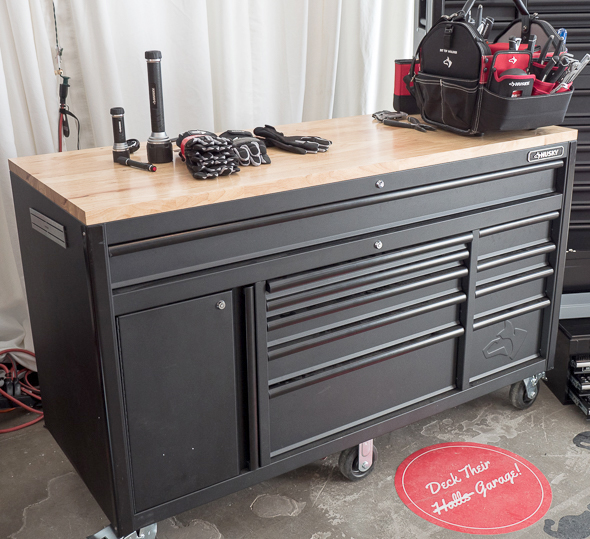 It’s almost crazy how big and usable this new Husky 60″ mobile tool storage workbench is. It has a full 24″ deep worktop!

The drawers are strong and smooth, the overall construction feels top-notch, and possibly best of all, it’s actually a very usable workbench. Lock the wheels, and it’s as sturdy as can be.

I like the drawer layout a bit better than Milwaukee’s, too. That full-length top drawer is amazing, and it doesn’t bind! 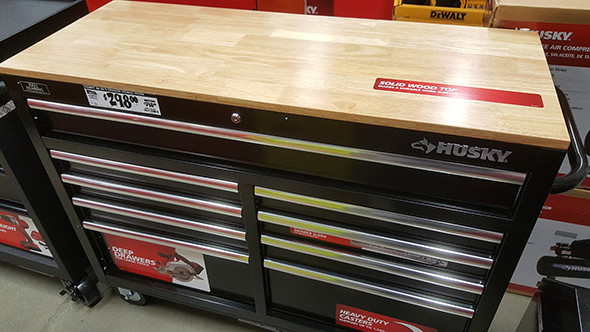 Need something a little smaller, lighter duty, and less expensive? Husky’s 46″ mobile workbench isn’t the prettiest, strongest, or most capble tool storage workbench out there, but a quick in-store examination has left me optimistic. Not bad for $300. 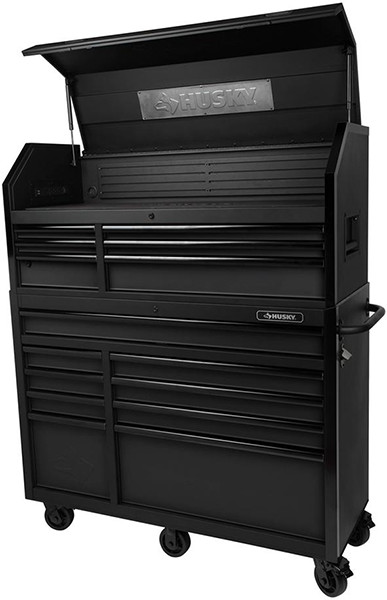 I have to admit – I was not very happy when I received one of these for testing. I was expecting the new 56″ combo, but this one arrived sooner and unexpected.

But I was impressed with it. The drawer slides seem to live up to their heavy duty 120 lb load rating, and overall the box just seems nice and effortless to use.

I don’t like the angle aluminum trim, not at all. Reaching over the box once, and I was scratched at a corner where 2 trim pieces meet at an angle. When I mentioned this to Husky, they said that they were aware of the issue and working to fix it at the factory.

While initially a little disappointed, thinking that I was being asked to test a lesser frilled tool storage combo that was cheapened to meet a $700 retail price target, I was nicely surprised at the quality you get and for the high bang for the buck. This is a nice ball bearing tool storage combo. 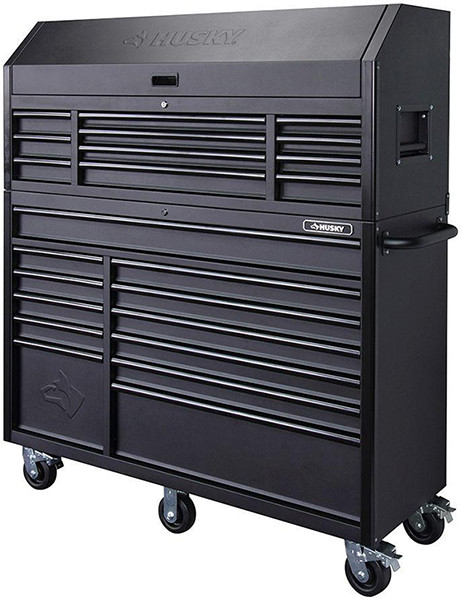 This is the biggest tool storage combo I have ever tested in my workspace. It’s HUGE, but in a way that offers a positive user experience.

It’s strong, it’s sturdy, it’s got a massive top cabinet drawer that doesn’t bind, and it features the same (or nearly identical) quick-toggle casters that Milwaukee also uses on their tool storage cabinets.

What I love about this combo is that you get loads of hand tool storage potential, and there’s also some capacity for storing power tools and other bulkier items.

This Husky combo is simply superb. It’s pricey, but I think it’s more than justified for what you get. 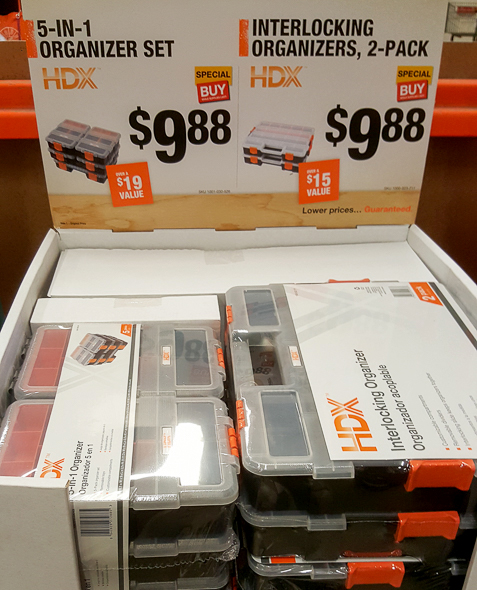 I almost missed these organizers in the Home Depot tool deals gift center. The 5-in-1 looks particularly interesting. 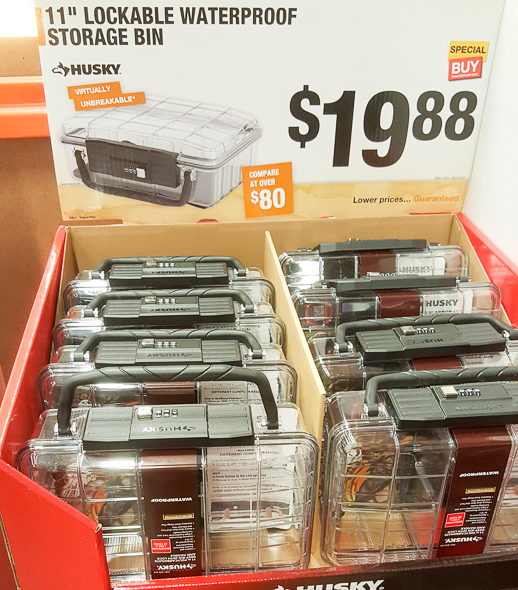 What could you use something like this for? You don’t see lots of lockable storage boxes with clear lids.