ToolGuyd > Editorial > I Ordered Pipe from Home Depot, This is What They Sent by Mistake (4/2020)
If you buy something through our links, ToolGuyd might earn an affiliate commission. 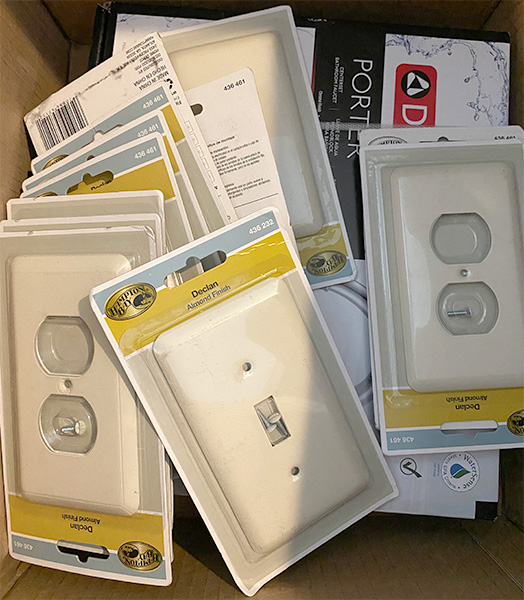 We’re all only human and mistakes happen. I recently wrote about an order for perforated drainage pipe that left me with 100 feet of uncut pipe I can’t use. (That pipe has since been donated to an irrigation and drainage company). It seems that my bad luck with pipe orders continues, as there was also a mix-up with my recent Home Depot order.

9 days later, I received the above shipment, with a Delta water faucet and a whole house-worth of almond-colored outlet and light switch cover plates.

I’m not at all happy about this, and it turns out it’s the 2nd such mix-up in my last 6 Home Depot online orders. One of those other orders resulted in a product utterly destroyed by insufficient packaging and rough shipping, but that’s more the supplier’s fault.

The first mix-up resulted in my being sent a smartphone case instead of a Ryobi hammer.

With this mix-up, it’s a water faucet and electrical device covers instead of 2-foot pipe sections.

While I am extremely frustrated, mistakes do happen. Now, with online fulfillment centers very over-burdened due to COVID-19 social distancing and a huge surge in demand, I am thankful they’re even taking and shipping orders.

Maybe a label printer jammed or something similar, and the error was mechanical in nature? Or maybe this is all part of Skynet’s slow and steady takeover plan.

After a length hold time, I spoke with a Home Depot agent who set up a return and the reorder. It’ll be another 10 days before my order is expected to arrive. She waived the shipping fees on the replacement order, since the total cost was lower than the $45 threshold, and could have upgraded the shipping speed if needed, but since I can stand the wait I declined.

The UPS pickup for the return package was supposed to be yesterday. I found a label wedged under a separate delivery, and will probably have to venture off to the UPS store later today before I head off to the supermarket for a 2-week perishable food resupply. That’s an added frustration, but there’s not much I can do about it.

Maybe I can wait for the next UPS delivery and ask the driver to take the packages, but they’re all heavily worked these days too, and perhaps it’ll be easier to social distance at a drop-off location.

Someone out there received my package of 4 CPVC pipes, but I can’t tell if I received their order and they received mine, or if this mix-up involved a larger group of people who all received the wrong order.

If there’s a simple human error, the labels on two boxes could be switched. But is it possible that a machine error or combination of mistakes resulted in a several people – or more – all receiving the wrong packages? I don’t know enough about how orders are fulfilled to do more than guess.

Yes, I’m frustrated that it’ll likely be 3 weeks between when I placed my order and I receive the items I paid for – *knock on wood* baring any other unforeseen complications.

But, here’s the part that really confuses and amuses me: the return shipping label is headed to Home Depot’s return center in Indiana, but is addressed to Charlotte Pipe and Foundry. Does this mean they’re going to send it back to Chartlotte Pipe?

It greatly amuses me to imagine the expressions and reactions someone at Charlotte Pipe would make as they receive a box of outlet covers and sink faucet as a return.

I know this is probably not how it will all work out, but I figure it’s better to be amused at how I imagine it’ll play out than to allow myself to feel frustrated at the inconvenience.

And hey – it could be worse. Unless the mix-up resulted in the same order being filled twice, someone out there received my 2-foot pipes or something else instead of a box of almond-colored outlet and light switch covers and Delta faucet.

This type of mix-up can happen with any retailer. For now, I’m chalking it up to bad luck that this happened with 2 of my last 6 Home Depot online orders, with the incidents timed ~6 months apart.

Amazon Germany once sent me a cheap humidity monitor instead of a Knipex tool mini wire stripping tool. Amazon once sent me a Knipex cable cutter instead of Knipex diagonal cutters, but that seemed like a “picking” or inventory placement error. Ah, and once a long time ago, Amazon sent me the wrong letter/number drill bits than the one I ordered.

It seems rare for an entire shipment to be different like this, but I’m sure weirder things have happened and will happen in the future.

What’s the lesson here? I probably shouldn’t order any more pipes via mail order anymore – who knows what’ll happen next if these things happen in threes…

For now, I’m just going to keep imagining the face of someone at the pipe company eventually receiving this box of stuff as returns.

What kind of online order mix-ups have you experienced?