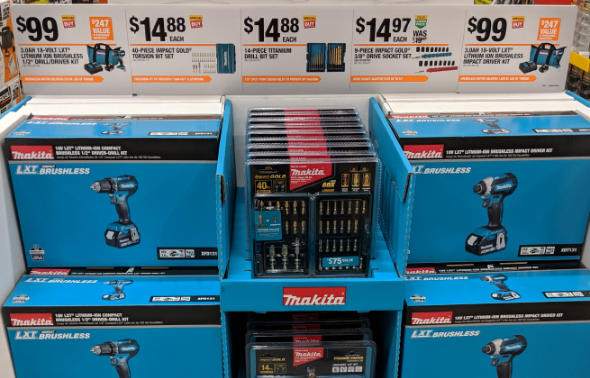 Stuart’s Note: My local Home Depot doesn’t have anything up yet, but I expect that to change soon. Most if not all Home Depots should have their seasonal tool promo displays up soon.

Each Home Depot seems to carry their own mix of the same holiday Special Buys and deals, but if your local store doesn’t have a specific deal, you can find most of them online. I’ll also post links for the items I can find. Pricing can also vary from store to store on some products. That is because there are some products that the local managers have more control over, and other products they have to sell at a fixed price.

Last year, what I observed was the prices on the products where the managers have discretion creep down between now and Black Friday, then they reset after Black Friday and creep down again until after the holiday season and eventually find their way into clearance.

Some products, likely the ones that the managers don’t have control over, stay the same price and eventually disappear into the rafters of the store until the next deal season. There’s no guarantee that’s what will happen this year, but I suspect we’ll see the same behavior.

Here’s some of the products I think are worth watching over the next few months. 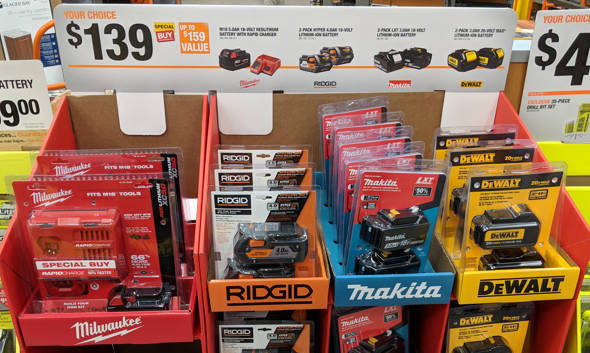 We expect for the battery 2-packs to drop to $99, as they have in the past. 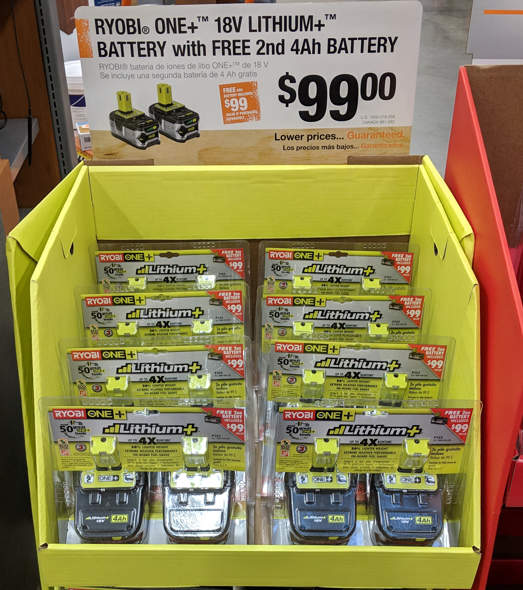 We see this every year, but $99 is still a decent deal for two Ryobi Lithium+ 4Ah batteries. 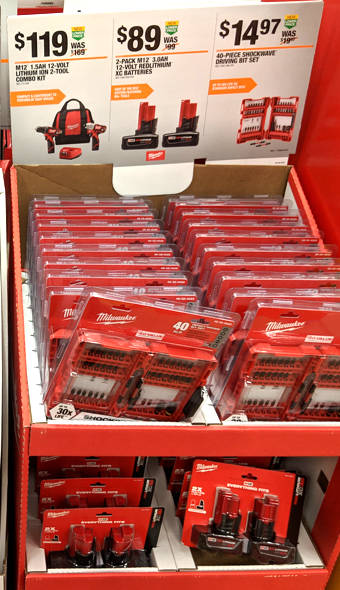 It just wouldn’t be the holiday season if you couldn’t get a package of two Milwaukee M12 3Ah (6 cell) battteries for $89.

The M12 drill and impact driver, shown on the poster but not in the photo, is all but guaranteed to drop to $99, based on historical trends.

(The price historically decreases later in the month.) 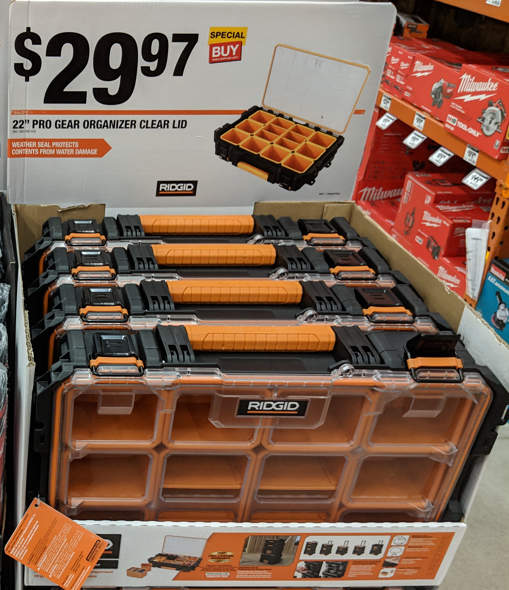 Since it’s new, we don’t know if the price will change. 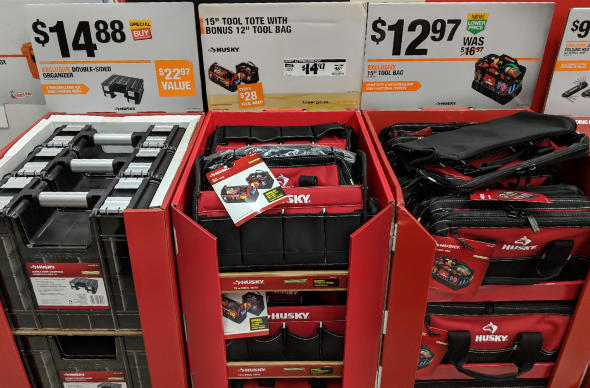 Next up is a trio of part and tool carrying solutions for under $15.

I’ve never tried the double sided organizer, but I really like the style of organizer that has removable bins rather than dividers. It makes it easier to remove parts and if you standardize on one system you can just grab the bins you need for a particular job rather than carrying half a dozen cases.

I favor tool totes over bags, but the 15″ tool bag looks interesting with the pockets on the outside as well as the large zippered compartment. 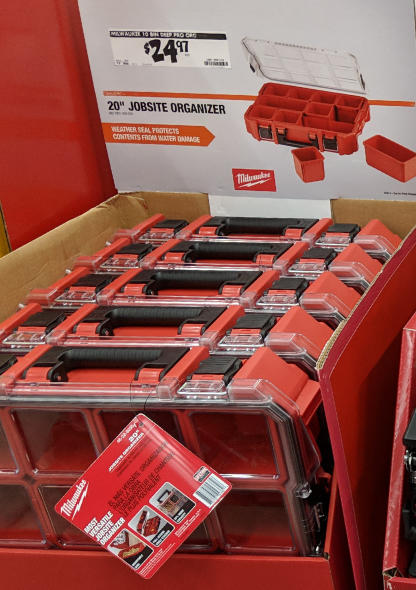 Just because it’s in a special display, that doesn’t mean you should spend full price on a regularly stocked item. You can get a much better deal if you wait on these Milwaukee 20″ job site organizers, which regularly go on sale for $20. 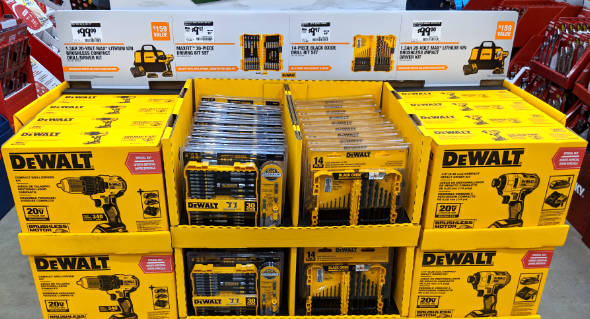 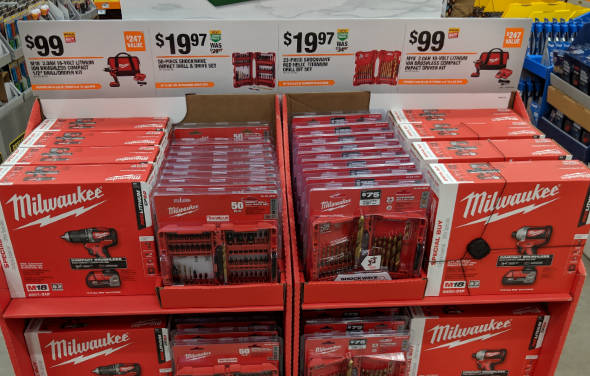 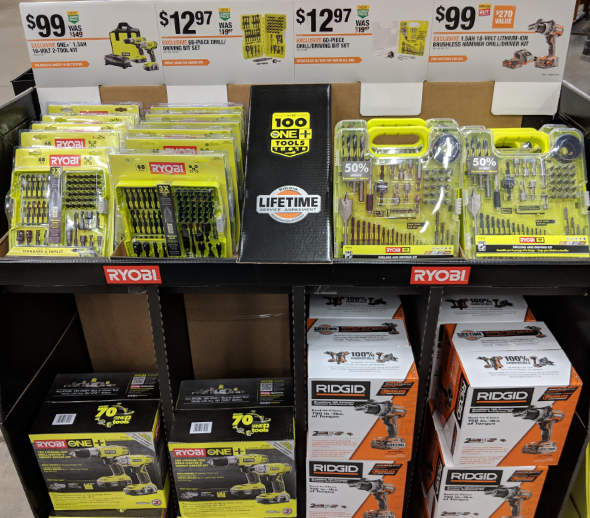 For $99 you could get the Ryobi 18V drill/impact driver kit with two 1.3Ah batteries charger and bag, or a Ridgid brushless hammer drill with two 1.5Ah batteries and a charger. 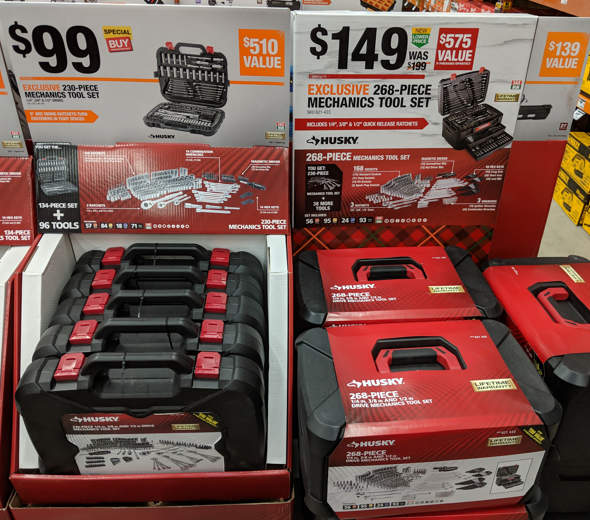 Tool kits are a good gift idea for kids leaving the nest, people buying a first time house, or first car, They are also good deals if you want a variety of tools packaged much cheaper than buying individual tools.

This year there are several Husky Mechanics tool kits for sale. 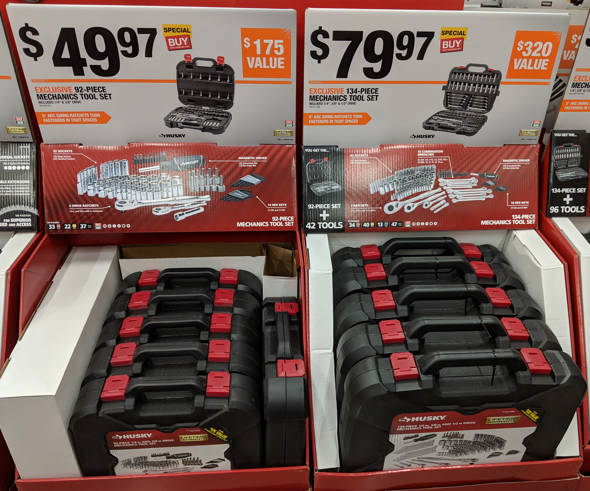 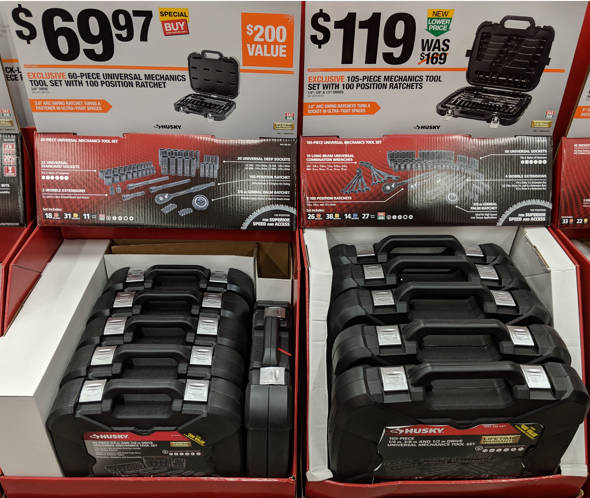 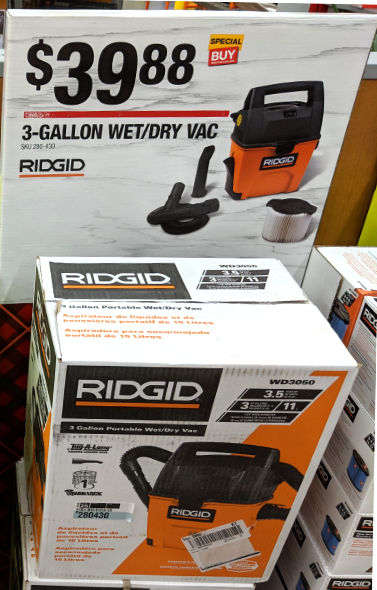 Ridgid has a compact 3 gallon wet dry vac for $40.

(There are bound to be more wet/dry shop vacuum deals.) 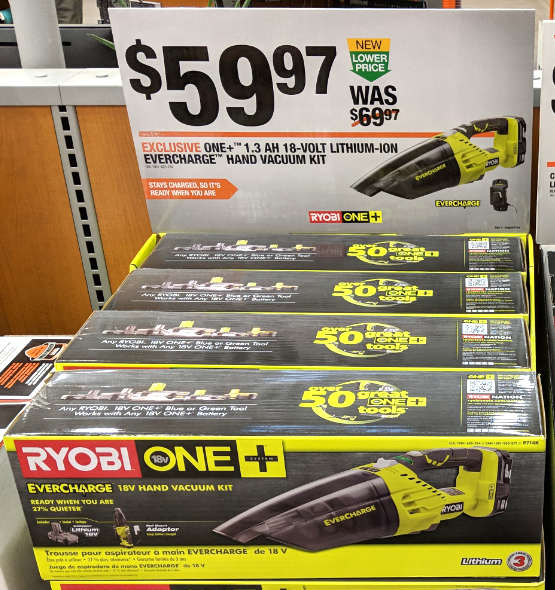 Ryobi is discounting their EverCharge 18V hand vacuum to $60.

I’m not going to link to the rest of these random tools, frankly my eyes are starting to cross and I’m probably giving Stuart a headache. I’m going to provide a link where you can see all the special holiday buys online at the end of the post. 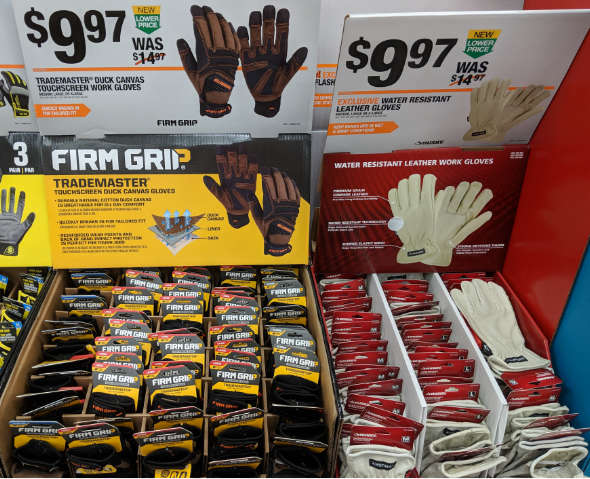 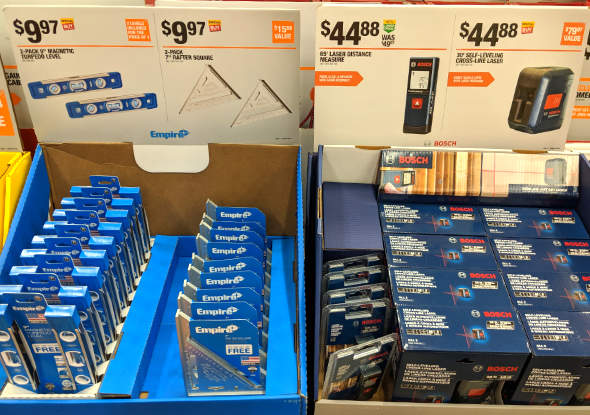 The “two for $10” Empire levels and rafter squares have been a staple of past holiday seasons. I’ve never tried this particular Bosch laser distance measuring tool, but I have the bigger brother of the 30′ cross line laser and I’ve found it indispensable. 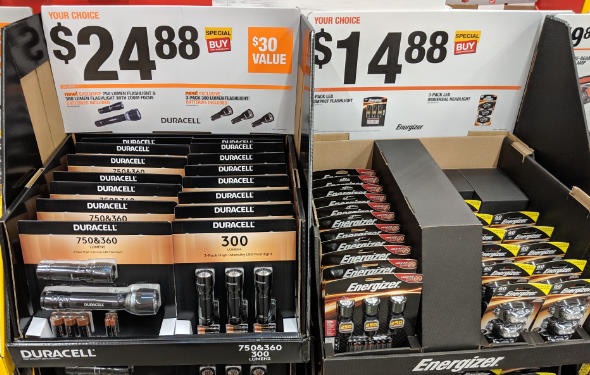 I counted 16 different flashlight and headlamp deals. I’m not counting the stick up lights, lanterns, or utility lights. 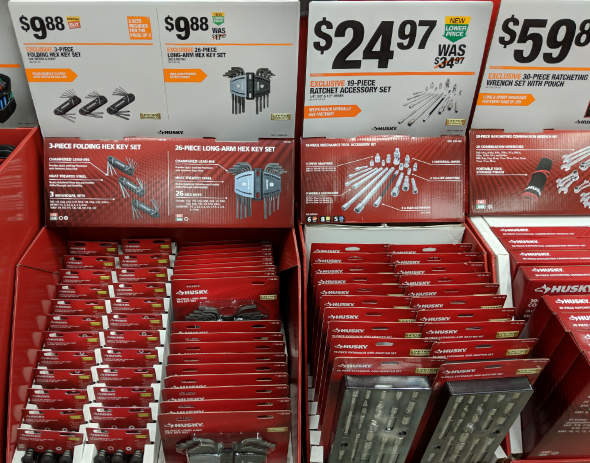 Husky hex keys, ratchet accessories, and ratcheting wrenches are all there again. I was planning on picking up the ratchet accessory set last year. I was waiting for it to drop in price, but it sold out right away near me. I might just shell out the $25 this time. 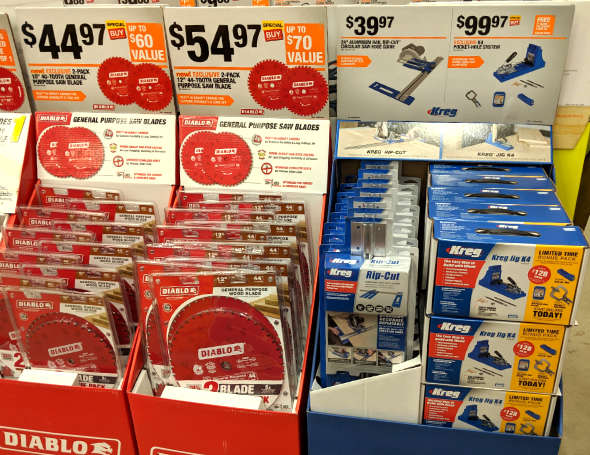 Finally, speaking of products that never get discounted and spend years up in the rafters, The Keg jig deal is back and it’s joined by the Rip-Cut. Around here, the Kreg jig is still around at the end of the season for the same price it started at, and maybe only one or two are gone from the display.

Stuart’s Note: Some of the deals and displays are restocked throughout the season, but the Kreg jigs didn’t seem to sell well at my local stores either.

One Last Bit of Advice 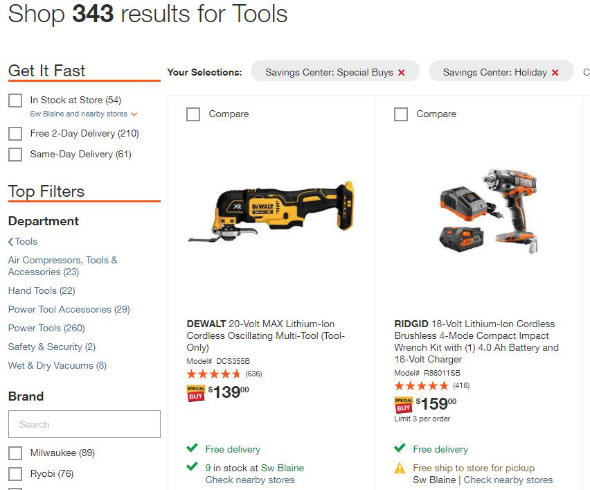 Following is a link that should take you to all of Home Depot’s holiday special buys. On Home Depot’s left sidebar, there’s see a check box that filters according to “In Stock at Store.” If you first select your store and then click that checkbox it should show you the Special Buys at a specific location. Not all of the in-store deals are listed there (yet?).