ToolGuyd > Power Tools > Cordless > Hot Deal: Dewalt 12V 4-Tool Combo Kit for $229!
If you buy something through our links, ToolGuyd might earn an affiliate commission. 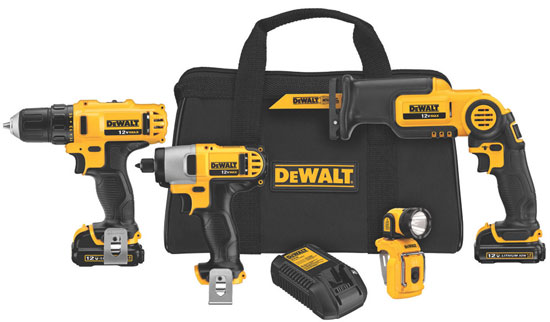 Tomas wrote in to ask us about a seemingly good deal he found on this Dewalt 12V Max 4-tool combo kit. Surely there was a catch somewhere, right? How could it be that this drill, impact driver, saw, and LED worklight combo costs just $229?

To judge the deal out I browsed around to check out how much the drill/driver and impact driver combo kit costs these days. $179 via Amazon ($199 elsewhere). The kit comes with 2 batteries, a charger, and kit back. And the LED worklight? $29 via Amazon ($39 elsewhere).

So we’re now at $208 for the 2-tool combo and LED worklight, meaning stepping up to the 4-tool kit costs just $21 extra. Another way to look at it is to consider that you’re paying for half the saw and getting the LED worklight for free.

Or you could look at the drill and reciprocating saw kit, which is priced at $200 via Amazon and other distributors. The 4-tool kit is $30 more and comes with an added impact driver and LED worklight.

Quite simply, the 4-tool combo kit is a great deal if you were going to buy the drill/driver, impact driver, and saw anyways. There are other 2-tool kits that might be better for your needs.

Update: Thanks to Clayton for his comment that mentions coupon code SCORE10 drops an extra 10%-off at Acme Tools, and jkrl for telling us about the less-expensive 3-tool combo at Home Depot for those who don’t want or need the LED worklight.

Thanks Tomas, for the heads-up!

If anyone can figure out why Acme is selling the combo for $50 less than everyone else, please let us know! My thoughts are that they overbought this combo for the holidays and just want to move inventory to make room for new releases.