ToolGuyd > Hand Tools > Knives > How Do You Dispose of Dull Utility Knife Blades?
If you buy something through our links, ToolGuyd might earn an affiliate commission. 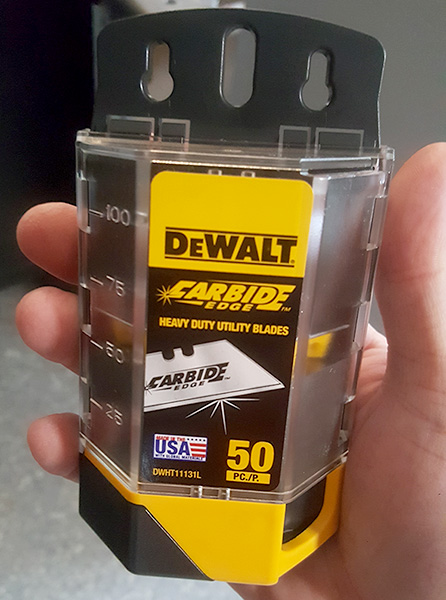 How do you dispose of your dull, worn, broken, or otherwise to-be-discarded utility knife blades?

I usually tape them in plastic or cardboard, or shield them in some other manner, and throw them away. Well, that’s what I used to do.

I recently picked up a 50 pack of Dewalt Carbide Edge utility knife blades, and with my first blade change I’m already appreciating the disposal storage compartment.

There’s a slot in the top that quickly accepts spent utility knife blades. And unless you jostle the dispenser a certain way, disposed-of blades aren’t likely to come out on their own. There are handy keyhole slots for mounting it vertically to a wall or other such surface.

Off-topic but related, I actually picked up 2 of the Dewalt Carbide Edge utility knife 50-count packs. One is made in the USA, and another was “new old stock” at a different Home Depot location, with the blades made in England.

Hmm, now I kind of regret it – a pack of 50 Stanley Carbide Edge blades are lower priced on Amazon than what I paid. Are they the same exact product? Possibly. Probably? Out of curiosity I’ll be doing some testing with made in USA Dewalt blades, made in England Dewalt blades, and a small pack of Stanley blades.

Dewalt, Stanley, and Milwaukee, and a number of other brands all offer convenient dispensers that also offer a safe place to deposit spent blades. That’s what I plan to use from now on. I’ll mount my new dispenser to the workshop wall.

There are blade disposal containers you could buy, and also various DIY ways to create blade dispensers out of everyday containers.

It’s something I’ve been meaning to do for a while, but I haven’t been going through utility knife blades often enough to really stop and deal with it. With each blade change, it was “oh, maybe next time I’ll make a quick disposal container.” But I kept postponing it.

This 50-count blade pack by itself will likely last me at least a year. Whether you go through 10 blades a day, or 1 blade a week, how many blades do you buy at once? Probably not a year’s worth. And that’s why it’s taken me so long to pick up one of these bulk dispenser packs.

Dual-purpose blade dispensers have been around for a long time, and a lot of people know about them. But there are still lots of folks who don’t know of them, and plenty others who can’t justify buying 50, 75, or 100 blades at a time.

So that brings me back to my question – How do you dispose of your dull utility knife blades?