ToolGuyd > Hand Tools > Electrical Tools > How Often do Light Switches Fail?
If you buy something through our links, ToolGuyd might earn an affiliate commission. 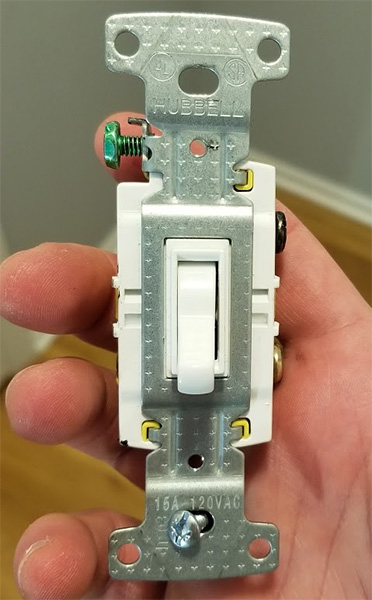 A new electrician came over for a service call today, to change a couple of outlets and switches that were too challenging for me to tackle myself (at least not without driving myself nuts). For instance, previously switched outlets, and one still switched, were a mess.

Once things were finished, I flipped the breaker back on, and the lights didn’t turn on. One of our fancy modern Lutron switches was non-functional, right out of the box. I wonder if the rattling noise had something to do with it. I had another on-hand (thank you, Home Depot!), and it worked perfectly.

While he was there, I showed off the broken Hubbell switch I had to replace about 2 weeks ago.

At the time, my wife woke me up, and told me that she couldn’t turn the bathroom light off. The bathrooms were remodeled 2 years ago, with 4 switches controlling 3 recessed lights and 1 fan.

Maybe it was in an intermediate position somehow?

It could be worse. When I was a kid, we moved to a new house, and somehow my bedroom light switch tripped a circuit breaker in the basement. My parents had that fixed fast, but I vaguely remember having a nightmare or two when I tried to turn the lights on in the dark but nothing happened. Or was that real?

Or, it could have been like an episode of King of the Hill, where Hank, in trying to thwart the sale of his house, rigged a light switch to operate a microwave and other kitchen appliances.

So, how normal is it for light switches to fail, let alone in 2 years? Maybe this was a low-grade Hubbell, and we’ll see some more failures? I hope now.

Do you guys have any recommended light switches? We replaced this with a Leviton “Preferred” switch, which is a slight upgrade over the basic ones, and it definitely feels more solid, too.

How to Hold Big-Loop Electrician’s Scissors