ToolGuyd > Power Tools > Cordless > How will Dewalt Respond to Milwaukee One-Key “Tool Control” Capabilities?
If you buy something through our links, ToolGuyd might earn an affiliate commission. 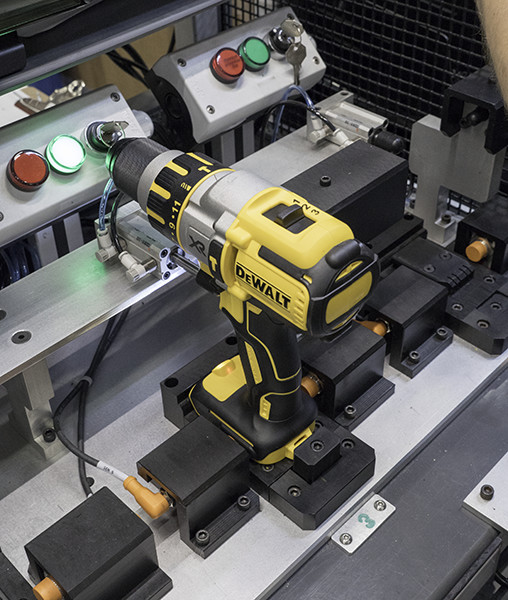 Today is the day that Milwaukee One Key was revealed to the tool world, and everything changed. Or not. How will Dewalt respond?

Milwaukee’s One Key smart tool tech offers much more functionality, such as the ability to essentially reprogram your tools.

Did you know what Dewalt’s brushless tools are programmed through the battery interface? It’s true – check out the photo above, which I took at Dewalt’s recent media event. The event was held at their Charlotte, NC factory, where one of the activities was to “build” our own 20V Max brushless hammer drills.

After the Dewalt brushless drill’s components are assembled, and the housing is fastened together, they’re programmed and then tested.

If Dewalt product managers and engineers haven’t yet caught wind of Milwaukee One-Key, and how One-Key M18 Fuel drills and impact tools will essentially allow for user customizations and programmability, I’m sure they’re going to be talking a lot about it today and tomorrow.

If I were an engineer or product manager at Dewalt, I would be asking two questions right about now. 1) Is this functionality that our users want or need? 2) Can we offer similar functionality? 3) Can we offer users something even better?

Do you know what would be better than Milwaukee’s One-Key tool control? The ability to reprogram the Dewalt brushless tools that users already own. Maybe it’s possible, maybe it’s not. All I’m saying is that, if at Dewalt, this is the angle I’d look at first.

Here is a list of most (if not all) of Dewalt’s 20V Max brushless fastening tools:

That’s a lot of tools. It might not be possible, but wouldn’t it be great if Dewalt’s new 20V Max Bluetooth battery packs could allow for some level of tool customizations. After all, the tools are programmed via the battery interface! Maybe tools would require an initial reprogramming at a service center in order to allow for user customizations?Just an idea.

This is a theoretical discussion about how Dewalt could potentially respond to Milwaukee’s One-Key tech, or at least how I am hoping they respond. After thinking about it for a bit, I’m still uncertain as to whether reprogramming Dewalt 20V Max brushless tools through their battery interfaces would be possible. Maybe the programming is locked in, and there’s no way to reflash the tools as they have been engineered.

Still, maybe revisions of Dewalt’s fastening tools will allow for user customizations through the Bluetooth batteries as a connection interface. That’s more possible than expecting Dewalt’s current tools to allow for the level of communication and programming that we’re talking about, right?

Or maybe Dewalt determines that this is something their users don’t want and will never want. That’s a strong possibility. Look at Dewalt’s brushless tool offerings. Until now, Dewalt have focused their brushless motor efforts solely on fastening tools – drills, drivers, wrenches, and nailers – unlike Milwaukee, which has expanded their brushless offerings into saws and grinders, tools where greater power, efficiency, and runtime are definitely welcome.

I would love to be a fly on the wall at Dewalt offices this week.

Do you think Dewalt will seek to match or best Milwaukee’s One-Key capabilities, and if so, how?