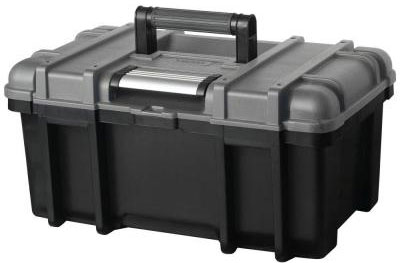 Husky’s new 22″ plastic tool box has a wider body than most others I’ve seen, making it great for bulky items and even power tools. It features a one-handed latch, a comfortable rubberized handle, and a removable plastic tool tray.

I’m currently working on a group of tool box reviews, and so I brought the Husky along to my parents’ house, hoping for a second opinion. After checking them all out, my father pointed to the Husky, declaring it his favorite. A little while later, he even asked me to buy him one.

Okay, so my father  likes the tool box, and wants one for his hand or garden tools. No big deal, right? Wrong, it’s a huge deal. My father very rarely asks me to buy something for him. The last thing he asked for was a LensMate filter adapter for his Canon SX camera, and that was almost 19 months ago. This video will show you why he likes the design so much:

If anyone has any questions about what it can and cannot hold, don’t hesitate to ask. It holds cordless tools no problem, with the exception of circular saws unless you leave out the plastic tray.

In all, this is a very nice box that is hard to find fault with. It is very well designed, inside and out. That it requires one hand to open and not just one-touch is a minor gripe. The latches on this box are a leap ahead compared to other tool boxes in the Husky’s price range.

If you’re looking for a new tool box, be sure to check out the Husky in-store. I still have not made up my mind as to whether it’s my favorite of all the new models that just came out, but it’s definitely high up there. I also cannot say whether it will hold up to professional use, but it definitely feels to be robust enough for heavy DIY use.

The Husky 22″ tool box can be purchased from Home Depot for $25. Note that right now it looks to be an in-store-only item. It appears that Keter is the OEM, so we might eventually see other brand names on the same tool box.

The sample featured in this review was purchased at retail.