ToolGuyd > Storage & Organization > Husky 46″ Mobile Workbench
Happy New Year!
If you buy something through our links, ToolGuyd might earn an affiliate commission. 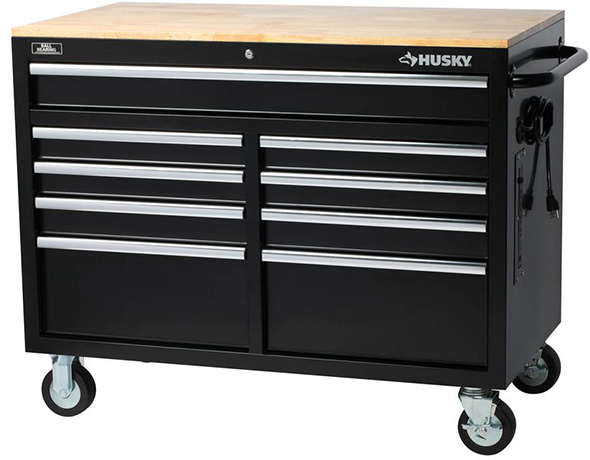 As part of our paid partnership with Home Depot, they send over a varied selection of tools to review each quarter.

When this quarter’s tools were revealed to me, I was excited, and then hesitant. They were sending me a Husky 46″ mobile workbench! But… I currently don’t have room for any new tool storage products, even to keep around for a short time to review. When I brought it up, it was too late to intercept the shipment, which arrived a few weeks later.

You get 2 keys for the lock, and a full set of precut drawer liners.

This unit retails for $398, which I’d say is a very good price for what you get.

I received a call from the truck, telling me the delivery was about 30 minutes out. Uh-oh. I was expecting something else that week, and had *just enough* space for one delivery. There was no easy way for me to accommodate testing of this unit.

Just after the delivery truck pulled away, my electrician pulled up in the drive. We had an appointment for a service call to change out some devices that were too challenging for me to handle (such as a previously switched receptacle with unconnected grounds).

“Could you use this? No strings attached, but I’ll ask for your feedback.” He thought it over, and called his partner. About two hours later, “okay, we’ll give it a shot.”

They mentioned having been on the lookout for a new way to store circuit breakers and other bulky supplies. The drawers looked like they could do the job, and they were convinced enough that they were willing to give it a try.

After a dozen “thank you’s,” his partner came by and I helped them load the Husky mobile workbench into the second van.

I asked them to send me a photo if they could, once everything was setup. 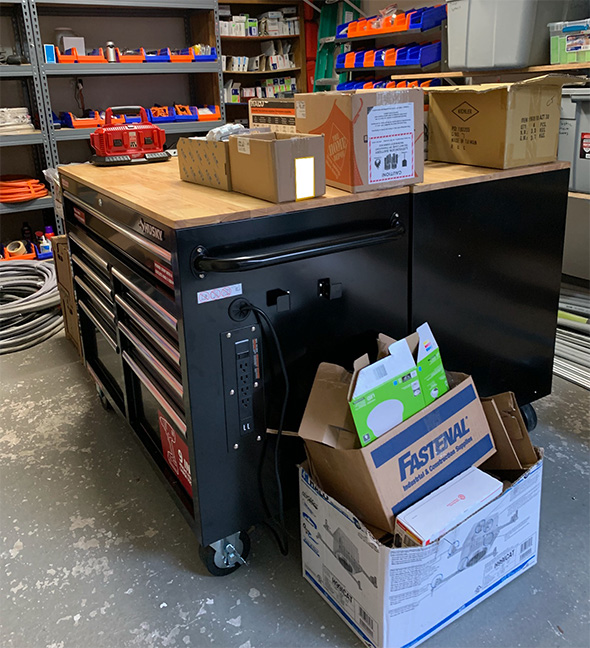 They liked it so much – the storage capacity, the drawers, and the worktop, that they bought a second unit, and lined them up back to back.

That speaks volumes to me – that it worked out so well and they liked it so much that they bought another one.

Right now on Home Depot’s site, this Husky mobile workbench has 563 reviews, with a 4.7 out of 5 star average. 98% of the reviewers recommend this unit.

I’m a big fan of Husky tool storage products – from plastic hand boxes to large steel ball bearing combos – and it was a little tough to part with this unit before even unboxing it. But, I’m glad I was able to send it to a good home.

I’ll check back with the testers, to see how it holds up in time.

If you want your own, you can order it for in-store pickup, or home delivery. If you opt for home delivery, there’s a freight fee that could vary according to zip code. (For my zip, home delivery is $79.)