ToolGuyd > Power Tools > Cordless > I Love Milwaukee Heated Gear, and Their New Non-Heated Jacket Seems Really Tough
If you buy something through our links, ToolGuyd might earn an affiliate commission. 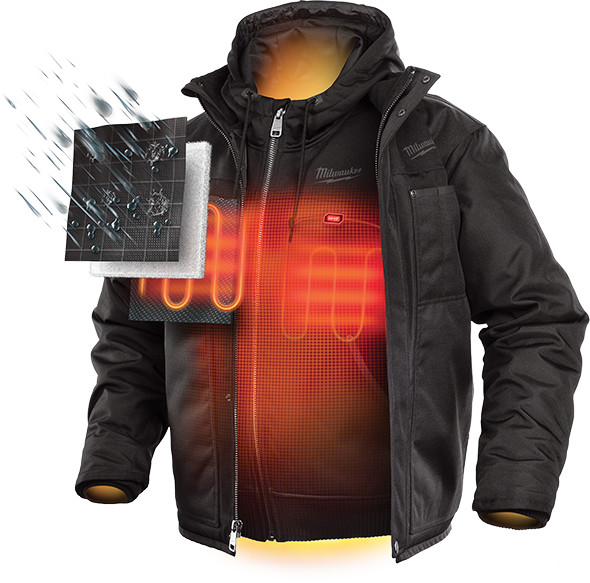 I’ve been wearing Milwaukee heated gear for a few years now. On the snowiest of days I still wear an old North Face jacket that’s in dire need of replacement, and on more in-and-out days I like a lighter jacket. But from October through maybe April, if I’ll be outdoors for more than a few minutes, I will more often than not have a Milwaukee label somewhere on my sweatshirt or jacket.

I keep charged batteries at the ready, but a lot of the time I don’t even need them – Milwaukee has done a great job creating lightweight but warm outerwear.

Today I tried on the new heated hooded sweatshirt for the first time. The battery pocket was a little noticeable-feeling, but I quickly forgot about it once I started moving about. I’ll have to load it with different size batteries to see if this is a constant annoyance. All I wore underneath the sweatshirt was a t-shirt.

I also noticed the perfect cuffs. They weren’t too loose, or too tight, they were just perfectly sized. This helps keep wind and water out (it’s raining today), and is also important when you’re working around power tools. You don’t want huge sleeves flapping in the wind where they could get caught and wrapped around a drill bit or worse.

Milwaukee says this about the latest generation of heated hoodie sweatshirts:

A fitted hood designed to be worn under a hard hat and a new integrated battery pocket increases user comfort when worn on the job.

A waffle weave thermal lining works together with M12™ heat technology to generate and keep head around the chest and back for up to 6 hours.

I’ll have to unpack last year’s heated hoodie – which I also loved very much – for comparison.

Milwaukee says that the new hoodies are drastically improved, and they very well might be, but last year’s hoodies, and the previous year’s, were darned good.

If you can find older generation hoodies at a discount, you’ll love ’em. If you want the latest and greatest, go for this year’s.

I haven’t yet unpacked the new heated jacket yet. Er… hold on a second.

OH, okay. It’s not a heated jacket, it’s an outer shell that pairs well with the sweatshirt. (I think.) Maybe that gives you get the 3-in-1 functionality shown above.

Nope. There’s no internal zipper or way to control the hoodie’s heated elements. So it’s just a non-heated outer jacket, but don’t take that “just” part the wrong way.

I was extremely surprised by the feel of the outer shell. It’s a little stiff, feeling both tough and weather resistant. It feels like what a super-premium tool bag might feel like. It was a little baggy in the chest areas, and a tiny bit loose in the sleeves. This makes sense, as it’s meant to pair with a regular hooded sweatshirt to create a warm and very durable combo. Or maybe a heated sweatshirt, if you don’t care about having access to the heating controls after you zip up.

The new GridIron outer jacket shell felt like the toughest material in my closet, except for maybe whatever my work boots are made out of.

My North Face is a 3-in-1, and I love it dearly. Last year my winter outerwear choices were a North Face lightweight Thermoball mini bubble jacket, my North Face 3-in-1 jacket, and Milwaukee heated jacket.

The new North Face 3-in-1’s that come with semi-Thermoball inner jackets aren’t as fully insulated as the standalone Thermoball jackets. I have worn my North Face 3-in-1 as separate components, but not for a while. I bought that jacket more than a decade ago, and have since picked up some very nice lightweight jackets when outdoors conditions don’t call for ultimate warmth.

I ended up wearing the Thermoball as often as I could, because of how lightweight and packable it was. Prior to my son entering daycare, I took him in and out of a lot of places, and a heavy jacket would have been more cumbersome than anything else.

With bulkiness in mind, I have never found Milwaukee’s jackets to be heavy or bulky. I suppose they lacked a certain level of durability that some users might want. I don’t think anyone will be able to complain about the GridIron material found in Milwaukee’s hooded jacket and 3-in-1 jacket.

After looking up the details for the hooded jacket, 252B, I didn’t see any mention of pairing it with a heated hoodie. There’s also only one set of zippers, with no way to pair the hooded sweatshirt to the outer jacket shell. This isn’t quite the same as what you get if you buy the 3-in-1 combo, 251B.

The 3-in-1 seems like a great choice if you’ll be outside for long stretches of time. A regular hoodie or good base layer would pair well with the new hooded jacket, for those who don’t want to mess around with battery packs. The heated jackets are an all around good choice, except for maybe workers who HAVE to be outside in the worst and harshest weather. For such users, the 3-in-1 would probably also be the best choice.

This post somewhat spiraled out of control. I’ll have more detailed posts on the new heated gear once I sort through the finer details and have worn them all a bit more.

Rather than go back and smooth out the post, I left it as-is, to serve as a reminder that not all Milwaukee jackets are heated. When I first opened up the jacket, I was confused as to why there was no M12 power port, or a place to put it.

I also escaped my main point, about how I really like Milwaukee’s heated gear. I’m going to go dig out the heated jacket sample from last year. Not that I’ll need it yet – this heated hoodie will likely keep me warm until winter officially hits.

It’s a little confusing, even for me, to sort out the differences between each year’s heated offerings. But one thing I do know is this – you can’t go wrong, whatever you choose.