ToolGuyd > Editorial > I Never Took a Shop or Woodworking Class, But…
If you buy something through our links, ToolGuyd might earn an affiliate commission. 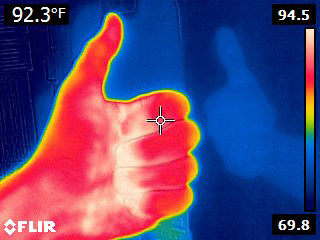 In yesterday’s post about tape measures, I mentioned that I never took a shop class, a woodworking class, or anything of the like. Well, that’s not exactly true. There were plenty of tool exposure outside the house, it just took me some time to remember.

When I was a kid, our summer camp had arts and crafts, and also a woodworking activity that one of my uncles taught. We made stepstools and knock hockey boards. I don’t remember everything, but there was definitely gluing, hand and machine sanding, and shellac involved. I still have those step stools – somewhere. Maybe it was for the knock hockey boards, but I remember using a small hammer.

I also remember that uncle working on several projects. He made acrylic candy dishes for my cousin’s wedding (engagement party?), using a large oven to soften up the sheets before pressing them into shape with a mold. I also remember some woodburning projects. There was also string art, spin art, and things like that.

A comment today, about sheet metal, reminded of high school.

I took a couple of tech and engineering classes, and was also in the robotics competition club. In the club, we worked on different things, and I remember breaking a large drill bit.

I don’t remember what was done in which class, but there are 3 notable group projects that I fondly remember. It took some time, but things came back to me.

First, we made planters out of large vegetable cans. We went to the cafeteria, gathered up the industrial-sized cans, and processed them. We cleaned them out, and cut them to pieces. The bottom half of the cans were used for the planters. We must have rolled the edges over for safety. The top parts were cut into strips.

We used huge stomp-brakes to cut the metal strips, hammered them into curved shapes, and spot-welded them to the cans to complete the planters. I think we sold them to parents at a fair afterwards, or maybe we donated them? I don’t remember.

We were grouped into pairs of 2 and tasked with reforming a 2×4 to make it stronger. The best-looking 2×4 of the bunch was reserved as the standard, and we then took turns picking 2x4s from what the teacher bought for the class. I believe we were towards the very last of the selection process, getting stuck with one of the knottier one.

My partner and I decided to create an I-beam. I think I partnered with a “Chris,” and I can remember his character quite well. He was very fun and easy going. I also remember that he once got in trouble for sticking a fork into an electrical outlet.

If I can remember correctly, we ripped the 2×4 into 4 pieces. 2 pieces were to be the top and bottom, and 2 for the middle. We laminated the vertical part of the beam from the 2 pieces, thinking that the varied grain structure would give the beam added strength. Then the top and bottom were glued on.

I don’t remember the ratios, but we tried to be exact about how thick everything would eventually be.

We used plenty of clamps, and a lot of glue. No other fasteners were permitted. I think the only tool we used was a large stationary band saw.

After everyone’s reformed beams were done, it was time to test them. The teacher braced one end under the reinforced ledge of a secondary door in the room. We could never figure out where it went – maybe some kind of service corridor?

A stack of books (maybe it was something else, but I remember books) was placed under the beam at the center. And us students were the weights at the opposite end of the beam.

I remember the standard 2×4 breaking at 1300-something pounds of “us.” Our beam? It ripped apart at the middle at 1800-something pounds. Ours turned out to be the strongest (yay!). We had to raise the center a little more, add more students for the weight, and there might have been a bounce or two.

Our beam didn’t crack at a glue joint, it didn’t break at a knot. It was the wood itself that failed, and somewhat spectacularly so.

I don’t remember much about our ball maze, other than using a drill press and hole saw to cut some shapes. Hmm, or was that to create forms to shape the legs of our planter against?

While I might sometimes remark about wishing I had the opportunity to take a woodworking class, or a shop class, I did have some exposure to tools. Maybe it wasn’t anywhere near what I would have learned 50 years prior, but I have fond memories of the opportunities I did have. It just took a few sparks to bring those memories back to the surface.

What are your high school (or earlier) “shop” experiences like?