ToolGuyd > Hand Tools > Precision Tools > Ooh, an Irwin Hanson 117pc Tap and Die Set!
If you buy something through our links, ToolGuyd might earn an affiliate commission. 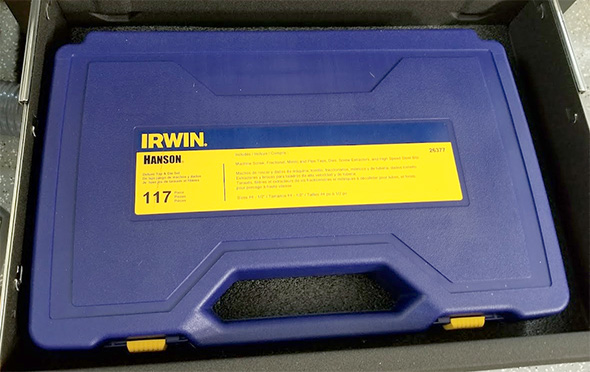 Out of the blue, one of my Stanley Black & Decker contacts offered to send me an Irwin Hanson 117pc tap and die set to review (model 26377). Yes, please!

Years ago, I bought some individual taps and tap drills in the sizes I needed. I also bought Kobalt sets, for cheap. The Kobalt sets were… less than I would have liked. I looked at Craftsman sets. The consensus online was that they quality was so-so.

I kept looking at the Irwin Hanson 24606 set, currently $90 at Amazon. It’s a 41-piece set with a variety of taps, dies, tap and die handles, and a thread pitch gauge. “Too much for me” I thought.

Now, I have a wide range of taps, tap handles, a full set of drill bits, some spares, spiral taps, and I’ve even needed pipe taps. I don’t have many dies, though, as I add threads to holes much more than I need to thread shafts.

I pieced together a nice selection of tools for myself.

But every so often, I need a size, tool, or style that I don’t already have in my box, forcing me to order what I need, and put things on hold until it arrives. 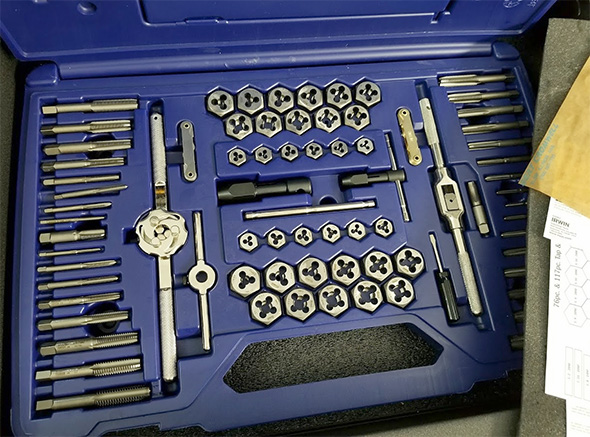 With a set like this, you have a wide range of taps, dies, and accessories, before you think you need it.

I went the “buy as I go” route because my needs started small and grew over time.

I’m glad that Irwin was eager to get this set in my hands, and I know that it will come in handy in coming weeks and months. Will it handle all of my tapping and threading needs? No. But that’s because of the projects I like to work on. I do more thread-cutting, rather than thread repairing.

Irwin says this about their tap and die tools:

IRWIN prides itself on working with a variety of tradesmen to solve endless fastening challenges: IRWIN® HANSON® Tap & Dies are the answer. Whether creating new tools from raw steel or repairing damaged and worn threads, a precise fit is essential. IRWIN Industrial Tools® sets the standard for delivering quality every step of the way in threading applications.

As I mentioned, we understand you cannot guarantee editorial coverage, but we would love for your publication to be aware of this trusted product from the IRWIN line.

I left that last part in, because it was mentioned a few times.

I’ve been aware of Irwin Hanson’s tap and die products for a while. I think I also have samples of their modular kit around here somewhere.

Hanson has a very good reputation.

The taps and dies included in the 117pc set sent to me? Made in the USA. 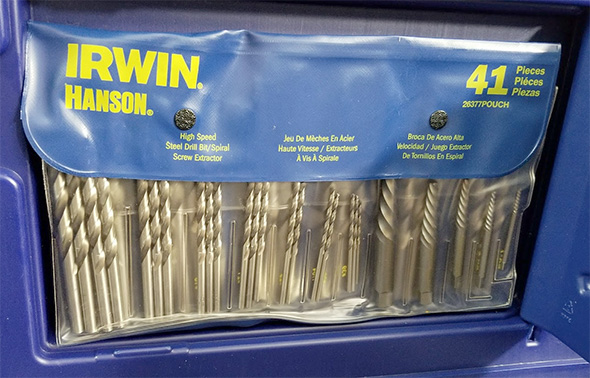 There’s a 41pc drill bit and screw extractor set stored behind a panel in the top lid area.

When it comes to taps, I use taper, plug, and bottoming taps often. That’s to create new threads. Sometimes I use spiral taps for through-holes or in 80/20 extrusions. This set comes with plug taps, the most commonly used style for many threading and repair tasks.

I’m pretty stoked here. I’ve been curious about Hanson taps and dies for a while, but never quite brought myself to buy a set. I’ll be testing them out on upcoming projects to see how well I like them. So far, I’m optimistic, as Hanson has a solid reputation.

My only concern would be that the tools are made from high carbon steel (the drills are high speed steel), but I don’t think that’s going to be an issue. For thread repairing, or hand-tapping a few holes here and there, high carbon steel should be fine. If I know an upcoming project will require 20 holes in thick aluminum or steel, I’ll order what I need in advance, from an industrial supplier.

This set is widely available. It looks like it could be a good option for tradesmen who need to repair or create new threads at a moment’s notice.

Thank you to Irwin for the review sample!

What’s the Difference Between Calipers and Micrometers