ToolGuyd > New Tools > Irwin Mobile Command Center Wheeled Tool Box
If you buy something through our links, ToolGuyd might earn an affiliate commission. 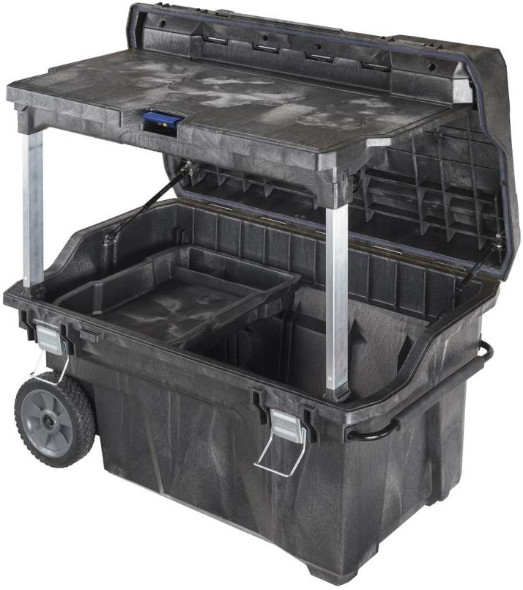 I finally spotted this Irwin Mobile Command Center wheeled toolbox at Lowes, after seeing several posts about it on various social media outlets. What really sparked my interest was the fold-out table — who doesn’t need as much table space as they can get while working?

This 48 gallon box is 40.5″ wide, 25″ deep, and 24″ high. It’s is made from structural foam, the same stuff Dewalt uses to make their tough system boxes. I have to admit I wasn’t really familiar with structural foam, so I had to do a little digging.

Rather than just use straight plastic, gas is injected into molten plastic resin, and the resulting foam fills all the voids in the mold. Wherever the foam touches the mold, the air bubbles collapse, leaving a smooth shell. The structure the foam leaves behind inside the walls increases the rigidity while decreasing the weigh of the part.

To set up the table, you open the lid and pull the latch located in the center by the hinge. Then you pull the table out and up until it is level. Next, you lift the support legs up until they are under the front edge of the table. Finally, you match up the notches on the table with the tabs on the legs to make sure the legs lock in place. 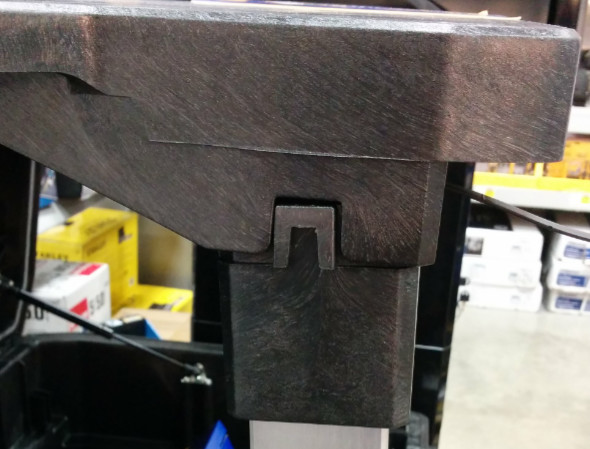 Here’s a closeup of the leg-retaining notches. 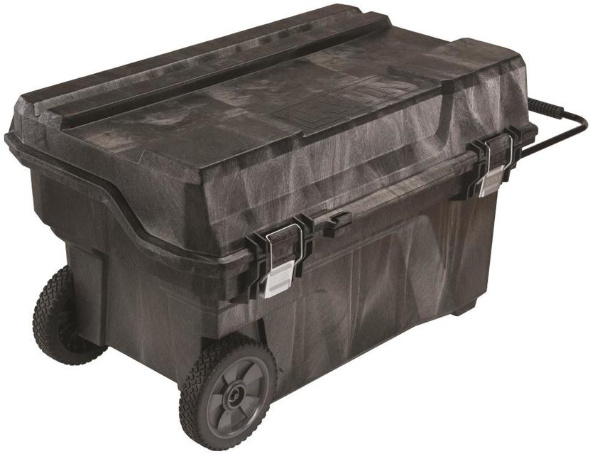 When the table is folded away and the lid closed and secure with the two steel latches. you can extend the retractable handle and pull the toolbox around on its two 9″ wheels. 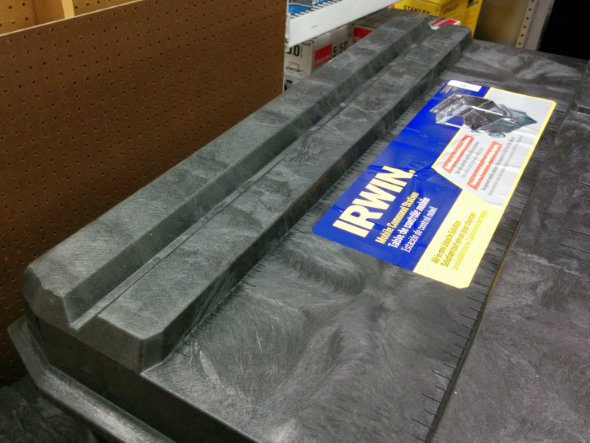 On the top, you can see a V-groove for holding round objects, and a recessed area that Irwin says is for holding lumber while you cut it. 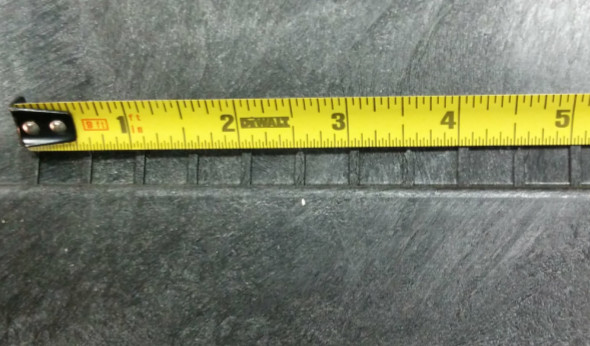 A close up of the hash marks in the “cutting channel” reveals that they are spaced in 1/2″ intervals, in case you need to do a quick measurement and can’t find a tape measure anywhere. 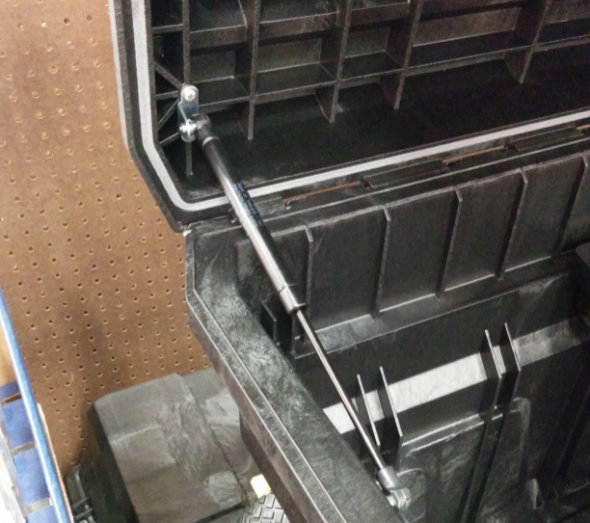 Opening up the lid again, you can see the seal around the top that provides the IP54 water and dust resistance. You can also see one of the two struts that hold the lid open. 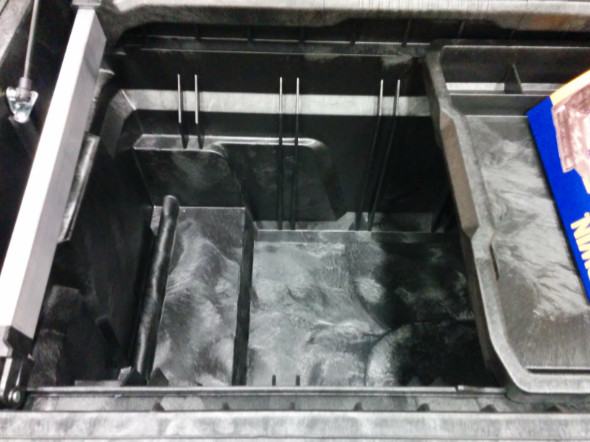 Inside the box, you can see the structural ribbing. This ribbing might be able to hold 3/4″ plywood dividers to further organize the inside storage compartment. You can just see the removable storage tray to the right in the above photo. 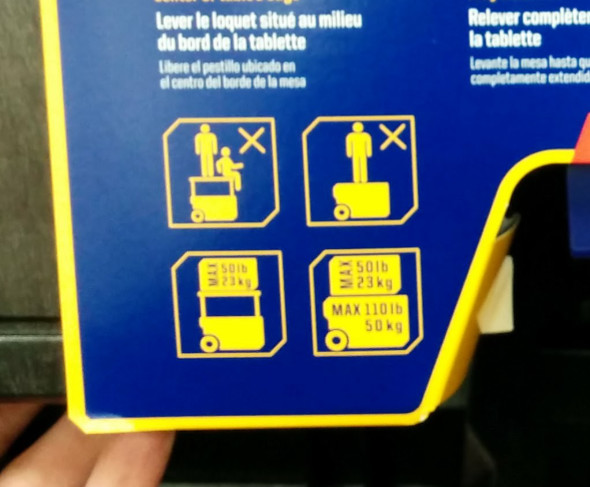 Finally, how much weight can this rolling toolbox take? The above blurry packaging seems to say that the toolbox can hold a maximum of 110 lbs. while the table can support up to 50 lbs. 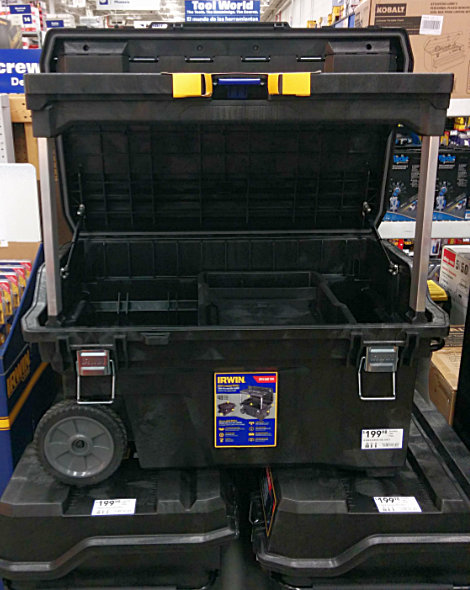 It looks like the Irwin Mobile Command Center is a Lowe’s exclusive for now. It’s available through the website for $200 and I’ve seen it on display in some Lowe’s retail stores for the same price.

Stuart’s Note: My store is reporting 2 in-stock, but I didn’t see any when I made a special trip there the other day. If you’d be upset leaving empty-handed, order online or call your store first to confirm their inventory.

This one large box gives you more than 2x the storage capacity of either the Milwaukee Packout or Dewalt ToughSystem 3 piece combos. It’s the same price as the Packout special buy — of course for that price Irwin also gives you a built-in worktable. This box gives you one big unstructured space, versus 3 smaller toolboxes. It all depends on what kind of storage you are looking for.

I mentioned the structural ribs above, but they may be one way you could organize such a large volume more effectively. It sure looks like they are meant for accepting dividers — otherwise why design them in pairs like that?

The one thing that makes me pause is the weight rating. It sure seems like it would be easy to pile in way more than 110 lbs of tools in such a large space. Plus the 50 pound rating on the table seems a bit low. You might not put 50 lbs of stuff on it, but what if you lean on it while working. You could accidentally put half your weight onto it without trying.