ToolGuyd > Hand Tools > Pliers > Irwin Vise-Grip Launches New Line of Premium-Styled Pliers That are Made in Taiwan
If you buy something through our links, ToolGuyd might earn an affiliate commission. 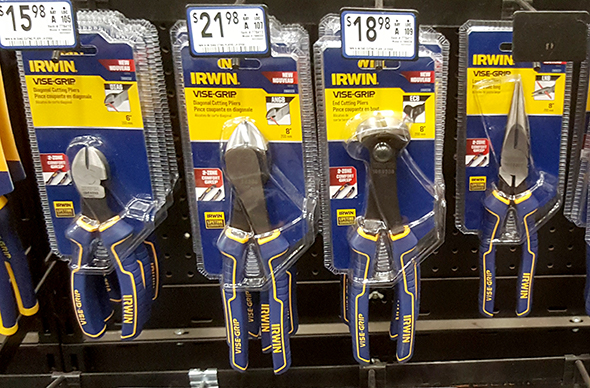 I recently noticed that Irwin has come out with a new line of pliers and cutters.

I was at a Lowes store, and at first I thought that they had incredibly good pricing on Irwin’s NWS-made pliers. Well, I was wrong. These were actually all-new pliers.

These new pliers look a lot like Irwin’s NWS-made pliers, but there are some significant differences. Most importantly, the new pliers are made in Taiwan. There was one style of NWS-made Irwin pliers remaining on the shelf, and they’re still made in Germany.

I’m a HUGE fan of NWS pliers, and of the tools born from Irwin’s collaboration with NWS to produce Irwin Vise-Grip-branded premium pliers and cutters.

Sorry, back to the point.

From what I can tell, this is a new line that will be sold alongside the NWS-made pliers. There’s no indication that the NWS-made Irwin Vise-Grip pliers, which I am a HUGE fan of, are being discontinued.

I do recall a few mentions of others finding the NWS-made pliers on clearance at some Lowes stores.

It makes sense to me that Irwin would want a less expensive line of pliers. After all, that’s probably what more shoppers are looking for. Does the average Lowes shopper want premium made-in-Germany pliers? Or do they want reasonable quality pliers that are less expensive, more affordable, and more competitive with the other options put in front of them.

Lowes and Irwin seem to have been exploring a deeper partnership lately, with these new pliers likely being a small part of that Irwin tool expansion. I have also seen new Irwin screwdrivers at Lowes, and they’re actually pretty enticing.

Irwin co-developed the handle styling of their NWS-made Vise-Grip pliers, which explains how or why they’re able to carry over similar styling to their new line of pliers.

I’m tempted to describe these new pliers as being NWS-styled, but it was never clear as to how much responsibility was shared between Irwin and NWS in designing Irwin’s handle grips. So I guess they’re Irwin/NWS partnership pliers-inspired designs?

Inspecting the different pliers from off the pegs, the sole NWS-made Irwin pliers and one of the new models, I could see some noticeable differences in the handle grips. 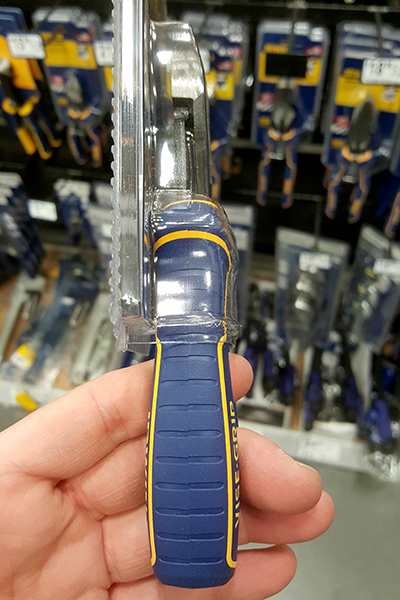 For one, while the handle quality is quite decent, it is clear that the NWS-made handle grips are better. There’s better alignment between the molded halves, and I found the NWS-made handle texture to feel better. Or, potentially better. It’s hard to talk about the “feel” of a tool without actually using it.

Since Irwin co-developed the handles with NWS, it would be wrong to describe these new pliers as copies or look-alikes. But that’s how I’m leaning towards feeling.

They’re extremely similar pliers, with subtle differences. The handle color is the biggest indicator that these are different pliers. The NWS made-in-Germany pliers have black or dark grey-colored handle sides, the made-in-Taiwan versions are blue.

The curvature of the handles is the other standout indicator, but it requires closer examination and might not be consistent across both product lines.

I’ll need to find a way to do side-by-side comparisons to see how the tools differ apart from just the handles.

Generally, if I don’t know anything about a tool, I prefer made in Taiwan vs. made in China. Fortunately I don’t often have to solely rely on such basic and occasionally unfair assumptions. I own some fantastic tools that were made in Taiwan, and also some great ones made in China.

If I were shopping for new pliers, I would pay a lot of attention to Irwin’s new lineup.

From what I could tell just by handling them at the store, the quality seemed to be a good step above entry-level. The prices were a little higher than average when considering general consumer interest, but I think that they’ll appeal to anyone who wants a step above Stanley or Kobalt quality.

It seems that the NWS-made versions will continue to be sold online, and I did see the Max-Leverage high-power diagonal cutters still on the shelf at Lowes. The situation will be a lot clearer in 6 months or so.

If it turns out that Irwin is replacing their NWS-made pliers with these, I will surely be disappointed, and it might even hurt my feelings towards the company.

I’m left wondering what the full story is. Was Irwin unhappy with sales volumes of their premium quality and premium-priced pliers, leading them to adapt the handle design to a new line of pliers made in Asia instead of Europe? Is NWS in any way tied to these new pliers? Did Irwin carryover the handle design with their cooperation, or did it lead to feelings of betrayal?

Anyways, if you’re near a Lowes, check out these new pliers – I’d be interested to hear what you think about them.

If the prices were a little lower, I would have bought a couple on the spot. As it is, I’ll likely watch your feedback and requests closely, to see how much interest there is for hands-on reviews.

That’s what I would consider USA-made pliers territory, close to what you’d find Channellock or Klein pliers selling for.

If there’s interest, I’ll buy a couple of these new Irwin Vise-Grip pliers, if only for review and comparison purposes. After that, maybe I’ll keep them in an auxiliary tool kit.

Update: All of the first 11 NWS-made pliers styles that Irwin launched are still available on Amazon, although some are lumped together as “options,” making it only look like there are fewer pliers styles now available.