ToolGuyd > New Tools > New Jet 13″ Helical-Style Benchtop Planer
If you buy something through our links, ToolGuyd might earn an affiliate commission. 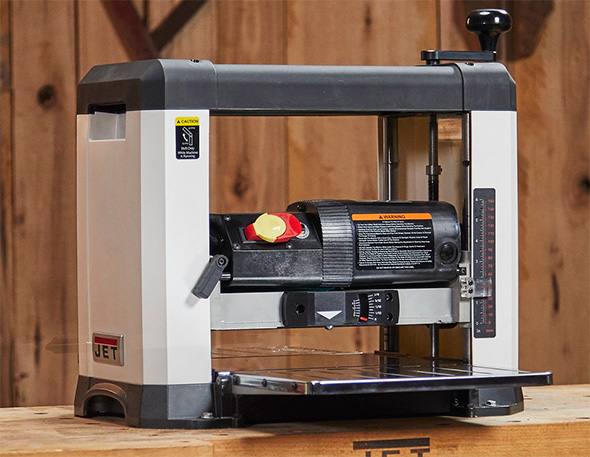 Jet has come out with a new 13″ helical-style benchtop planer (JWP-13BT), featuring 6 rows of individual cutters, 26 in total. Each quick-change knife insert can be rotated if damaged or worn, or replaced when needed.

Usually, helical-style and knife insert planer cutter heads provide a big advantage in that users don’t have to replace or sharpen entire knife blades if there’s a chip or other damage in just one spot. Helical-style planers are often quieter than machines with straight knife cutter heads. 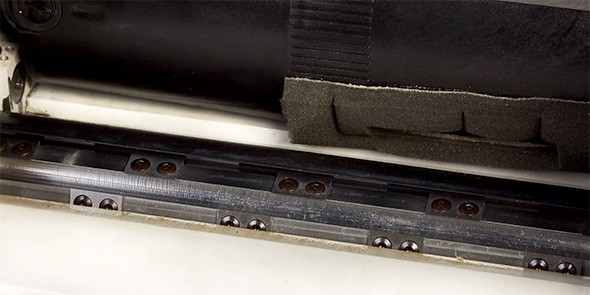 The Jet planer doesn’t look to have a true helical cutter head, but you should still see some advantages over straight knife blades. Jet’s cutter head has 6 rows of cutters that look to create two complete cutting passes. Instead of square inserts, Jet equips their cutter head with rectangular inserts, and each is fastened to the cutter head with two machine screws.

The knife inserts are made from high speed steel (HSS).

I would imagine that the shape and fastener configuration also ensure that the cutter inserts self-position themselves into perfect alignment.

There are other helical-style benchtop planers to consider:

There are also of course many planers with traditional double-edge knife cutters.

So why buy this Jet?

Well, looking at say the Rikon planer, that model also has 26 cutter inserts in 6 rows. However, they use square inserts. From the looks of the Rikon’s cutter head, the cutter head makes one pass per rotation. With this Jet, and its rectangular inserts, it makes two cutting passes per rotation of the cutter head.

10,000 RPM seems to be a common cutter head speed. This Jet has two feed settings, which is a feature other models might not share.

Frankly, I can’t tell you definitively that THIS is the planer to buy if you’re looking for a), b), and c). But, it does bring some different features to the table.

I’d be a little concerned about the availability of replacement HSS inserts. There are plenty of sources of double-edged 1/2″ cutter inserts, in both HSS and carbide styles. You could always rotate inserts if worn or damaged, and can move inserts around if need-be. If I were buying this planer, I’d simply plan on buying a couple of spare inserts at the same time, for peace of mind.

The price is a little higher than I would have expected, but Jet’s semi-annual promos might help with that.

It’s good to see new competition in this space. A lot of 13″ planers are different in name only, which makes Jet’s distinctions (most notably the rectangular inserts and 2 speed settings) stand out even more.

Jet emailed us emphasizing the importance of the cast iron table, which they say is not available on any other similar benchtop planer. Most other 13″ benchtop planers have cast aluminum or sheet metal tables. Jet says that their 4-post design and cast iron table makes their new planer extremely rigid, which reduces vibration and holds the precision of the cutterhead.