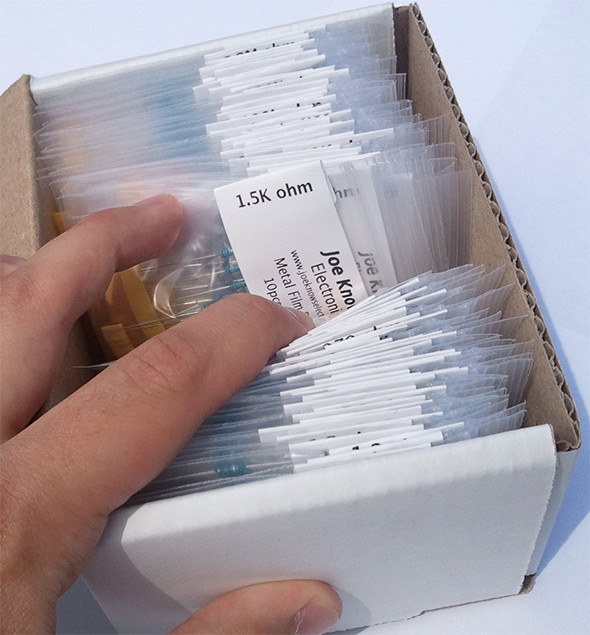 Years ago, I bought a resistor assortment from Radio Shack for my electronics prototyping projects. They came connected in strips, but weren’t labeled at all, so I had to read the color codes each time I needed a particular resistor. Eventually, I took them all off their paper strips and sorted them into a plastic organizer with 6 long compartments. Big mistake.

Let me tell you – it was a bother to pick out a resistor I needed, but I lived with it. I sorted the resistors into value ranges, but it was still a hassle.

A little over 2 years ago, it had become a huge time hog to pick out the resistors I needed for quick projects or temporary circuits. A HUGE time hog. I had also run out of or lost a bunch of sizes. I spent $20 on a Joe Knows Electronics 1/4 watt metal film resistor assortment, and was amazed at how much time it had saved me since then.

Before that, I had purchased a Joe Knows Electronics LED pack, and the LEDs were quite decent. Yes, there are quality LEDs and garbage LEDs. I have since taken to ordering my LEDs from component distributors as part of large orders, but I don’t think I would have heard of the resistor bundle if not for that LED purchase.

What the heck is a Resistor? Capacitor? LED? Check out our brief introduction to electronic components to find out!

This particular bundle, which has since dropped in price by $2, has 86 different resistor values, from 0 to 10M ohms, and 10 of each one. The resistors’ tolerance value is 1%, which is better than the 5% of my older Radio Shack ones.

I also have a Joe Knows Electronics capacitor bundle, and noticed that they also now have a $30 transistor and diode assortment kit. The resistor and capacitor bundles have been working out very well, although I might have been better off with the $24 1/2 watt resistor kit. Maybe not.

All this came to mind because of a recent Adafruit blog post pointing to an Instructable where someone described how to store resistors in little baggies in a small cardboard box. Do you know what’s even easier than sorting 86 pre-labeled resistor baggies into your own cardboard box? Just buying the whole shebang for less than $20.

So let’s go by that $0.025 price, assuming you’re able to group-buy a high quantity assortment with friends. So that’s $0.025 x 860 = $21.60. Plus the cost of baggies, time put into finding a fitting box, and the time it takes to label and sort everything. And plus shipping, which Mouser estimates would be $5 minimum for USPS or $8 for UPS or FedEx.

You know what? I’m feeling even better about my Joe Knows Electronics component assortments. The Joes assortments are less expensive on their site, but you have to pay shipping. On Amazon, shipping is free for Prime members, or non-Prime members as part of $35+ orders.

Digikey prices are similar – $0.10 for a single comparable 10 kΩ resistor, but they offer price breaks for lower bulk quantities. Still, you don’t see ~$0.025 per-component pricing until the 250+ quantity level.

I have seen other assortments over the years, but they typically come with large organizers, such as these plastic Akro-Mils organizers I previously posted about. The little Joe Knows Electronic cardboard boxes fit so much better on my workbench.

I started off by titling this review: “Joe Knows Electronics” Pre-Organized Component Assortments for the Lazy Electronics Hobbyist. But it’s not about being lazy, but efficient. Yes, I paid for an organized assortment I could have put together myself, but it would have cost me more to do so.

These assortments are also good picks for electronics and microcontroller beginners who might not know what resistor values they might need, although much smaller and less expensive assortments from elsewhere might be easier on their wallets.

I highly doubt that I will ever use every single one of those 86 resistor values, but I do use a fair number of different values quite regularly. Besides, one cannot run down to the local Radio Shack in the middle of a project or prototyping session anymore.

When it’s time to replenish those well-organized baggies with more resistors, I’ll add the needed sizes to my next Mouser, Digikey, or other electronics component supplier order. If the need is immediate, I could probably use two of the lesser-used sizes in series or parallel to achieve the value I need.

The kit I have isn’t as well-labeled as in the photo above, but still easy to rifle through. The 33-value capacitor assortment I ordered isn’t available on Amazon anymore. Although useful, I think the 86-value resistor assortment is more of a must-have product.