ToolGuyd > New Tools > Keter Trio Cantilever Organizer
If you buy something through our links, ToolGuyd might earn an affiliate commission. 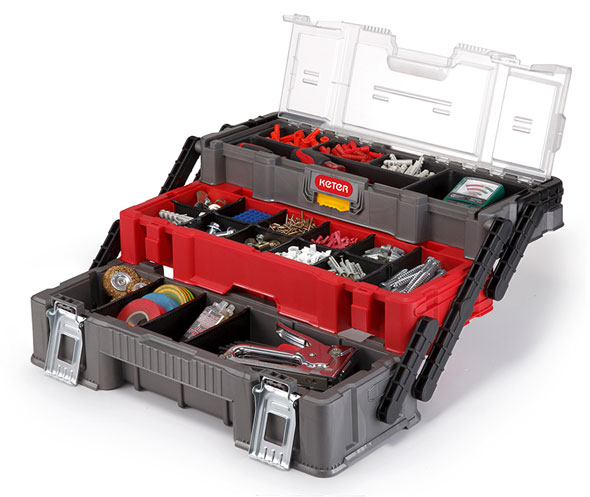 A while back I purchased a Keter 18″ cantilever organizer (~$30 via Amazon), and while not as heavy-duty as a metal cantilever toolbox, it’s made from strong and rigid plastic and is rather nicely built. I would have purchased a couple more, but Keter’s organizers tend to take up a lot of shelf space.

Apparently I’m not the only one wishing for a smaller organizer, as Keter has come out with the Trio, a 3-tiered cantilever organizer that has a very small footprint. The organizer, which can also be used as a compact toolbox, features three dividable levels.

The Keter Trio is a little different than their other cantilever organizers, as it is divided using customizable dividers instead of removable bins. But, like other Keter organizers, the Trio does have a long carrying handle for greater portability. A clear lid lets you peek in at the contents of the topmost level, and two metal latches securely holds everything together for storage or transport.

There are two downsides to the Keter Trio organizer. First, as with their other cantilever organizers and toolboxes, the Trio can only be spread open on a flat and stable surface. It has rear support legs that help to keep the upper levels from tipping everything over. 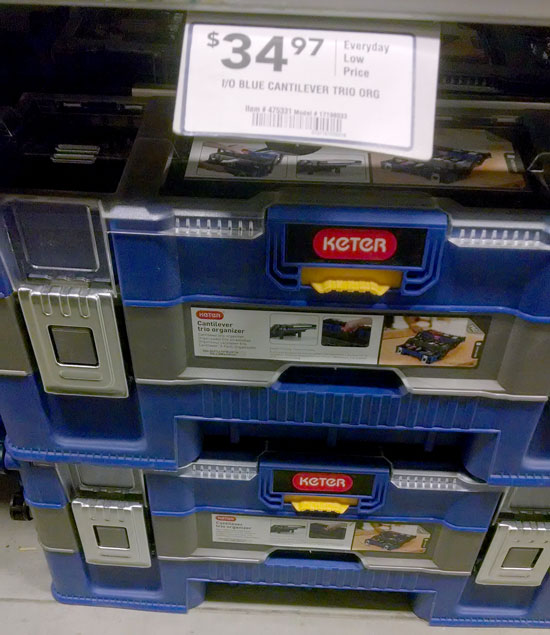 Second, these cantilever organizers seem to be very hard to find. I spotted them at a local Lowes (item# 475331) a few months back for $35 each, and have never seen them there or anywhere else since.