ToolGuyd > Hand Tools > Mechanics' Tools > Kirk Wrench – a Reconfigurable Modular Wrench for Tight Spaces
If you buy something through our links, ToolGuyd might earn an affiliate commission.

It’s not very often you run across a completely unfamiliar type of hand tool, but that’s what happened when I stopped by the Kirk Wrench booth in the Inventors Spotlight section of the National Hardware Show. The exhibitors in that area are typically brand new companies showing first-time products. 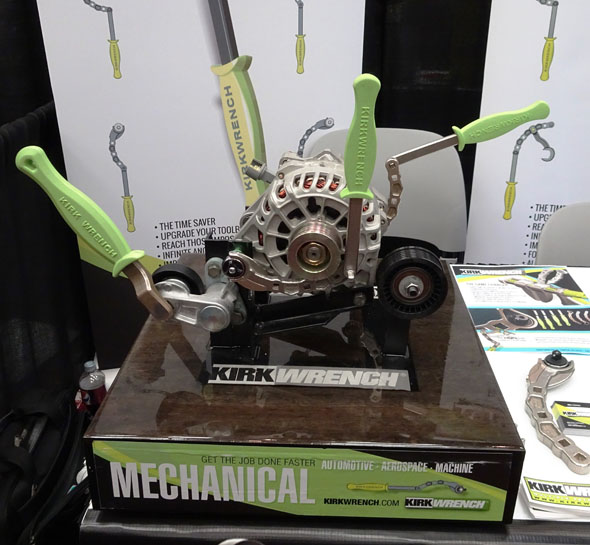 That definitely describes the Kirk Wrench, an ingenious drive system for reaching nuts and bolts that would otherwise be difficult or impossible to get at with standard wrenches and ratchets (as shown in the demo video below). 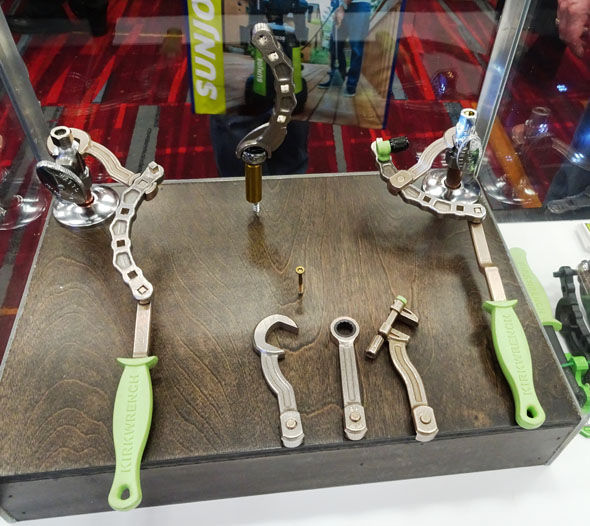 There are different attachments for reaching around different types of obstructions.

It’s difficult to describe the various components, because they are unfamiliar and the system is so new its developers have yet to come up with the final names for all of them. The only recognizable part of the Kirk Wrench is the handle, a reversible breaker bar with an oversize composite grip. After that, there is a static arm or arc, a curved connector piece that accepts proprietary attachments and also standard attachments such as sockets, crow foot wrenches, hex wrenches, and the like. 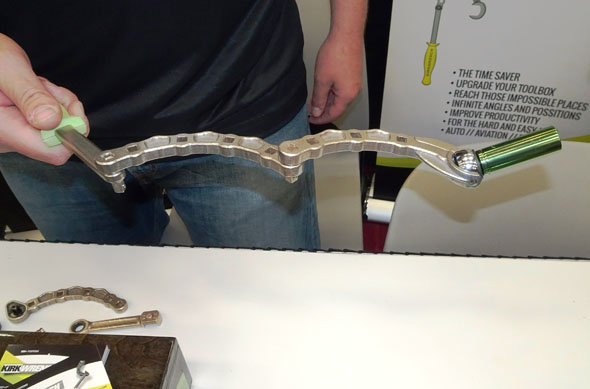 Among the proprietary attachments is an adjustable head that functions as a tight-quarters adjustable wrench, a ratchet, and a pivoting ratchet head that reminds me of the Wera Zyklops. Handles and accessories can be attached at any of the square perforations through the arcs. 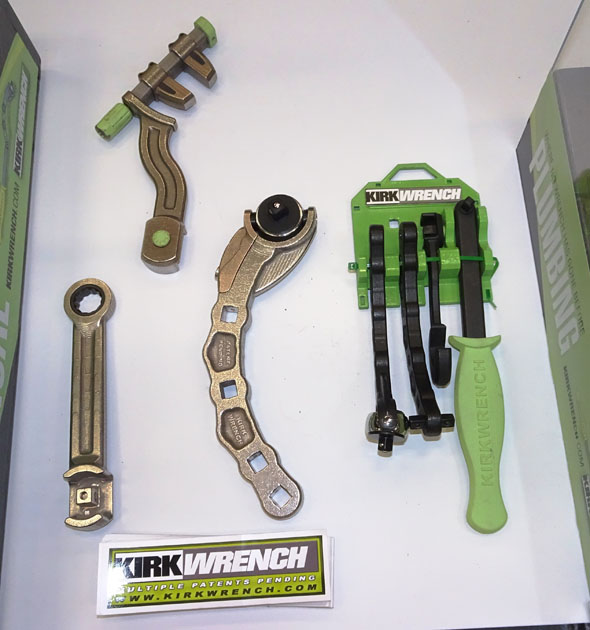 Pieces can be mixed and matched in any number of configurations – the manufacturer says there are hundreds of possibilities – to allow you to work around the obstructions encountered inside cabinets, engine compartments, and anywhere else with restricted access.

The Kirk Wrench is the brainchild of Kirk Hyust, a remodeler who landed a job that involved replacing cabinets and plumbing in a large number of apartment units. The supply lines were so close to the backs and corners of cabinets it was hard to put wrenches on the compression fittings at shutoffs. 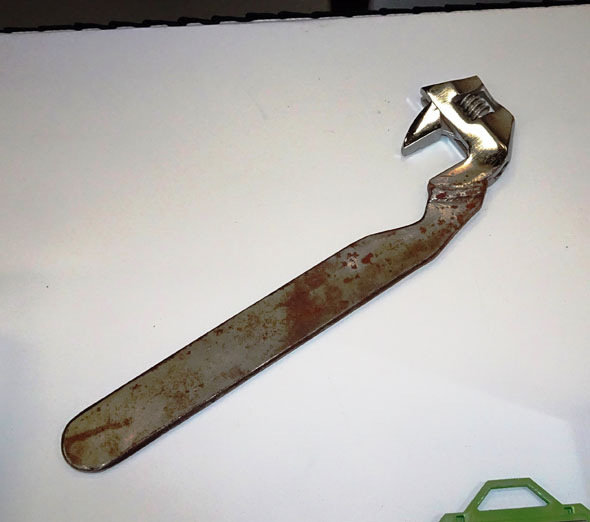 Hyust dealt with the problem by cutting the head off an adjustable wrench and welding it to a handle that came out from the open side—which allowed him to reach around from the back of the valve.

To develop the Kirk Wrench, Hyust joined forces with several friends and investors, among them a mechanical engineer and another who manages auto repair shops. They picture the Kirk Wrench being used by mechanics, building contractors, plumbers, aircraft maintenance techs, and others who often encounter fasteners or fixtures that are difficult to access and turn.

As with many exhibitors at NHS, they were there to find distributors willing to carry their product. If that doesn’t work out, there is always the possibility they’ll sell the Kirk Wrench directly to end users online. They hope to have the product available before Black Friday in November 2017. 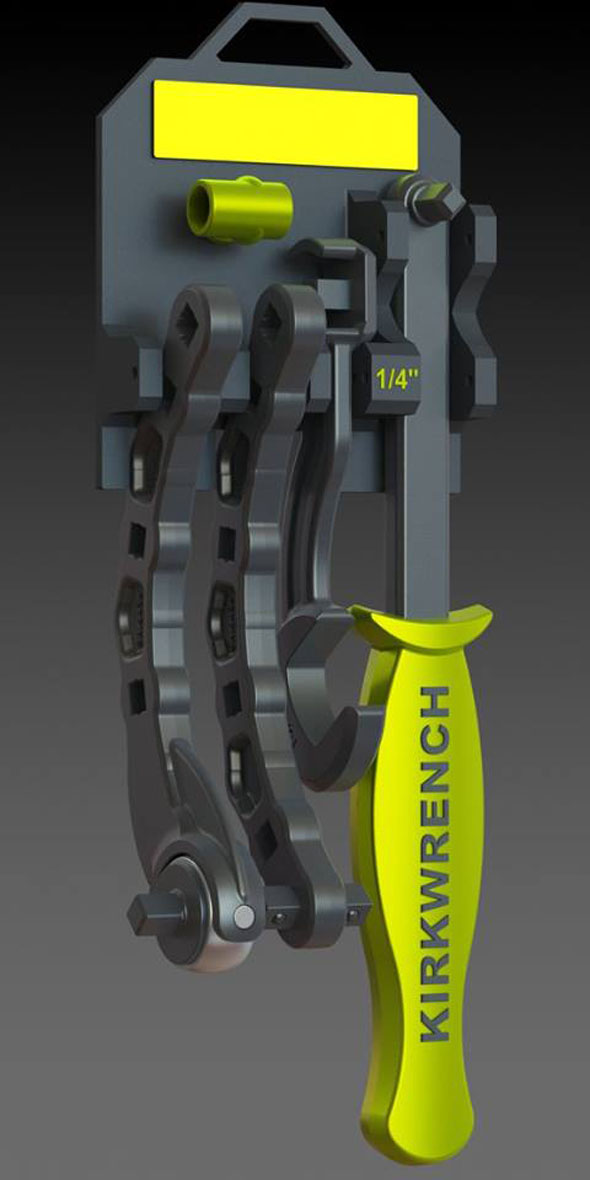 The folks from Kirk Wrench showed me prototypes of a $50 set aimed at DIYers. This set works with 1/4″ drive accessories, and would include a handle, a static arm, and a ratchet. A 3/8″ drive version of the same, aimed at pro users, would sell for about $150.

The company’s Facebook page shows a set aimed at plumbers, featuring a handle, static arm, and an open end wrench fitting that presumably fits compression fittings. It’s unclear what other accessories will cost—though there seem to be plenty with more on the way.

I can see why the product was conceived as a solution to the installation and removal of plumbing compression fittings. They’re never where you can get at them and there is always something in the way. The same may be true of nuts and bolts deep in an engine compartment or piece of machinery.

Do I like the Kirk Wrench? As a concept, yes; it’s incredibly clever and for that reason alone I find it appealing.

Would I consider buying one if and when it becomes available? That would depend on what I was working on. There was a time when I worked on machinery, repaired my own vehicles, and did a fair amount of plumbing work. In those days the Kirk Wrench would have been very appealing.

I don’t picture this being an “everyday” tool. For me it would be the kind of tool that lives deep in the toolbox and comes out when nothing else will work.

Would having a tool like this save you time or effort?