ToolGuyd > Power Tools > Cordless > New Klein “Powered by Dewalt” Cordless Power Tools
If you buy something through our links, ToolGuyd might earn an affiliate commission. 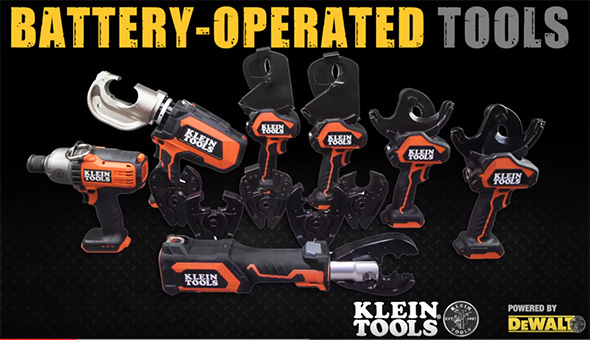 Thanks to a tip by Albert, over at our Facebook page, we learned that Klein has partnered with Dewalt to release a new line of cordless power tools. 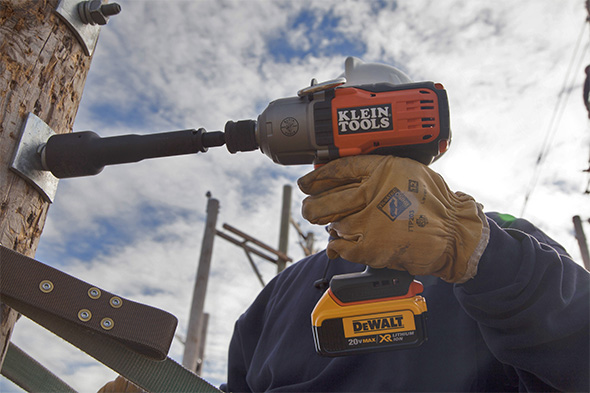 This new line of battery-operated cable cutters, crimpers and impact wrench are engineered to help linemen work more efficiently by reducing time and effort on the job.

All with the performance and durability professionals expect from Klein.

The first wave of tools includes:

There are different configurations and kit options available. If you’re interested, this Klein PDF has tables of the purchasing options and part numbers. 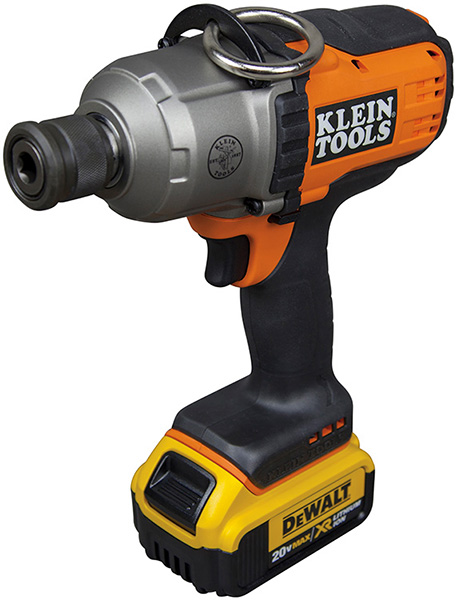 Dewalt came out with electrical trades-specific tools nearly 2 years ago, and several more were launched in late 2017. 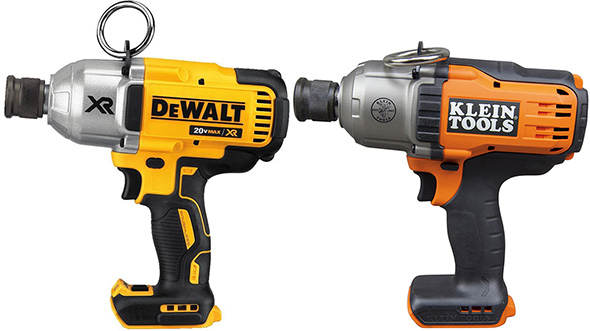 Looking at some of the tools, there are similarities between Dewalt and Klein offerings, but enough differences that they seem to be distinct tools. Take the high-torque impact wrench, for example.

I’m willing to guess that Dewalt and Klein are design and manufacturing partners. Looking at the shape of the tools’ handles, trigger switches, direction selection switches, chucks, and overall motor casing geometry, I can’t imagine that these are made by anyone besides Dewalt.

Some of the kits come with Klein kit bags.

Pricing information isn’t available yet. Looking at the impact wrench, the specs look comparable between Klein and Dewalt tools, but with the Klein being a little difference. For instance, the Dewalt DCF898B, which came out in 2015, has a brushless motor, 3 speed options, and a base-mounted LED worklight.

The Klein doesn’t mention the motor style, but is said to have comparable speed and torque specs, up to 500 ft-lbs of max torque and 0-1900 RPM.

We don’t know if the Klein tools are brushless, but they might not be. If that is true, then I would expect for their pricing to be a little lower than Dewalt’s.

Klein has been reaching into new markets in recent years. Some of their new products have surprised me, others make sense. New pliers? Of course. A 17 quart jobsite cooler? Wireless speaker? I wasn’t expecting Klein to be interested in releasing products like that.

This partnership looks to be a good idea for both brands. Klein has faced increased competition from other tool makers looking to win over electricians and linemen, and this looks to be a strong countermeasure.

Klein is one of the most highly regarded electrical hand tool and equipment brands, and Dewalt is among the most well regarded cordless power tool brands.

Klein wouldn’t need their own know-how and factories to launch a brand new power tool line. But launching a new line of tools that is inherently cross-compatible with batteries and tools from another popular brand? It makes the tools much more competitive.

I would think that Dewalt and Klein worked hard to avoid too much overlap, in order to avoid unnecessary competition between them.

I’ll start asking around for pricing details, and am also interested in learning how the Klein offerings might differ from similar Dewalt tools.

This new Klein cordless power tool lineup definitely makes for interesting news, but it also makes me very curious to see what else Klein and Dewalt might be working together on. The two brands have much to offer each other, and without stepping on each other’s toes too much.

ALSO, keep in mind that Stanley Black & Decker has pledged to bring Craftsman tool production back to the USA, at least as much as they can. Perhaps they’re considering Klein as a hand tool manufacturing partner, at least initially?

There’s also the possibility that Klein and Dewalt’s partnership is only as deep as we can see it. But where’s the fun in thinking that?

Thank you to Albert for the heads-up!